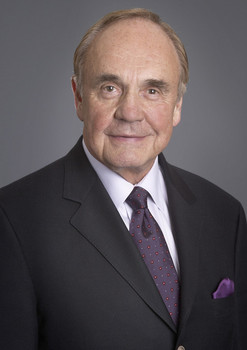 CBS Sports airs their final US Open tennis tournament this month before handing over the entire major championship to ESPN.  As part of the coverage, the network will look back at some of the tournament’s greatest moments while also welcoming a broadcast legend back to the booth for one last match.

Legendary announcer and current voice of the San Diego Padres, 79 year old Dick Enberg, will return to Flushing Meadows during the second weekend of coverage to call a match with John McEnroe and Mary Carillo.  More from CBS…

On Sunday, Aug. 24 (1:30-2:00 PM, ET), CBS will air a special program CBS SALUTES THE US OPEN, looking back at the moments and champions that have highlighted CBS Sports’ 46 years of US Open coverage through the announcers who called the action. Bill Macatee hosts and is joined by Dick Enberg, Tony Trabert, John McEnroe, Mary Carillo and Virginia Wade.

Legendary broadcaster and former CBS Sports US Open play-by-play announcer for 12 years Dick Enberg returns on Sunday, Aug. 31 to call a match along with McEnroe and Carillo. Enberg also will be part of the Network’s final weekend coverage, contributing an essay reliving memorable US Open moments. In addition, a vignette series will air on CBS throughout the tournament celebrating the great US Open moments on CBS through the years. The vignettes also are available on CBSSports.com.

Padres fans will tell you that Enberg still doesn’t have his fastball quite like he used to, but regardless this is a nice gesture by CBS to give Enberg this opportunity.  When it comes to the great broadcasters of all-time, Dick Enberg gets underrated.  His list of accomplishments can stack up to anyone in the history of the industry.  Sunday’s coverage might be worth checking out just to see one of the broadcasting greats call one last tennis match.