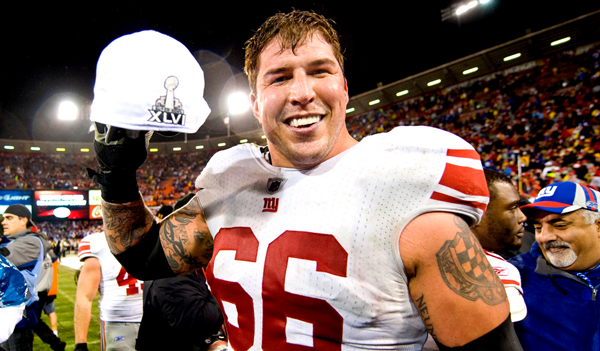 While CBS continues to stick with grizzled veterans like Dan Fouts, Solomon Wilcots and Steve Tasker in their NFL broadcast booths, FOX continues to show that it is willing to give fresh blood a shot in analyst roles. Relative newbies Brian Billick, Heath Evans, Ronde Barber and John Lynch are already on the roster, but now they’re taking a shot with David Diehl.

“We’re really excited to have a former player with David’s credentials join our team of NFL on FOX game analysts,” FOX Sports executive producer John Entz said in a statement this week.  “Our sense is that he’ll devote the same passion and preparation to his new career that he demonstrated in the trenches for 11 years, and he’ll quickly develop to lead the next generation of NFL game analysts.”

Diehl could replace Tim Ryan, who worked with Chris Myers last year but left surprisingly to join the 49ers radio booth. A slot next to Thom Brennaman is also open with the network not renewing Brian Billick’s contract.

It’s an interesting move, because it’s not as though Diehl was considered to be an outspoken player during his 11-year career with the Giants. Then again, neither was former teammate Shaun O’Hara, but O’Hara has become a quality analyst at NFL Network.

I’ve met Diehl a few times covering the Giants, and again, he’s always kept things close to the vest. But ESPN’s Dan Graziano has spent a lot of time in that locker room the last half-decade, and he thinks the 33-year-old has a lot more to offer than some might expect.

One word on why I think Diehl will be good at this: Energy.

Diehl wasn’t the most consistently insightful player to interview in the Giants’ locker room, but I always thought that was because he was such a believer in the Giants’ culture that he was always conscious of not wanting to give away any potential secrets. So he often talked in platitudes rather than giving specific answers to specific questions. However, in a few dealings with him away from the locker room, I found Diehl to be intelligent and thoughtful, and I always believed he had more to offer than he was willing to offer the media in a group setting. Close to the vest can be a smart way to play it in the New York market. Diehl wasn’t going to say anything to get himself in trouble or compromise the team’s chances to win.

But in those same group interviews, Diehl was always, always high-energy. He was always enthusiastic. He was always expansive with his answers, not cutting them off after one or a few words. I think that if you take his natural energy and enthusiasm and combine it with a willingness to offer in the broadcast booth the kind of insight he wasn’t always willing to offer in the locker room, you’re going to have a fine TV analyst. I look forward to seeing how he does, and I have a feeling he’ll do quite well.

Diehl majored in communications at the University of Illinois and attended the league’s annual broadcast boot camp in 2008, so it’s not as though he’s unpolished despite coming straight from the field to the booth. And while a lot of these guys take flak for phoning it in, it appears he’s prepared to work his ass off.

According to Newsday’s Tom Rock, Diehl has been watching games on mute and recording his own commentary, which is something I did when I was, like 12. Awesome.

“I am going to be very statistical, I’m going to point out and know everything that’s going on on the field, but it’s fun. Football is fun. Even when you’re a player you’re out there smiling on the field. It’s going to be no different for me whether I’m in the box talking and watching or whether I was on the field. There are going to be times where it’s intense and you’re into it, but there’s a lighter side of football where funny things happen.”

I promise you, the viewers will appreciate that.