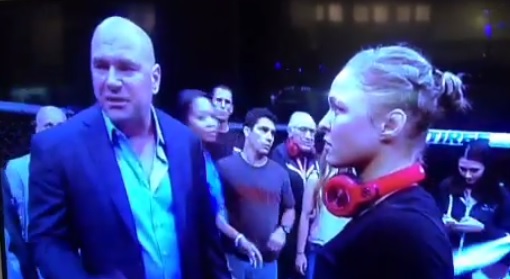 After Ronda Rousey’s amazing 16 second demolition of Alexis Davis at UFC 175 on Saturday night, Joe Rogan conducted his post-fight interview with Rousey as he’s typically accustomed to. At the end of the interview, Rogan put Rousey on the spot and asked if she would be willing to fight at UFC 176, which takes place in just a month. A clearly baffled Rousey was noncommittal, and later confirmed she probably wouldn’t be able to fight at the show because of a scheduled knee surgery.

Once the interview finished, cameras caught UFC president Dana White having words with Rogan, clearly not happy about his color commentator putting one of his stars on the spot. Before asking Rousey, Rogan prefaced the questionby saying that he was told to ask it by someone in the truck. And after the show, White confirmed that he wasn’t displeased with Rogan, but instead the unnamed production member. Here’s the key quote from MMA Junkie.

“I wasn’t upset with Joe Rogan; I was upset with the (broadcast) truck telling him to tell Ronda that she’s going to fight again. That wasn’t true; that was some sh-t that somebody made up back there. It was the biggest idiotic move in the history of our production team.”

Rogan then went onto The Underground, a popular MMA forum, to confirm his boss’s comments and give his take on the situation.

Just for the record Dana wasn’t pissed at me at all. I thought it was actually Dana’s idea when the producers interrupted me to get me to ask that question when I was trying to wrap up the interview.

It’s an interesting situation, and one you don’t see too often in sports. After games, athletes are usually asked the same generic questions, and they typically give the same canned responses. So when someone who isn’t asking the questions tries to shake things up for both the interviewer and the interviewee, I can imagine why the boss would get a little frustrated at the situation. A more polarizing example of this situation is when Heather Cox interviewed Jameis Winston after the ACC Championship Game last December and asked about the rape allegations against him – it was a question that needed to be asked and answered, but was completely unrelated to the situation immediately at hand and made everyone involved feel extremely awkward.

I don’t think the producer pulling the strings of interviewers in situations like this is necessarily in the wrong, but I do think they need to exercise some tact. It does open up some more questions for Fox though about how independent they can be in covering UFC if Dana White has some editorial control over questions towards fighters.