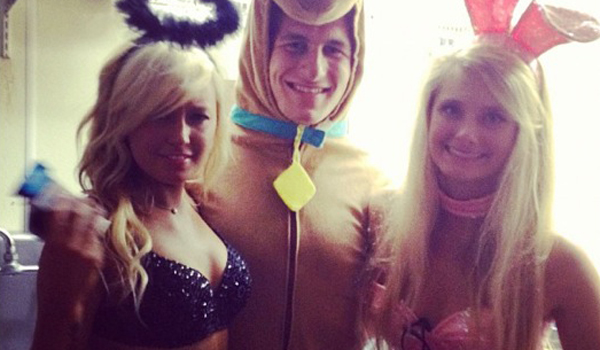 Surprisingly, the earth did not cease its orbit around the sun and go hurtling into deep outer space when the news was broken about Johnny Manziel allegedly being involved in a pier six brawl.  Manziel and his entourage were reportedly involved in a fight when approached by a possibly over-exuberant fan.  The news of the incident was first broken by Cleveland Scene, who acquired a police report detailing the fracas in the wee hours of Saturday morning:

The alleged victim, 33-year-old Sandusky resident Chris Gonos, reported to police that he and his girlfriend spotted Manziel while waiting for an elevator at the high-end apartment complex, where many Cleveland professional athletes live, and professed his love to the rookie quarterback.

Gonos told police he pointed Manziel out to his girlfriend: “That’s Johnny Manziel.” Then he approached him.

According to the report, “at this time victim stated to the unidentified male, ‘I’m the biggest Browns fan ever, I love you, I want to give you a hug.'”

Gonos stepped towards Manziel and was promptly punched in the face, the alleged victim’s account to police says, followed by a beat down by Manziel’s crew, giving the man a “swollen lip, right eye swollen, red face.” A security guard intervened and also was hurt.

Obviously, the news was going to spread like wildfire.  Later in the day, ESPN.com published their own story on the Manziel fight.  And there was no mention of Cleveland Scene breaking the story:

“Browns quarterback Johnny Manziel was involved in a fight in downtown Cleveland early Saturday but is not listed as a suspect, according to a police report obtained by ESPN.”

That perceived snub was enough for Cleveland Scene author Doug Brown to express his dissatisfaction.

And @ESPN credits…. @ESPN for the Manziel story pic.twitter.com/N8l54iFojC

Brown also tweeted Cleveland-based ESPN reporter Jeremy Fowler, who has the byline on the ESPN.com story.  Fowler admitted on Twitter that Brown broke the news, but there’s no mention of it at ESPN.com.  Brown even mocked ESPN’s liberal use of “media reports.”

@dougbrown8 Not at all. You had first.

If you couldn't report a story w/o other's reporting, and add no new information than what the first reported, you cite that. It's simple.

At what point can you blame ESPN for not crediting Cleveland Scene and publishing their own story?  This is the gray area of giving credit for breaking news that many find irksome when it turns against them, especially when it happens to involve ESPN.

It is worth noting that stories on FoxSports.com, Sports Illustrated, Bleacher Report, and Pro Football Talk all linked to and credited Cleveland Scene for breaking the story in their online accounts.  If ESPN and Fowler did the work to obtain the report and verify the story are they still under obligation to credit Cleveland Scene?  That’s open to interpretation.  However, it’s worth noting that other major, national, mainstream outlets chose to credit and link to Cleveland Scene while ESPN.com did not.

And to be quite honest, the most incriminating aspect of this story is ESPN’s sordid history of failing to credit other reporters for breaking news.  It goes back to former ESPNer Josh Elliott remarking that the network was “stealing scoops” from others.  It goes back to Jay Glazer’s run-ins with the network.  ESPN has a reputation of taking the work of others and making it their own, and it’s going to take a lot of effort to change that perception.

Now, ESPN has made progress in some regard.  They clarified their policies on crediting “media reports” and getting rid of the vague “sources” when possible on television.  (The fact that it took until 2013 to do so is mind-boggling.)  Still though, even that policy has come under some criticism as often on ESPN’s bottom line, “media reports” will replace the name of the outlet or reporter who broke the news once it’s been through the news cycle.

Here’s what ESPN said they would try to do to credit outside entities in their 2013 policy revision:

In the current environment of blogs and Twitter, it is often difficult to know definitively who was first to report a story, but it is still important to acknowledge how we initially became aware of that news. So, with a few exceptions, scripts and BottomLine entries will state the news was “earlier reported by” or “previously reported by,” rather than “first reported by,” that ESPN reporter or outside entity.”

Was that standard upheld as far as Cleveland Scene is concerned?  The author who broke the news of Johnny Manziel’s late night rumble doesn’t think so.