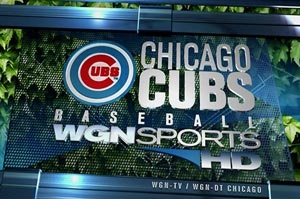 Last week it was announced that the Cubs and other Chicago sports teams would be leaving WGN America after airing professional sports for many years.  There are people all around the country who became Chicago sports fans thanks to the WGN Superstation, but because of cost and a lack of profit, the network is dumping live sports.

The Cubs were the flagship team of WGN on television, but it’s nothing compared to the relationship they have with WGN Radio in Chicago.  Unfortunately, that’s also another relationship that is ending as economics trumps history.  After 89 years in partnership with WGN, the Cubs will move to WBBM beginning next season.  Here’s the story via Chicago based media writer Robert Feder…

Calvin Coolidge was in the White House when Chicago Cubs baseball began airing on WGN AM 720. With the exception of just a few odd years, the National League franchise and the Tribune Broadcasting radio flagship have been synonymous since 1925.

But now one of the most enduring partnerships in sports broadcasting is coming to an end. The Cubs and WGN Radio are splitting up after this season, Jimmy deCastro, president and general manager of WGN, confirmed Tuesday night.

The Cubs are expected to announce Thursday that they have finalized a seven-year agreement to broadcast on CBS Radio all-news WBBM AM 780, starting with the 2015 season. Sources familiar with the deal said the Cubs could move to CBS Radio sports/talk WSCR AM 670 if the Score loses the White Sox broadcast rights after next year.

Sports programming of any kind – whether it be television or radio – has never been more valuable.  But as the price of poker goes up for networks and stations around the country, the potential to lose money on expensive rights deals also increases.  With that in mind, it’s no surprise that the end of an almost nine decade relationship between the Cubs and WGN Radio came down to one thing – money.

While acquiring the Cubs broadcast rights will provide WBBM Newsradio with a unique and reliable source of live, local programming for years to come, it’s not at all certain the new agreement will prove profitable for CBS Radio. The deal made by former Tribune Co. chairman Sam Zell when he sold the Cubs to Tom Ricketts in 2009 has been a financial disaster for WGN, which has lost $6 million a year, according to some estimates. “The economics of the deal that we inherited did not make business sense,” deCastro told me.

Even though the Cubs haven’t won a championship in over a hundred years, they have a loyal, national fanbase in large part because of their relationship with WGN.  It’s a sad day when nine decades of history has to be sacrificed because of economics, but it’s the reality of the world in which we live in.  The Cubs could get more than WGN thought they were worth and that’s why the two sides are parting ways.

But at least it’s better than what we’re seeing in other markets where teams and broadcast partners (cough… Time Warner LA… cough… CSN Houston… cough) are making it more difficult for fans to follow their favorite team.  At least Chicagoans and fans around the country can still see their Cubs play, and that’s more than a lot of other fans can say at the moment.