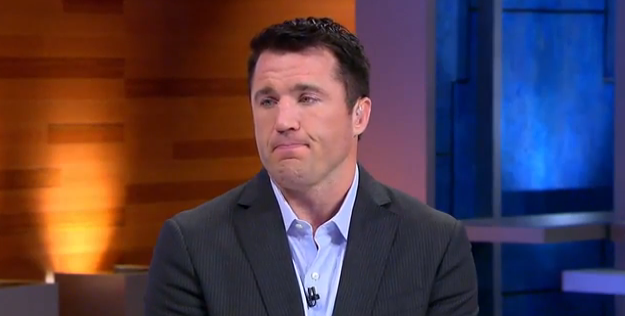 Two weeks ago, UFC fighter and Fox studio host Chael Sonnen used his position on UFC Tonight and Fox Sports Live to trash Wanderlei Silva, Sonnen’s opponent for the UFC card on July 5th, for “running away” from a random drug test. Silva would later be pulled from the fight and replaced by Vitor Belfort, but the damage to his reputation had already been done, with a large assist to Sonnen.

Yesterday, a bit of news broke that set the Internet on fire – Sonnen himself had failed a random drug test and would be removed from the fight with Belfort. Of course, this didn’t stop Sonnen from going on a tour to defend himself and attempt to repair his image – on Fox Sports 1, of course.

During the interview, Sonnen admitted to taking the banned substances, and also admitted that he never disclosed his use to the UFC and the Nevada State Athletic Competition. That’s right – he admitted he took what he failed the test for, and is appealing because it was a random test… which is what the whole issue with Silva was.

Isn’t this ripe? Sonnen goes on a diatribe about Silva ducking a drug test, and then goes ahead and fails a test himself. Regardless of the circumstances behind the failed test, it’s still a failed test. Trying to do all of this damage control is ridiculous, and just makes Sonnen look that much worse. Coming out and saying, “yes I failed, but….” will result in absolutely no sympathy from anyone. After all, Sonnen is a guy who has already been suspended for failing a drug test once (after he nearly upset Anderson Silva to win the UFC middleweight title back in 2010) and has been one of the men on the front lines of the TRT controversy in MMA.

I also think it’s pretty sad that Fox Sports 1 is giving Sonnen this massive platform to plead his case. If this was any other fighter, would he get a 14 minute block on a non-UFC show to provide excuse after excuse? Hell, if this was any other *athlete* would he get this kind of luxury? For that matter, would any other athlete even jump at this opportunity? When most athletes fail a drug test, they simply release a statement, admit responsibility, and get it over with.

Sonnen went on national TV, admitted to failing the test, and then spent the rest of his massive segment trying to explain why his failed test should just be swept under the rug, all after he criticized his would-be opponent for his own drug test saga. It’s absolutely ridiculous.