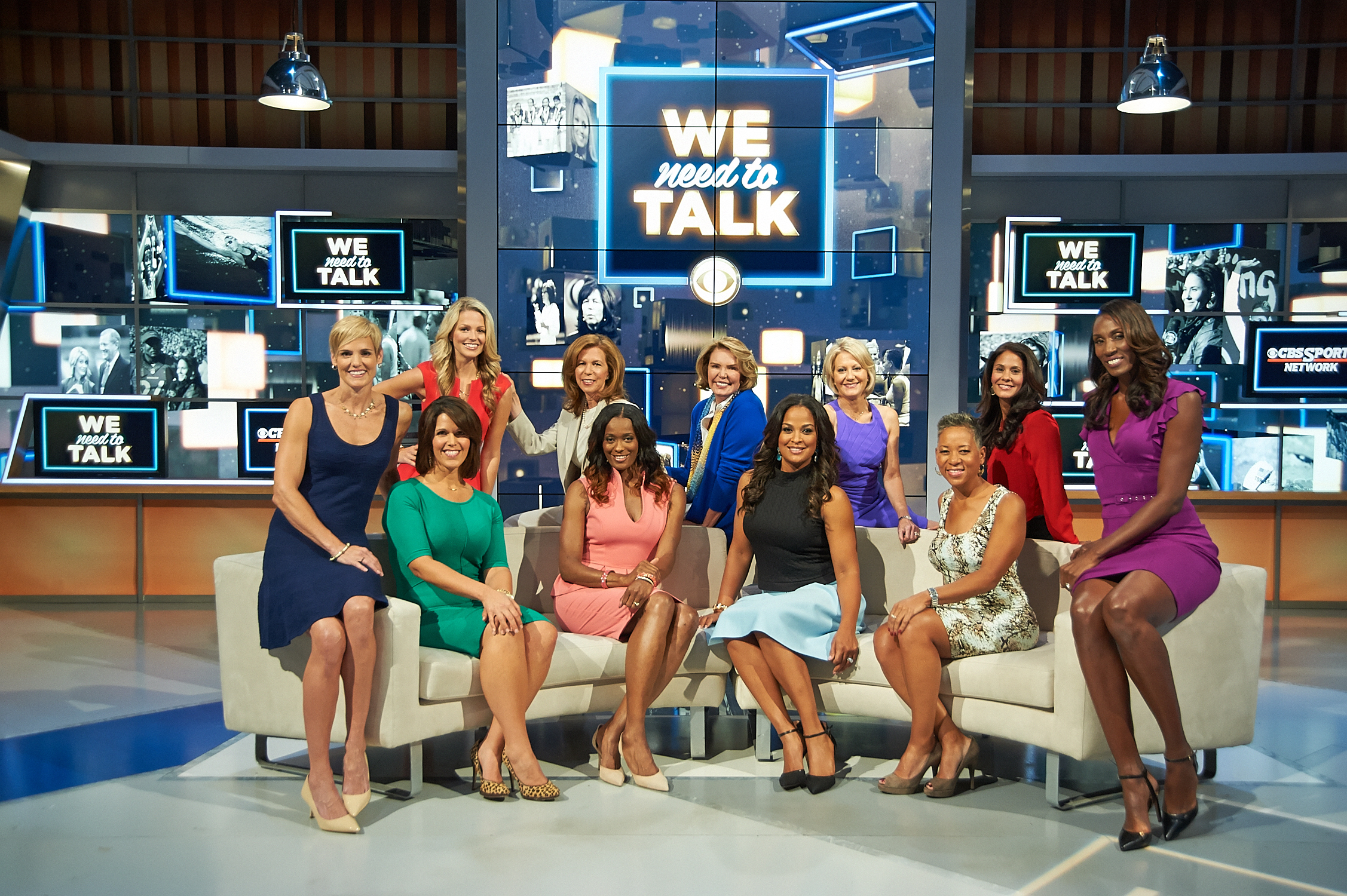 We’ve all written a lot about CBS Sports Network’s We Need to Talk without knowing a lot about it, and that’s because of the show’s… I won’t say premise, but casting choices. The fact is, there’s not a lot known about the show besides an interview here or there and some press releases. There would be a show, it would be about sports, and it would be completely staffed by women.

We finally got to take a look at what the show, which premieres tonight at 10 p.m. ET on CBSSN, will look like yesterday, and it’s hard not to believe it won’t produce something worthwhile, if not set fire to any ratings measures. CBS Sports Network isn’t rated and has ordered the show in what it’s calling “flights” rather than seasons. The first one will run for 11 weeks, which will take it through December 16th, but it’s implied that the show has been ordered for follow-up “flights” beyond that.

That then poses a very important question… with so much attention given to the show’s casting choices, and with no ratings by which to measure audience engagement, what will make We Need to Talk a successful show?

“I think [CBS] just want to get this show on the air,” said coordinating producer Emily Deutsch, who’s also the VP of original programming at CBS Sports. “It’s great that we’re the first and it’s kind of surprising that we’re the first. I think they want the show to evolve and develop and become a really good show. We hope it comes out of the gate great, and sometimes shows need to evolve, but I don’t think there’s ratings involved.”

“I guess if it’s interesting, and if we’re bringing another voice to this discussion, I would think that that’s a success.”

That’s getting around to the real point of why We Need to Talk exists, and maybe needs to exist despite those who think we’ve moved beyond the idea of an all-women’s show about sports: there seems to be a lack of female voices at the table in what is currently in the zeitgeist, the discussion of domestic violence and crimes of those nature committed by athletes. Aside from Outside the Lines, very few seemingly have given equal time to women on an issue in which they should very much be involved.

“The timing is a bit ironic,” says Suzanne Smith, another coordinating producer and the only woman currently directing National Football League games on television. “Hopefully people will be craving these women’s voices now more than ever.”

The show was planned long before Ray Rice or Adrian Peterson or even the recent controversy regarding the coverage of Hope Solo — all topics that are currently on the docket for the first episode — but the fact is the show feels like one that, even if it seems like something we should be past, balances things out in terms of who we’re hearing on these issues.

“I feel like anytime would’ve been the right time,” points out Laila Ali, who followed in the family business of being a champion boxer and is married to a former NFL player. “It’s just a coincidence, this did not happen overnight. This has been in the mix and it was meant to happen now. There are some topics we can discuss and give a different point of view that hasn’t been touched on before. But there’s so much more, also that’s positive about sports — not just women’s sports — and we’re excited to celebrate that.”

Fellow contributor Andrea Kremer noted “The day after the Ray Rice video came out, a couple of us talked and said ‘Oh my god, can you imagine if the show came on tomorrow?”

“The show’s been in the works for a year, and we’ll still have different opinions than anyone else out there.”

For Kremer, a veteran of everything from the NFL sidelines to the Olympics to Real Sports with Bryant Gumbel, the show definitely feels overdue. “It’s not as if I woke up all of a sudden with these opinions. we’ve always had opinions and amongst ourselves talked about it, now we just get to do it in public.”

The format of the show will feature six or seven segments with various discussion topics, hitting on the hot sports news of the past week. That means that it will be what’s relevant in sports, and while female athletes will be certainly celebrated, the show is primarily about whatever’s making front page headlines. The producers also said to expect feature stories and other forms of journalism throughout, as well as a guest segment.

The show will, however, try to make the stories of the women on the show (the full cast also includes Olympians like Dara Torres, Summer Sanders and Swin Cash, as well as reporters from mixes of TV and news journalism backgrounds like Lesley Visser, Kremer and Tracy Wolfson) personal and unique in a segment producers are calling ‘Turnback Tuesday.’ Smith describes it as “these women telling their stories about their careers and their experiences. It’s a breath of fresh air, hearing from these people. Talking about not just other people, but their experiences.”

“The hope is that whatever we’re discussing, we’re bringing a different take to it,” says Deutsch. “Hopefully, the talent brings their view as young girls, women, mothers, daughters to the topics. It will be some of the same issues that are being discussed elsewhere, but we really hope to bring women’s voices out.”

Another potentially refreshing aspect of the show is that it won’t be a factory of Hot Sports Takes. The cast — which rotates between four and five of the 12 main members after tonight’s premiere — will be chosen based on who can best comment on what’s in the news. Simply put, if a commentator is not originally scheduled on the show but something within their field of expertise breaks a day before and they’re available, they’ll find a way on and vice versa. Call it flex scheduling for talent, I suppose. “We want them to discuss what they’re comfortable with and passionate about to take the story to another level,” says Deutsch.

You get the sense that this is a passion project for everyone involved. People like Smith, Kremer, Torres, Visser (a Pete Rozelle Award winner), Ali and pretty much everyone in front of and behind the cameras have all accomplished tons in their field. The show has the backing of the network, and yesterday’s media session saw an army of public relations people as well as CBS Sports Chairman Sean McManus.

“I want it to succeed for all those little girls on lacrosse teams and basketball teams who sit down and watch ballgames with their dads and their moms who want to get into this business,” said Deutsch, “and have been relegated to three minutes during a football game, and I think it’s really time for women to have a real platform, and it’s time for women to have more of an opportunity than three minutes during a football game. When you’re a little girl and you’re looking for these role models, hopefully that’s what this show provides.”