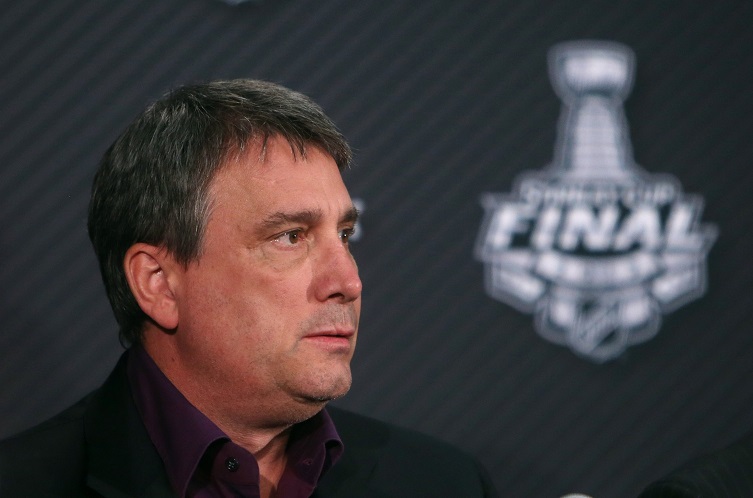 Who can forget Cam Neely flexing his acting muscles as Sea Bass in the cinematic gem Dumb and Dumber? Well, now that Dumb and Dumber To is a real thing that is actually happening with an official trailer and release date, we’re waiting with baited breath to see whether or not Neely will reprise his role as bully Sea Bass.

In an interview with the Boston Herald’s Jen Royle, Neely said that he had shot a scene for the movie but didn’t know whether or not it would end up on the cutting room floor:

Off the ice, word is that Neely will make an appearance in “Dumb And Dumber To” — the sequel to the popular comedy flick staring Jeff Daniels and Jim Carrey. He confirmed that he did indeed tape a scene, but is unsure if it’ll make it to the big screen.

It would be unfortunate if Neely’s scene got cut. You can’t have Harry and Lloyd without Sea Bass! Neely told Royle that after his Bruins had been eliminated from the NHL playoffs, he was approached about a scene that made sense for him and that he could shoot in Boston.

Now, some truth. I watched the official trailer for the movie and it was pretty painful. Jeff Daniels and Jim Carrey look really OLD – their (somewhat) youthful appearance is part of what made the first movie so endearing. Twenty years later, Daniels is 59 and Carrey is 52. The premise for the sequel is that Harry finds out he has a daughter who Lloyd finds to be hot, and suggests they hit the road to try and find her. According to IMDB, they also do it for one of her kidneys. I’m so confused.

It will be interesting to see how this movie performs at the box office. Will all those who loved the first one so much be willing to sacrifice two hours of their lives if this movie turns out to be as bad as Anchorman 2?