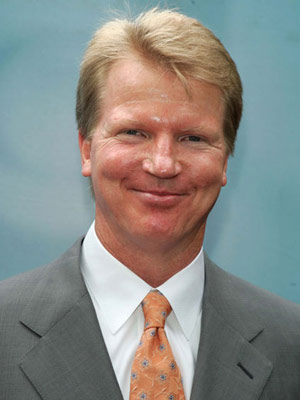 Jim Nantz and Phil Simms have called plenty of Denver Broncos games over the years given the team’s long-term success.  And now Broncos fans are coming together to gently ask CBS to never have them call another Denver game again, specifically the former Giants quarterback.  Nantz can stay.

Broncos fans (apparently) think Simms has a deep-seeded bias against their team.  Perhaps the victory in Super Bowl XXI wasn’t enough.  Perhaps John Elway snubbed him at a social gathering one time.  Perhaps he just doesn’t like high altitude or he’s jealous of all of Peyton Manning’s commercials.  But for whatever reason, Broncos fans think Simms has it out for them… so much so that over 17,000 fans (!!!) have signed an online petition to ban Simms from calling their team’s games.  SB Nation’s Mile High Report has another 5,000 fans that want to see him banned voting in a poll by a 90-10% margin.

We do not know why he is assigned to the Broncos games every year. It is sure and complete torture for Bronco Fans to have to listen to his biased drivel every week. Please sign this petition so our voice can be heard. We are tired of Phil Simms in Denver!

Is Phil Simms the mastermind behind some sort of vast anti-Denver Broncos conspiracy?  Did he feed Russell Wilson and Pete Carroll inside information from secretive meetings before last year’s Super Bowl?  It’s… kinda doubtful.  Moreover, perceived bias aside, Simms may actually be a good luck charm for the team.

FYI. Broncos have won 10 straight with Nantz-Simms in the booth. You wanna mess with that mojo?

I get it though, every fanbase thinks every announcer is biased against their team.  If I had a nickel for every time I heard an Ohio State fan say Brent Musburger was biased against the Buckeyes I’d have enough money to buy the Denver Broncos.  Thinking the announcers are against you is every bit as part of being a sports fan as wearing your favorite jersey or spending an obscene amount of money on nachos at the stadium.  It’s these kind of zany conspiracy theories that put the “fan” in fanatic.