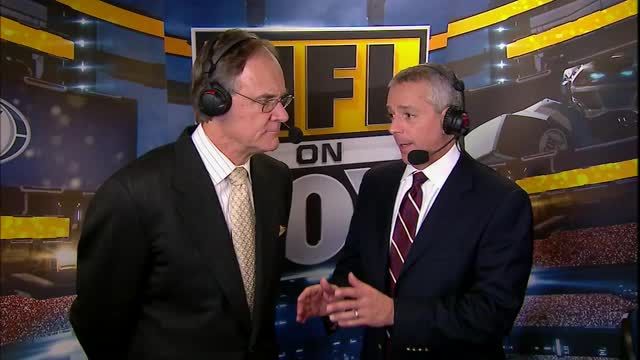 A year ago, it seemed Brian Billick was on the rise at Fox Sports. That stemmed from the fact he and broadcast partner Thom Brennaman were given a chance to do a 2012 NFL playoff game in place of the network’s “B crew,” made up of Kenny Albert, Daryl Johnston and Tony Siragusa.

But in January, Billick and Brennaman were back on the sideline, with Kevin Burkhardt and John Lynch instead drawing that second divisional playoff game for Fox. It’s possible that Billick, who really struggled in the limelight of that Seahawks-Falcons playoff game, botched his one big chance, falling out of Fox’s good graces.

Sure enough, the network has decided to go in a new direction.

The Big Lead reported, and Fox confirmed, that the network would not renew Billick’s contract for the coming season.  Fox’s Dan Bell told PFT, “We appreciate Brian’s contributions over the years to the NFL on FOX and wish him the best.”

Billick is still a solid analyst who tells it like it is, so this is surprising. Fox has worse color guys on its roster. Much worse. In spite of those notable missteps, Billick was still one of the better analysts at the network.

Where could the former coach land? The problem for Billick is that CBS has a much deeper group of color commentators, so he won’t likely be able to walk into a similar job there (unless they want him to replace Dan Dierdorf alongside Greg Gumbel). Expect to see the 60-year-old on NFL Network, whom he has also worked for quite frequently since being fired by the Baltimore Ravens in 2008.

This leaves a void for Fox, which is left with Lynch, , (Ryan left Fox to join the 49ers radio team), Ronde Barber and Heath Evans behind Troy Aikman and Moose Johnston in the presumed pecking order. They could shuffle things up in order to place Brennaman with someone with experience, but they’ll need a newbie regardless.

Three “up-and-comers” who immediately emerge as candidates: Scott Fujita, Randy Moss and Brian Urlacher – all of whom were hired along with Barber last year in order to stack the Fox Sports 1 lineup. Fujita in particular is someone that could make sense as a person that might be able to make the transition from the studio to the broadcast booth. I’d expect one of those guys to get the first shot at replacing Billick before Fox considers looking elsewhere.