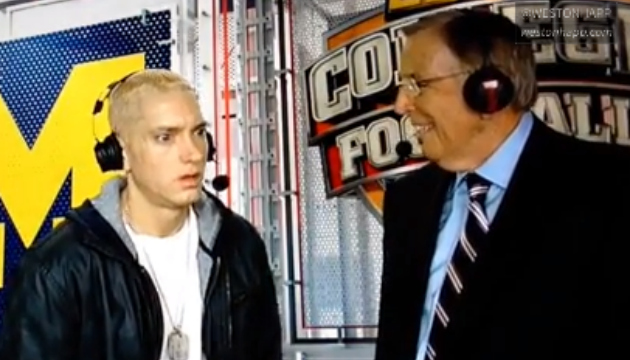 It seemed inevitable. Brent Musburger, the 76-year-old broadcaster whose contract was expiring, would be pushed out of his prime slot of Saturday night college football on ESPN and either become the lead voice of the new SEC Network or move on to greener pastures. Luckily for Brent and his adoring fans, ESPN signed him on with the SEC Network. He will swap his usual partner Kirk Herbstreit out for another gelled beauty Jesse Palmer, and travel around the South this fall, calling football.

Musburger is being phased out to presumedly make way for Chris Fowler or Rece Davis, longtime ESPN company men who deserve a shot at the No. 1 play-by-play slot. But after the decision was announced on Wednesday, Musburger handled the transition with aplomb, graciously accepting his new position with excitement, rather than disappointment.

In a conversation with Sports Illustrated's Richard Deitsch, Musburger spoke about his new job description as a rare new opportunity, at his advanced age.

"It's the attractiveness of the SEC, the passion, the stadiums and the talent that is down there," Musburger said. "I'm going to be 75 in May. You can take someone who is 75 and tell them, 'Hey, it's been great. You did a terrific job. Thank you very much but we have to move in another direction.' I get that. It happens in corporate life all the time. So if this was a good time for them to take a different direction, they should go for it. I'm delighted to be offered a three-year deal when I am 75 years old. I love going to games, I love the excitement and I want to continue. It is a heck of an opportunity for someone who does not want to play golf every day."

He'll be able to call high-profile SEC games, and visit places he has never been, like Oxford, Miss. Musburger will call 15 SEC games this fall, including an SEC-affiliated bowl game, but won't be involved in any of the upcoming College Football Playoff games, according to Deitsch.

"Obviously, I was disappointed I was not going to be doing one of the semifinals and the final,"Musburger told Deitsch. "But I also know that was not going to change anything. It was time to take a different challenge and move on. Did I sit around and cry about it? Absolutely not. There's no need for me to look back. I have to look forward."

It is a shame that Musburger won't be doing the new College Football Playoff national title game. For a veteran, long-serving broadcaster like he is, Brent deserves a chance to be a part of that college football and broadcasting history, but ESPN felt differently. Fowler and Rece Davis, or Sean McDonough or countless other announcers will all be vying for those games.

But the bright side to this move is that Big Game Brent will not change anything about his approach to broadcasting games, including the sly gambling references, as Musburger told AL.com's Jon Solomon.

"I'm certainly not going to change who I am or what I am. I'm going to be very aware of that. I don't think [gambling] the most important thing we put out there but I think it's part of the attraction of football. I'll be 75 in May. I'm too old to change."