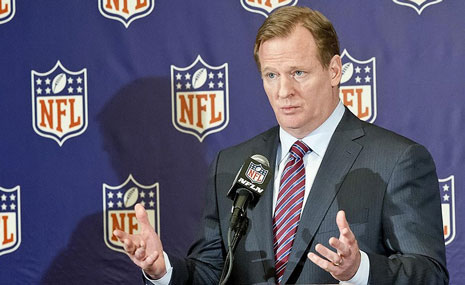 In 1983, Christine Brennan covered Miami-New York Jets in the AFC Championship game for the Miami Herald. She received her credential from a young man who was working for the Jets: Roger Goodell.

Years later, Goodell told Brennan, “I think I handed you your credential.”

Fast forward to Tuesday evening, and Brennan, the national sports columnist for USA Today, is on the phone with the NFL commissioner. How did she get the interview everyone wanted? She thinks it had something to do with a relationship with not only Goodell, but also NFL PR chief Greg Aiello that dates back more than 30 years.

“I think the fact that we’ve known each other for such a long time was a huge factor in this,” Brennan said. “There’s an advantage to being around a long time and having some trust built up.”

Brennan, though, stressed it isn’t as if she is close to Goodell or has regular contact with him. Also, if you read her columns on the Ray Rice debacle, she has been as hard on the commissioner and the NFL as anyone out there.

“I don’t spend any time trying to figure out why anyone talks to me,” Brennan said. “If someone wants to talk to me, I’ll listen.”

Brennan initially made a request to speak to Goodell in July. Nothing came of it. Then when the latest Rice video was released Monday, she put in a request to Aiello on Monday and then again on Tuesday.

Aiello replied on Tuesday, telling her Goodell would be available. She spoke to him at 6 p.m. ET for 14 minutes, 28 seconds.

“Nothing was off limits,” Brennan said. “I honed in on things that troubled me and asked him about it.”

Brennan opened by asking if Goodell had seen the elevator video prior to the TMZ disclosure? Goodell said no to that question and two follow-ups.

Brennan then asked, given what everyone saw in the first video, why should anyone have been surprised by what occurred inside the elevator in the second video?

“To me, that is the crux of this,” she said. “I’m still trying to figure out as a columnist and a person why it took the second video for the NFL to do what should have been done after the first video?”

Brennan pressed hard, asking a variation of that question four times. Goodell replied that there was some ambiguity about Rice’s testimony prior to seeing the second video.

Brennan asked a few more questions, including whether Goodell felt his job was in jeopardy. He said no.

Then Brennan quickly wrote her story.

It all happened so fast that Brennan didn’t have time to reflect on her performance until Wednesday morning. Was she satisfied with her interview and Goodell’s answers?

“I don’t know if you’re ever satisfied,” Brennan said. “This story went from 0 to 60 (this week). So I don’t know if I’m satisfied with anything right now…I had no idea this (interview) was going to happen until it happened. I addressed all the issues I felt strongly about. In (14 minutes, 28 seconds), I felt I absolutely did the best I could do.”

One more thing, Brennan added, at the end of our conversation.

“From my point of view, (getting the interview) was good, old-fashioned journalism,” Brennan said. “You ask and then you ask again. I asked in July. I asked on Monday. I asked on Tuesday. You keep asking. Often in journalism, that’s exactly what it is.”