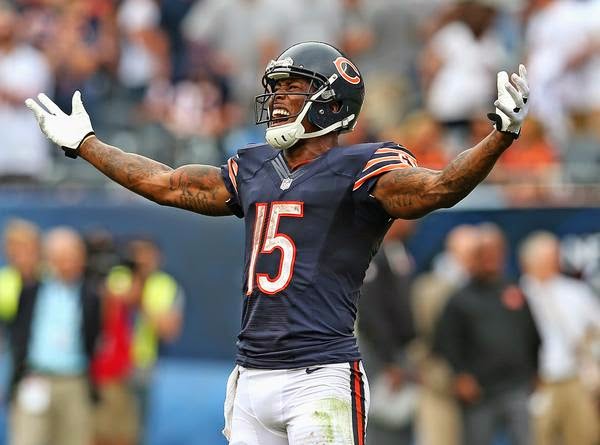 Raiola is suspended for the final game of the regular season after stomping on Bears defensive tackle Ego Ferguson this weekend, following this cheap shot.

On Monday, Marshall went on his radio show on ESPN 1000 in Chicago and ripped Raiola for his actions, according to Michael Rothstein.

“One game, one game, one game? That’s terrible,” Marshall said. “I don’t even know Ego’s injury. Is he OK? What if he broke it? What if he broke his ankle? If he breaks Ego’s ankle, and Ego never plays again, how much money does that guy miss out on? This is what he does for a living. This is what he’s done all his life. He’s what, 22, 23? He doesn’t even know his purpose yet. He doesn’t even know what he’s gonna do after football. He’s still figuring out what life is about. …

“He should be banned from the NFL. A couple years ago, you guys know that I advocate for mental health. So two years ago … see, a lot of people [ask], why do you call Detroit [Chicago’s] little brother? I apologize again, Detroit. I retract that statement. But I was really mad at him because in the game, I’m just warming up, I’m just standing there. He’s like, ‘Go take your medicine. Go do this you freaking weirdo, you freaking crazy guy. Go take your medicine.'”

These comments are particularly troubling because Marshall has been so outspoken about his mental health and spreading awareness. He’s not only been successful on the field as a player, he became the first active player to become a regular analyst on Inside the NFL this year.

Marshall wasn’t done, continuing to rant on the radio about the Lions center, per Michael C. Wright of ESPN.

The NFL is a gladiator sport and requires a certain amount of intimidation. Perhaps Raiola thought his trash-talking would be a good way to achieve that. If that’s his excuse, he is guilty of being an idiot. Even in the realm of professional sports, there is a certain level of universal respect and tact, something apparently lost on Raiola. If Marshall’s story is true, then Raiola is a classless person on top of being a dirty player. For the record, the NFL stated the stomp on Ferguson is Raiola sixth safety-related rules violation since 2010.

Despite this being his first suspension, Raiola has been fined before. While this didn’t draw a fine, here’s another example of Raiola playing like a chump, diving at Zach Moore’s knees during the conclusion of Detroit’s loss to the New England Patriots, per Larry Brown Sports.

Following that game, respected Patriots veteran Vince Wilfork had the following to say about Raiola, via the Boston Herald:

“I didn’t see anything,” Wilfork said. “I just heard what happened, but that was stupid. I didn’t see it, but from what I heard. You’re taking a knee. They’d get mad if we were just (trying) to blow up one of their players, so I mean, it’s just uncalled for. But at the same time, you always have to protect yourself, so you always have to play with your neck on a swivel and being alert for 60 minutes. And it came down to it today on a bonehead play like that, but luckily no one got hurt and we can move on.”

Raiola also appears to be a piece of work off the field. In 2012, Raiola was accused of not paying child support for two months for his then 5-year-old son, according to Pro Football Talk. Additionally, the Detroit News reported Raiola had a child out of wedlock in 2007, a few months before Raiola’s wife gave birth to their third child.

Need more proof Raiola won’t be up for Man of the Year awards soon? In Oct. 2013, Raiola was accused of yelling insults pertaining to sexuality and physical appearance at the University of Wisconsin marching band during a game at Lambeau Field against the Green Bay Packers, per Rothstein. The following week, Lions president Tom Lewand apologized for Raiola’s actions, according to the Wisconsin State Journal. Band member Zach York typed the following on his Facebook account:

“Dominic Raiola is literally the worst person I have ever had the fortune to encounter.

After marching down the field awaiting the national anthem, he went off on a verbal tirade, among other things, questioning my sexuality (as a band member) and then continued on to bring my sister and my recently deceased mother into the conversation. After I refused to give him the satisfaction of turning to look at him, he switched targets to a trombone ranting at him calling him overweight and saying he can’t play a real sport.”

Raiola’s contract expires following this season. At 35 years old, maybe the NFL can finally be rid of this clown.