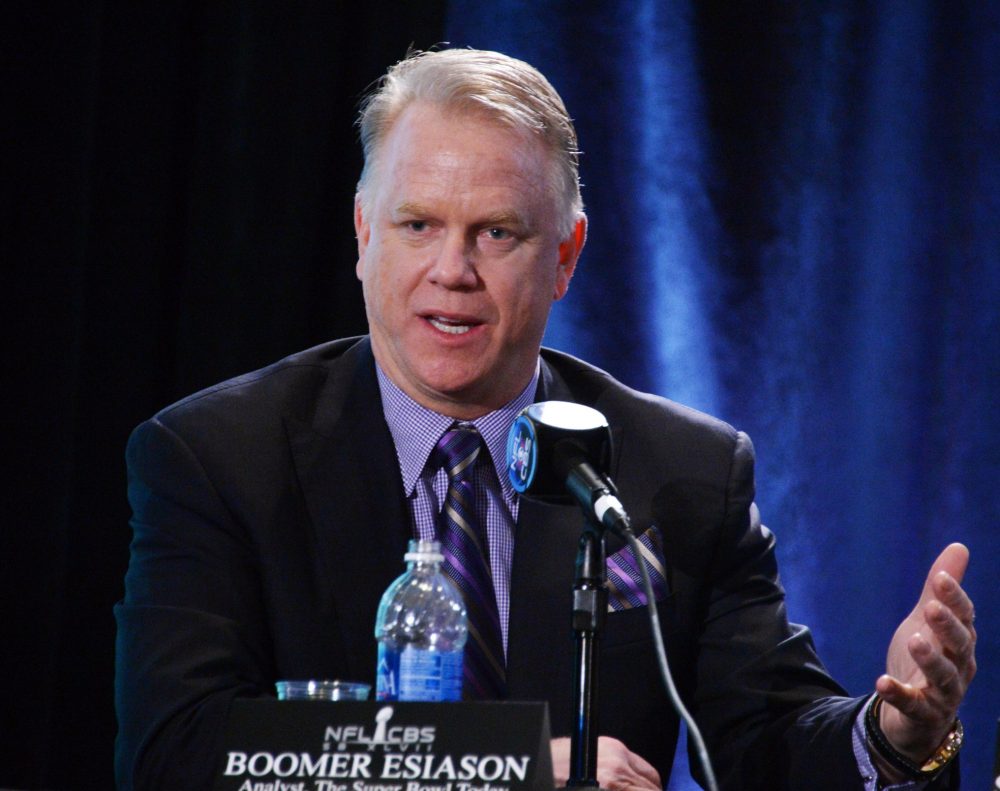 NEW YORK — Boomer Esiason likes to talk. This is a good thing for the retired NFL quarterback turned CBS football analyst, sports radio co-host, Westwood One broadcaster and cystic fibrosis crusader. The former Jets, Bengals and Cardinals quarterback talks about sports for a living. But sometimes his talking gets him in trouble. Esiason shared some of his most memorable media missteps as well as other entertaining anecdotes during a candid Q&A session at the Chase United VIP Lounge the day before Super Bowl XLVIII in New York.

In his role as a studio analyst for The NFL Today on CBS, Esiason opines on the game he loves every Sunday alongside host James Brown, Hall of Fame quarterback Dan Marino, former Steelers head coach Bill Cowher and outspoken former Broncos tight end Shannon Sharpe. Esiason has become known for his straight-shooter approach which has received some attention from the league, particularly when it comes to criticizing the league’s officiating.

“It was a game between Indianapolis and the Bengals and the Bengals ran the play in from the two yard line and Benjarvus Green-Ellis got tripped off by the Colts and he fell short of the goal line,” Esiason recalled about the game on December 8 officiated by notoriously incompetent referee Jeff Triplett. “They wanted a replay so the official had to go underneath the replay hood and look at the play. I figure he’s going to come out and say the play stands as it was called on the field, down on the one yard line it’s not a touchdown. But he comes out and blows everybody’s mind and says, ‘Touchdown, Bengals.’ If you’re the Colts you’d be pissed off. The Colts went on to get blown out that day.

“They came back to us at halftime and I was livid,” Esiason continued. “I was screaming about this official. ‘They should fire him! There’s no way he should be a part of this game.’ I’m getting a call from the NFL, ‘Cough, please, can you calm down a little bit?’”

It might get him in occasional trouble, but Esiason loves his broadcasting life after football, when he played 14 seasons and passed for nearly 38,000 yards and 247 touchdowns, amassing a QB rating of 81.1, making four Pro Bowls and winning the 1988 MVP. And the lefty did this for the Jets, the Bengals and the Cardinals, “otherwise known as the Bermuda Triangle of the NFL,” he quipped. Esiason explained the perspective he tries to bring to the studio.

“I think I try to speak from a fan’s point of view,” Esiason said. “We’re all frustrated. We all love our teams, we all have our teams that we want. I get a lot of angst from players, coaches and referees and the league sometimes will call me and say ‘You were a little over the top with that’ and I’ll say, ‘Well, fix the problem and I won’t have to talk about it.’”

Esiason also opened up about another time what he said on the air famously got him in trouble — with Dan Marino, one of his co-analysts at The NFL Today. Marino is a Hall of Famer but has been labeled the best quarterback to never win a Super Bowl. This proved to be a touchy subject following the 2004 AFC Championship game in which the Patriots and Tom Brady defeated Peyton Manning and the Colts. Following New England’s win, Esiason had the last word during the post-game commentary.

“They came to me and they asked me so what do you think?” Esiason recalled. “I say, “Well, you know what it’s unfortunate but Peyton Manning’s going to go down as this generation’s Dan Marino.’”

“Marino thought I was insulting him and smoke starting coming out of his ears,” Esiason said. “‘What are you saying? I went to a Super Bowl!’”

Esiason explained the context surrounding the comment which seemed to be an insult.

“He didn’t understand immediately what I was saying to him, it was a very uncomfortable awkward moment,” Esiason said. “What I was trying to say is that even if you’re perceived to be the best player of your era which Dan was, which is hard for me to say, because I was a contemporary of his, right? You can’t win the Super Bowl or MVP without having great teammates and a great team around you. That’s all I was trying to say.”

Of course the incident blew up the sports radio, television and blogosphere. This was before Twitter — can you imagine the hell that would have broken loose?

“The next day on AOL was the big question of the year — if Peyton Manning is this generation’s Dan Marino then who is Tom Brady? And that was Joe Montana. This thing lingered and lingered and lingered to the point finally where I had to say I was sorry to Dan on the air. But that’s the way it works in television.”

Esiason now deals with controversy and harsh words from plenty of critics — the anonymous ones on Twitter. He had a few words to share about Twitter fights and the perils of social media.

“Those of us in the media live in that world as well and everybody’s got an opinion,” Esiason said. “[When I make my game picks], the amount of people that attack me on Twitter is incredible. And some of the mean things they say — your hair sucks, you’re fat, you can’t talk, I hope you die tomorrow. I hope you get SIDS at the age of 52. It’s insane. You can get caught up in that. I can understand how players get caught up in it and they can make a mistake and go after these people. I always try to say on the radio I would always favor a little bit of caution when getting involved in Twitter fights.”

Talk of Twitter fights and criticism naturally led into a conversation about Richard Sherman, the Seahawks’ polarizing All-Pro cornerback who engaged with his haters on Twitter following his famous (or infamous) post-game interview with Fox reporter Erin Andrews.

“The problem with Richard Sherman is that now he takes on the attacks and he responds to it and that lets us into a really dark side of the Twitter world, of the social media world. You see just how vile and mean and disgusting people can be when they’re anonymous. I always say to young players today, don’t get caught up in it, don’t exacerbate the issue, create more of a media firestorm,” Esiason said.

As a co-host of “Boomer and Carton,” a nationally syndicated sports talk radio show which is also simulcast on CBS Sports Network every weekday morning, Esiason is no stranger to media firestorms. But any controversies or problems won’t be between the former quarterback and his loudmouth co-host, Craig Carton. The two have been radio partners for over six years and Esiason has learned to appreciate his role as a straight guy and as an entertainer.

“There’s a lot of back and forth that goes on. There’s a lot of insulting of me that goes on,” Esiason said. “He’s like my little brother. He’s always feisty, getting in trouble and I’m the older guy that calms things down. But we’ve never had a cross word between one another. When we leave the studio, we feel really good about the shows that we do and don’t take any of it seriously. The way I look at it is we’re entertaining people going to a miserable job in the morning. So we have to make people laugh. And if I have to be the foil, I’m more than happy to be the foil.”