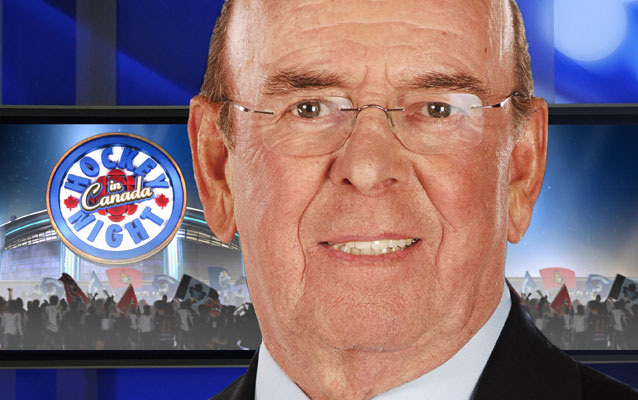 It is the the morning of a National Hockey League game at Madison Square Garden, and Bob Cole is very happy to be here. Not “happy to be alive” happy. He is “there is a hockey game tonight” happy. I realize this as he describes to me the process of talking to coaches before and after the morning skate, something he must have done thousands of times before, with the same zeal and appreciation that he probably had decades ago.

“It makes you feel a part of it, it’s something I’ve done forever, when I was starting out at home,” he says, referring to his early days in Newfoundland. “Talking to the coaches and finding out who’s playing, with whom, all the line combinations, defense pairings. I suppose you could go on your own and watch the warmup and do it yourself, but… you feel part of it, you know? The coach tells you ‘Here’s who I’m playing’ and you just feel good about getting ready for the game. Any other homework, you can do on your own, but you’re confident. Once you’re comfortable, you can enjoy the game. Live the game with the players.”

Cole, who’s been broadcasting hockey since 1969 (at CBC radio, where he called the famous Summit Series for in 1972), and doing it on television since 1973, has an unwavering excitement and even nervousness for hockey, even now.

“I still get the butterflies. It’s amazing,” he stops and chuckles briefly. “You don’t think about it, but… they come.”

Cole was the main voice of Hockey Night in Canada for nearly three decades, calling a ton of Toronto Maple Leafs games when they were annual contenders in the Stanley Cup Playoffs. While many Americans often associate the highest-rated program in Canada with Don Cherry (whom Cole joked was the one man he probably won’t outlast at Hockey Night, “I don’t think anyone can do that”), it’s Canadians who have given him their ears, their trust, as he narrates another Saturday night of the fastest game on ice.

It’s a testament to Cole that, in person, he almost seems like someone doing an impression of that man from all of those broadcasts. He is genuinely, literally that man. Like when he describes last season’s Los Angeles-Chicago series — which he called most of, including the intense, dramatic Games 6 and 7 — with the amazement and almost speechlessness of someone who hadn’t worked a hundred playoff series before it.

“I mean, LA was one thing, Chicago was another,” he said. “It just happens, it’s exciting, it’s great hockey. I feel it. That’s why it’s the best game. There can’t be a better game than hockey when it’s played at the highest level.”

Cole is from St. John’s, Newfoundland, a town so far east on the coast of the Atlantic Ocean that it is closer to London than it is to Edmonton. Though the province only recently produced its first Stanley Cup-winning player (Detroit’s Dan Cleary) Cole puts it as just as hockey mad as the rest of his country.

“Any one part of the world is different than another part in some way, but we’re hockey too, don’t worry. We grew up in December waiting for the lake to freeze over. Our connection with the National Hockey League was first with radio, Foster Hewitt, and that surely was exciting. I couldn’t wait for Saturdays.”

Cole continues a legacy that goes from Hewitt, the first man to broadcast a hockey game, and Danny Gallivan, one of the first stars of television announcing. Those men both had different, distinct styles, but there’s one aspect of their work he feels he sort of continues on: a desire to let the game be the game.

“I hope I’m looked on as somebody who’s not in the way of the game, but let the game evolve and let the game happen and help it by the sound you use to do the game. If you can flow with the game and don’t overdo it — sometimes the game is not always exciting from start to finish — but seize those opportunities and bring the game right to the living room. Make them feel like they’re excited too. I think that’s what hockey broadcasting should be. Just let the game happen, and let me try to make you feel comfortable and excited at home, or wherever you might be. That’s my job, hopefully I can do it… I keep trying.”

Then again, he was thrown into an experience that would make any broadcaster envious when he began. The first game he was ever assigned to on radio was a Canadiens-Bruins semifinal, double overtime, and Jean Beliveau scores the winning goal. “It turned out, it was the only overtime goal he ever scored in his career,” he says. “And it was something very dear to me because it was my first game.” Beliveau was one of the greatest Canadiens ever, winning 10 Stanley Cups. You’d think someone might develop a huge standard, but no, he comes at every game with those butterflies.

“I’m still goin’, and still doing some overtimes every year.” Last year, he found he’d done his 40th Game 7. “That’s quite a lot of butterflies,” he jokes.

Oddly enough, Cole may never have had more butterflies for any hockey game than he had once at a Frank Sinatra concert one night in Montreal. Cole, who is a known fanatic of Ol’ Blue Eyes (he’s had a cab driver take him past his house in Hoboken during work trips to New Jersey), recalls it like… well, can you imagine Bob Cole as a nervous fan?

“I nearly met him, I came so close. He was doing a traveling show and I was lucky enough to go to the old Montreal Forum to see him. I was sitting in the aisle on the ice surface — it was safe, boarded, of course – and the building was full. He was great.”

“He stopped in my aisle, my row as he was leaving when the show was done. He stopped right there. A lady, two people in from me reached out and he shook her hand. Then the lady next to me reached her hand out and he shook her hand. And he looked at me, and I just froze. I didn’t even say anything, it was terrible! I gotta live with that one, but he was right there. And I didn’t say ‘nice goin’, Frank’… I just blew it. I blew it [laughs].”

Cole became the lead voice in 1980, which means he had a front row seat to the greatest star hockey has ever produced in Wayne Gretzky. But, very much like a Canadian, he reminds you that The Great One had some pretty good ones behind him.

“Don’t forget, he had Messier and Coffey and Kevin Lowe and Grant Fuhr,” before letting on. “They were great, great times. When they stopped the Islanders from obtaining their fifth, Edmonton took over and it was a fantastic era, and Wayne was of course, the captain and the leader.”

“He was the best,” he admits. “He would lift a team and lift a series, and he was outstanding. We’ve got a lot of great hockey players now, too, and a few in his time, but he seemed to stand out all the time, when the chips were down… here he comes! It was so exciting. That was hockey, really, at its best.”

Now Cole’s role is somewhat limited. No one knows yet if Rogers will have him call the one conference final he had for the past half-decade for CBC, who replaced him with Jim Hughson on the Stanley Cup Final broadcast in 2009. That said, Cole’s not really much for ending his career on his terms, as long as they’ll continue to have him.

“No,” he answers plainly when asking if he imagines retiring or signing off. “I’m sure that the powers that be are always talking about — maybe not always but I’m sure it occurred to them — but as long as I feel I can enjoy what I do and the fan enjoys the game, I don’t think about retiring. I’m sure some day I will, but the good lord has been pretty nice to me, so far.”

No, Bob Cole won’t retire, at least if he has his druthers, and if you talk to him like I did, you know that every feeling the man has toward the game is genuine. Though he doesn’t like a rule here or there (he’d put the red line back into the game to limit two-line passes, and maybe make the rink bigger, though not to the international size) he still loves it, and he still sees every Saturday night as a gift.

“I think it’s still special. It’ll never be like it used to be, where you’re starving for the next seven days, waiting for the next game. Now you can pretty well get a game every night, which is good for hockey fans, I hope. I’m just delighted and lucky to be a part of it.”