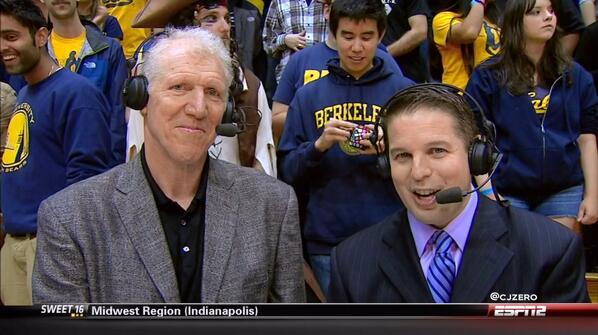 On Monday, Bill Walton was assigned to the National Invitation Tournament second round game between Arkansas and Cal for ESPN2. Given the nature of the NIT, Walton is a bit looser than normal with his commentary. And given the fact that Cal-Arkansas was a double digit game for most of the contest, it allowed Bill to explore the space within his own mind.

Roxy Bernstein was the play-by-play man and he did his best to keep up with Bill.

Unless where noted, the quotes come from Big Red.

(On Cal’s David Kravish getting kicked in the groin)
Oh he got kicked! Ouch! Ow! That hurts from here!

(On whether Arkansas can stay in the game after a bad first half)
Can anything happen on a positive sense here for the Razorbacks who have come this far on their charter plane. Can they make a shot or get a rebound and get back in this game?

(Trying to encourage Arkansas)
Keep playing your style, especially when it’s such a delicious style!

(Ricky Kreklow gets elbowed and gets bloodied causing the referees to check ESPN’s monitors)
Bernstein: We must have better monitors than the scorer’s table does.
Walton: I’ve got a great monitor here. I also got a great partner sitting right next to me here, Roxy. Thanks for your patience!

(More encouragement to Arkansas)
Playing on the road. That’s the mark of a champion. And that’s what (Arkansas coach) Mike Anderson has to get these guys to be able to do…

(Bill’s reaction to the Cal crowd)
This crowd here is having the time of their lives here at Haas Pavilion!

(After Arkansas calls a time out)
Ricky Kreklow putting on a show here tonight. The junior from Missouri, just up the way from Fayetteville. He sets the offense for the Bears sending back one more time. Kreklow with a kick ahead and Bird able to throw one down wide open. The Hogs. Oh my goodness! A little sloppy!

(After Roxy Bernstein reads a promo for the NCAA Hockey Championships)
Walton: So this Frozen Four… is that some sort of drink that you have on a spring break or what is this?
Roxy Bernstein: It probably is somewhere. But that’s actually the Frozen Four, but it’s for ice hockey.
Walton: Ice hockey?
Bernstein: I know you’re big into cycling, Bill, but when was the last time you were on ice skates?
Walton: It’s been more than a couple of days. Wayne Gretzky, that guy he could skate.
Bernstein: That’s why he was called “The Great One” …
Walton: He could think too. He saw things before anybody else did. Saw things before they happened. That’s the way that Ricky Kreklow has played here tonight …

(After a shot of the Berkeley campus)
Bernstein: Nobody had a better experience than you did by going to UCLA, I would have to imagine you would have fit in perfectly here at Berkeley back in the day.
Walton: I told Coach Wooden after I figured it out at UCLA, I told Coach Wooden that I wanted to go to UCLA in the fall and winter quarters when the basketball season was and I would spend my spring quarter here at Berkeley and he sat there and I explained this to him and laid it all out and he looked at me and he looked me and he said, “no, you’re not.”

(After an SEC Network promo)
Bernstein: Your buddy, Brent Musburger, the lead play-by-play voice for football on the new SEC Network.
Walton: I love Brent Musburger. I’ve known Brent Musburger for 40 years. I would watch him, listen to him announce a tree growing, a redwood tree sprouting a new branch on the fall on the California coast.
Bernstein: What he started with “You’re looking live…”
Walton: Excuse me?
Bernstein: What Brent started with, “You’re looking live…”
Walton: I don’t know that show. No …
Bernstein: No, that’s what Brent .. that was his signature hallmark phrase.
Walton: Really? No, I …
Bernstein: You don’t remember that?
Walton: No, I don’t know that.
Bernstein: Yeah, that was his signature call…

(On avoiding a foul)
Throw it ahead now! Don’t wait until the double team gets to you, please! Happiness begins when selfishness ends!

(As the game ends)
Walton: Thank you, for a real good time!
Roxy: It was fun, Bill!
Walton: A great night of basketball here in Berkeley, the epicenter of the world…

(Promoting the next matchup, SMU at Cal)
SMU-Cal Berkeley. Miss that at your peril! What Larry Brown and Mike Montgomery will deliver to all of us as basketball fans and fans of humanity, that will be a thing to remember forever.

The man is a true classic. With one more game being played at Haas Pavilion before the semifinals, here’s hoping that Walton gets one final TV assignment for ESPN before he heads to the Final Four for WestwoodOne Sports.