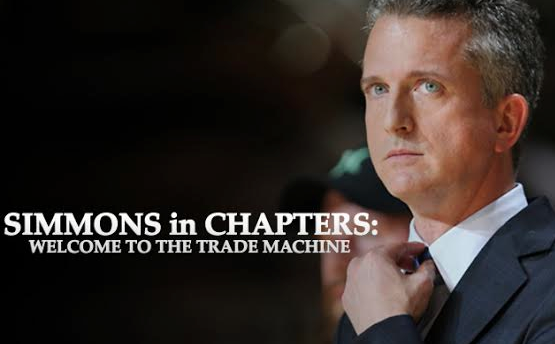 While Simmons’ history with ESPN has had plenty of ups and downs over the years, the general theme from 2001-2013 was one of his ascension in importance at the network. He first started writing for ESPN.com in 2001, came on board full-time a year later as a dot-com columnist, had his columns from 1999-2004 turned into an ESPN-published book in 2006, expanded his brand to podcasts in 2007, helped get the 30 for 30 documentaries off the ground (and played an important role in their ongoing development) in 2009, got his contract renewed and launched Grantland in 2011, and gained a regular TV role on NBA Countdown in 2012. There were rough patches along the way, but Simmons generally continued to become a more notable media figure in general and a bigger and bigger part of ESPN’s operations in particular.

2014 has been different, though. While Simmons has still found some notable successes (particularly with Grantland’s continued growth and work on the next wave of 30 for 30 films), he’s also seen setbacks. While his overall importance and influence in the sports media world hasn’t dropped (and has in fact perhaps risen), his relationship with ESPN has gotten rocky enough that his suspension over criticizing Goodell (and daring his bosses to come at him for it) has been seen as a potential tipping point that could lead to him leaving the network.

This chapter isn’t The Decline And Fall Of Bill Simmons by any stretch, as it seems apparent that Simmons will be an influential media figure for years to come. The debate is more if those future years are going to be inside ESPN, or if the self-proclaimed “Picasso of the Trade Machine” is eager to take his talents elsewhere.

One of the most fascinating developments of 2014 saw Simmons leave his prominent role on NBA Countdown for a new Grantland Basketball Show. Some will argue that’s a demotion; Simmons will no longer be a face of ESPN’s regular NBA pre- and post-game coverage. Some will say it’s a promotion, as he now gets a show that’s much more focused on him and his efforts, rather than one that includes him as just one voice. Regardless of the stance there, it seems like a smart move for both him and the network.

While Simmons’ Countdown stint had great potential, especially considering that he wasn’t your typical ex-jock analyst, it proved to be an awkward relationship in many respects. He sometimes clashed with other analysts on air, was rumoured to be the prime mover behind Magic Johnson’s exit and Michael Wilbon’s lessened presence just ahead of the 2013 season (although he fervently denied that), and even got into a feud with Clippers’ coach Doc Rivers.

His on-air complaints about his own airtime (and Sage Steele’s head-shaking reaction) on a postgame show during the NBA Finals in June 2014 were particularly indicative that the Simmons-Countdown era was on the rocks, and August saw the announcement that he was headed to his own show. It was a rare uncomfortable moment that broke the fourth wall and gave a window into the dissension on set.

That departure probably caused some relief for both Simmons and ESPN leadership. He got a show centred on him and his thoughts (which has been a successful recipe for his columns and podcasts), and they eliminated the most visible tensions on Countdown. However, the way the Countdown drama played out may have exacerbated some of Simmons’ previously-expressed frustrations with the company, and may have led towards him publicly daring Bristol to suspend him.

That element of the suspension saga shouldn’t be understated. Jim Miller said on the AA podcast that Simmons’ three-week suspension (two unpaid weeks, one paid week) was two weeks for insubordination and one week for calling Goodell a liar. That makes sense given both the oft-discussed ESPN desire to prevent any individual talent from getting too powerful and their lack of suspensions for other hard-hitting commentary on Goodell, such as what Keith Olbermann’s been doing (which he told Richard Deitsch has been approved by Bristol with very few changes).

Simmons’ comments on Goodell were incendiary, certainly, and perhaps problematic at an NFL rightsholder (something that’s come up before with ESPN). They might have led to a suspension even without his public challenge to his bosses to go after him. It seems highly probable that the dare to management may have been viewed as more troubling inside Bristol than any of Simmons’ comments on Goodell, though, and ESPN ombudsman Robert Lipsyte’s comments on the suspension seem to endorse that view:

In Simmons’ case, the “dare” was widely interpreted as a challenge to ESPN President John Skipper, who just happens to be Simmons’ most important booster at the company. When asked, Simmons refused to comment on whether it was directed at Skipper.

But Skipper certainly thought it was, and that insubordination was one of the main two reasons for the severity of the suspension. Particularly on podcasts, Skipper said, Simmons has a tendency to slip back into his “bad boy, let’s-go-to-Vegas” persona. Simmons, Skipper believes, is transitioning into an important influence and mentor at Grantland and needs to leave his well-worn punkishness behind.

Lipsyte goes on to write that “The more important reason for the suspension, Skipper said, had to do with fairness and the difference between commentary and reporting,” so take that for what it’s worth. However, the challenge to ESPN management certainly did not go unnoticed inside Bristol, and for them to cite it publicly as a reason for his suspension indicates it was taken very seriously indeed.

One theory floating around is that this was an intentional move from Simmons, a way to boost his public support and profile and an attempt to gauge other companies’ interest in him ahead of his potentially-pending free agency. That might make it the sports media equivalent of Carmelo Anthony or Dwight Howard publicly lobbying for trades to specific cities while still under contract. There’s some logic here; it would be hard to find a less popular public sports figure right now to align yourself against than Roger Goodell, and ESPN’s suspension inconsistency has brought them lots of criticism. This started a massive #FreeSimmons movement and a bombardment of e-mails to Lipsyte in support of him, and it’s made Simmons even more of a conversation topic than normal (and a much less polarizing and more universally-backed presence than normal). Keep in mind that Simmons is a huge wrestling fan; if anyone’s going to try a public face turn ahead of free agency, it might as well be him.

What are the chances Simmons winds up elsewhere? Miller, the co-author of ESPN history Those Guys Have All The Fun and a regular contributor to The New York Times, typically has his finger on the pulse of Bristol, and his comments on the AA podcast on Simmons are instructive. In particular, Miller says (6:23) that on the ESPN side, president John Skipper won’t pose a problem in patching up the company’s relationship with Simmons, but some of those under him might:

“John Skipper’s DNA is such, he is the least Nixonian person. There are many people who have kind of gone out of the ESPN orbit who have been brought back in. He believes in mending fences. Keith Olbermann returned to ESPN on Skipper’s watch. Skipper doesn’t hold grudges, he doesn’t believe in that kind of psychology, so I believe there’s a great opportunity for Bill Simmons and John Skipper to continue. That’s not the problem. The problem is the layers underneath Skipper, where I do think that there is some tension that exists between Simmons and, you know, others at the network. Again, it comes down to this issue of power, and people who think that Simmons is trying to be more important than the network.”

Miller goes on to say (10:22) that an interesting Simmons possibility apart from the idea of him jumping to a competitor like Turner could be him starting his own site, and perhaps taking Grantland writers with him:

“The nature of technology and the media landscape today is that you don’t need to have a big place behind you. He could create his own ecosystem that has, you know, a web presence, podcasts, anything he would want to do and he doesn’t have to be tied to a network. That’s totally true. He could also go and create his own version of Grantland.

My understanding, by the way, is that if Bill Simmons leaves ESPN, Grantland stays at ESPN, but the whole thing is… you’ve got to think about something: Grantland is just a word. The people who work for Grantland and the relationships that they have and the reasons people write for them, work for them, whatever, is probably inextricably linked with Bill and his team.

The bigger question isn’t whether the word Grantland would stay with ESPN. The bigger question is could Simmons, if he left, basically take the Grantland staff with him and call it something else? If I’m in Vegas, I would be betting that he’d be able to do that if he decided to leave, because I think a lot of people who work there would basically walk through fire for him. It might be a Pyrrhic victory for Bristol in the sense that they get to keep Grantland, but how many people would actually stay?”

With Simmons’ contract up next year, his return from suspension today begins the most pivotal time in his tenure at ESPN. While many believe he’ll be able to repair relationships and stay with Bristol, the lengthy three-week suspension represents a time of great volatility. The platform and reach the worldwide leader in sports offers Simmons could not be found elsewhere and leaving that behind would be a significant risk. However, Simmons is one of the few people with the personality and the profile to take that risk. As the New York Times lays out, Simmons could follow the personal brand path of others like Glenn Beck who have left network jobs to start their own ventures.

It’s clear that while Simmons’ internal popularity at ESPN may have taken a hit following this suspension saga, his external popularity remains huge. With his success as a columnist, podcaster, documentary producer, website editor-in-chief and even (to a degree) TV analyst, there are plenty of options out there for him, from sticking with ESPN to joining an established competitor to starting his own operation (perhaps with some substantial venture capital funding). Thus, regardless of what happens from here on out, The Sports Guy is likely to be a prominent figure on the sports media landscape going forward. The question’s just who he’ll be that prominent figure for.