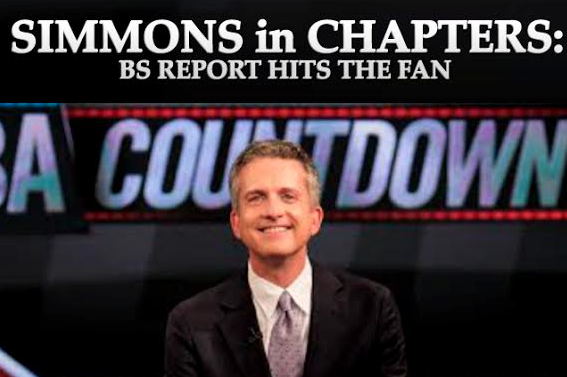 In 2014, Bill Simmons’ The B.S. Report may not seem all that remarkable. Sure, it’s a hugely-popular podcast, but there are all sorts of podcasts out there today with sports personalities giving opinions and interviewing notable figures and friends, and tons of those podcasts are under the ESPN umbrella. When The B.S. Report first launched in 2007, though, it was a relatively bold leap.  The podcast also helped to create and develop some of the tensions that have been building in his relationship with the company. The B.S. Report is an important part of Simmons’ story overall, and it continues to be a key part of his work, but it’s especially essential in understanding how things changed for him from 2007 to 2009.

2007 was only a few years after “podcast” itself was coined as a term and the idea of on-demand radio started to take off. While Simmons’ podcast wasn’t the first sports one out there (or the first ESPN one; the company started podcasting in 2005), his became one of the first really-high profile sports entries into the podcasting arena. Perhaps even more notably, the podcast represented Simmons’ first real venture into other platforms than his ESPN.com columns, and as such, it was a big part of his transformation from an online-only writer into a central figure at the network.

It’s interesting to explore how Simmons got into podcasting. ESPN entered the arena in 2005, but he started The B.S. Report in 2007 as a result of approaching his bosses, according to this 2009 piece from John Ourand of The Sports Business Journal:

Simmons creates three or four new podcasts per week, and says they help him interact with his readers and listeners in a new way.

But that was not the reason why Simmons first approached his ESPN bosses in the spring of 2007 about producing his own podcasts. ESPN began podcasting in the summer of 2005, and Simmons said he was intrigued by the medium.

“I thought it would give me some reps, and help me get rid of vocal tics if I ever wanted to do anything down the road with TV and radio,” he said. “It would keep my options open.”

It didn’t take long for ESPN to agree, and they quickly outfitted Simmons with “a weird machine, two headphones, [and] an ISDN line in my house.” …

Simmons’ podcasts defy traditional rules. Told to keep his podcasts under 20 minutes, Simmons regularly talks for about an hour. Told to break his podcasts into segments, Simmons generally carries one theme throughout.

He calls podcasting “radio on demand,” and says it has several advantages over traditional radio. “By the time radio guests are getting warmed up, the segment’s over. With this, you’re really having a conversation with somebody,” he said.

Breaking those traditional ideas was key to Simmons’ success, and it’s notable that podcasting in general has evolved much more in the direction he favoured than the one his bosses advocated way back then. However, ESPN was a big help in the rise of Simmons’ podcast too. In fact, his relationship with ESPN has played a vital role in his overall success across a wide range of media arenas, from writing to podcasting to documentaries to running a website to TV. Tons of people have thought of making sports documentaries, or of launching a sports website, but it’s a lot easier to see that turn into end products of the calibre of 30 for 30 or Grantland when you have the self-proclaimed Worldwide Leader In Sports and its vast resources behind you.

Similarly, the early history of The B.S. Report is far different from most podcasts’ path of starting small, gaining credibility and eventually landing distinguished guests. Simmons kicked things off with ESPN basketball writer Marc Stein, had Adam Carolla and Paul Shirley follow him, and did a podcast with NBA commissioner David Stern in just his second month of podcasting. Names like that certainly helped attract an audience, as did the promotion of The B.S. Report on ESPN’s site.

At the same time, Simmons’ efforts turned out to be the anchor of a key new area for the company. In May 2009, ESPN’s podcasts saw 9.6 million downloads, with The B.S. Report listed as their most popular, and it pulled in 10.7 million downloads in the first six months of that year. The advertising revenues and corporate sponsorships weren’t huge, but ESPN’s Traug Keller (senior vice president of production, business divisions) told Sports Business Journal that podcasts were a desirable venture to attract a young audience that wasn’t listening to traditional radio and expose them to ESPN talent. Simmons was the leader on that front, and thus, in theory, it should have made him and Bristol even more closely entangled.

In practice, though, podcasting created tensions. Simmons was already battling with editors over the content of his column, and that perhaps became even more difficult with podcasts, where a problematic reference couldn’t just be stricken. That led to the disclaimer at the start of each episode that the podcast “is a free-flowing conversation that occasionally touches on mature subjects.” Even that didn’t solve everything, though; in Those Guys Have All The Fun, Simmons discusses the trouble he got into for saying people perceive soccer as gay, and how Super Dave Osborne made a joke on his podcast that was cut, but was allowed on Conan O’Brien’s 11:30 NBC show.

Perhaps most importantly, ESPN vetoed a podcast where he’d scheduled Barack Obama (then campaigning for the 2008 Democratic nomination) to talk sports. That created a massive backlash, and it led to Simmons railing against the network’s anti-politics stance over that and a nixed Sarah Palin reference in Those Guys:

“So at some point—as I made the case passionately and repeatedly—are we not reflecting what real life is like? Everyone I know is talking about Sarah Palin’s speech and I’m not even allowed to breathe a mention of that in my column? What kind of alternate universe are we trying to create here?”

One area where Simmons did get away with more was 2009’s The Book Of Basketball, which marked both his first original book (not a collection of columns) and another chance for him to test ESPN’s limits. As he says in Those Guys, he thought it was unusual the company didn’t clamp down on his book’s coarse content more given how they tried to censor his podcast.

The Book of Basketball only added to Simmons’ increasing notoriety as it became a #1 New York Times bestseller.

As 2009 came to a close, Simmons’ star was still rising. He’d become not just a key online presence for ESPN, but the unquestioned star of Page 2, the company’s most valuable podcaster (and one of their most valuable voices overall, especially at reaching younger readers and listeners) and a best-selling author. Bristol had given him tremendous resources, connections, and exposure, and he’d repaid them by delivering an incredible audience, notable for its size, its demographics and its passion for his work.

More was to come, with Simmons continuing to find new ways to make ESPN a leader in all forms of media. However, the relationship between him and his employer was starting to hit more rocky patches, and some of the issues exposed in this period would turn up again and again later on. In particular, The B.S. Report saw Simmons push some limits he hadn’t really before, and then get upset when the company censored him. There were even greater days ahead for Simmons’ role at ESPN, but also even more significant feuds. We’ll cover that and more in Chapter III.