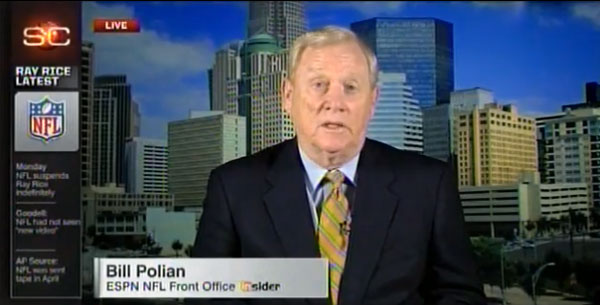 This is enough to cause you to wonder just how disturbingly powerful the NFL is.

At 10:47 a.m. Thursday, ESPN had current analyst and former executive and league office employee Bill Polian on to discuss the controversy regarding whether or not the NFL saw a tape of Ray Rice knocking out his wife.

Chris McKendry’s question: “Could you just imagine a tape arriving at the office and people not seeing it who need to see it?”

It is very puzzling to me. As a matter of fact, I worked as a vice president in the NFL office in 1993, with respect to football operations. I know how the office works, I’ve physically been there—it was a different building, not the one they’re in now—but it’s very difficult for me to understand how that could happen. Especially when you’re in a situation that is as high-profile as that particular incident is. It’s puzzling, and I have as many questions as everyone else. It’s outside my area of expertise. For all the years that I was in the NFL, NFL security, and the NFL’s ability to protect its integrity, the so-called “protection of the shield,” was unmatched in American business. Forget about sports—in American business. I mean, you did not step out of line in the NFL, and if you did, there was an unwritten rule that when you were called into the office—and met with someone who was the commissioner or there at the behest of the commissioner—that you better come clean, that you better tell the truth, the whole truth, and nothing but the truth. And if you work in the office, you better be on top of the details. The office was there to make sure that the clubs, the players, the reputation of the NFL reamined unsullied. That goes back to the 1960’s with the administration of Pete Rozelle. So this is totally, totally out of character for what I know of the NFL office.

Soon after that, the segment ended abruptly. Might have been for technical reasons, but it is weird that Polian rejoined McKendry only 21 minutes later, fielding the exact same question but with a completely different answer:

Well it can happen. It’s a very large organization, much larger than when I served in the league office, maybe much larger by a factor of 10. When you have a large, bureaucratic organization, which that is, and there are some that think it is too large, very honestly. Things can slip through the cracks. Someone can make a value judgement who has no right to make that judgement. The CEO, who is in effect Roger Goodell, doesn’t get all the information he needs all the time. That’s a fact of life in bureaucracies. In this case, we’ll find out what happened, and they’ll absolutely, they being the NFL and Roger, will have to take steps to make sure it never happens again.

Wait, what? I don’t understand how the league office went from a micro-managed, carefully controlled compound to a willy-nilly bureaucracy in less than half an hour.

Conspiracy theorists will of course claim that someone from the NFL didn’t like Polian’s answer and urged him to reconsider in a fresh segment. But there’s a chance Polian simply thought twice about his answer and deemed it to be either too strong or complete BS. And that would be just fine, except this wasn’t the correct way to right that wrong. If Polian truly didn’t feel his first answer was fair to the league, he should have been transparent about it in a follow-up segment, admitting that he was walking his feeling back slightly (or more than slightly). By trying to mask his earlier take with a new one, he only invited questions about his credibility as an independent NFL analyst.

Or the NFL got to him. In which case, we have a larger problem on our hands.