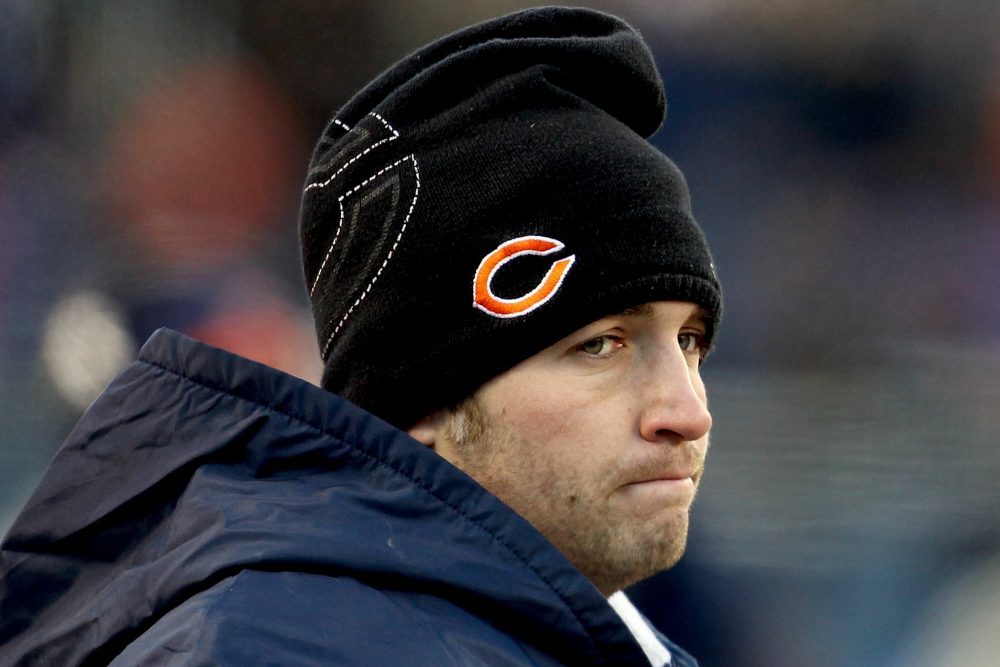 The Chicago Bears are apparently doing all they can to surpass the Washington Redskins as the most dysfunctional franchise in the NFL.  Because in all my years of being a football fan, I’ve never seen a coach admit to being a source for a story bashing his own quarterback.  But that’s what Bears offensive coordinator Aaron Kromer reportedly admitted to his team this week.

Last Sunday, NFL Network’s Ian Rapoport reported that the Bears were exhibiting “a serious case of buyer’s remorse” after giving Jay Cutler a massive contract to entrench him as their franchise quarterback.  Cutler has responded with his typical roller coaster season: he’s in the top ten in the league in passing yards, completion percentage and TDs, but also second in the league in INTs and 16th in QB rating.

Rapoport also reported that Cutler was almost benched in a game against the Bucs a few weeks ago and that his play, specifically checks at the line of scrimmage, was hurting the team.

These reports happen all the time in the NFL, but rarely do we find out who the source is.  But Brad Biggs at the Chicago Tribune reports that Kromer came clean to his team and his quarterback that he criticized Cutler to Rapoport.  Kromer reportedly apologized in a team meeting for throwing Cutler under the bus, and the quarterback apparently responded in the most Jay Cutler way possible:

The offense learned that Monday in a meeting room at Halas Hall when offensive coordinator Aaron Kromer made an emotional and tearful apology for criticizing the quarterback in a private conversation at Soldier Field with an NFL Network reporter last week.

Four sources told the Tribune that Kromer adamantly denied he said anything about the franchise having buyer’s remorse for Cutler’s blockbuster contract and assured players that portion of Sunday’s report on NFL Network did not come from him. With Cutler in the room, Kromer did admit however to being frustrated with the quarterback’s play management and expressing that to Ian Rapoport as he left Soldier Field on Dec. 4 after the fifth loss in seven games.

Cutler shook his head during Kromer’s apology, one source said.

What.  A.   Disaster.  At least in Washington, Jay Gruden makes his distaste for Robert Griffin III known to the media and to the entire world.

It’s somewhat amazing that NFL franchises treat even the most meaningless information as though they’re secrets the NSA would be after.  And yet, when it comes to anonymous sources in the media, NFL personnel become gossiping middle schoolers.  And if Kromer’s tearful mea culpa is to be believed, he’s not the only leak inside the team.

This kind of subterfuge from Kromer, especially now that he revealed it to the team and its public knowledge, presents what sounds like an irrevocable fracture in that relationship.

It might not matter anyways – after two very disappointing seasons, the Marc Trestman era may be coming to an end after this season.  And who knows if Cutler will be around at this point, either.

In spite of all the ups and downs, Cutler is by far the best quarterback the Bears have had in decades.  And you almost have to feel for Cutler in this instance.  For his own offensive coordinator to diss him to the media behind his back is rather unbelievable.  Not even Rex Grossman had to go through this.