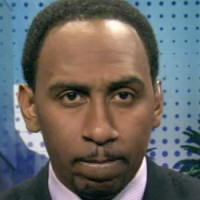 One of the ways in which Skip Bayless and Stephen A. Smith destroy the integrity of the ESPN brand and the sanctity of sports journalism all at once is their antagonism towards athletes.  The carnival barkers that pollute ESPN2’s morning airwaves continually bait athletes and make up insulting nicknames like “Bosh Spice” that are straight from the 3rd grade playbook.  It’s happening now with the biggest takeaway from First Take from these NBA Playoffs being Skip Bayless ripping Kevin Durant for… being very good at basketball.

Why would ESPN, the self-proclaimed worldwide leader in sports, crawl down into the gutter and give a platform to pundits who do nothing but take personal shots at the athletes the network covers?  What kind of person derives pleasure from seeing what clever nickname they can create to trash an athlete?  It’s sad and nonsensical at the same time.

Warriors center Andrew Bogut has finally had enough of Stephen A. Smith’s games.  Smith has called him “Andrew Bogus” (so so clever) and the “tin man.” The Aussie center has battled injuries the past two seasons in Golden State and missed the first round series against the Clippers.

ESPN's Stephen A. Smith on Andrew Bogut: "He can certainly defend but behind his back he is called the Tin Man for a reason. No heart."

Stephen A. Smith: Ws "devoid of big man presence b/c Andrew Bogut continuously resembled Andrew Bogus as somebody who's a complete no-show."

Although at first Bogut tried to deflect Smith’s barbs with humor, now he’s seen the light and cut straight to the heart of the matter.  Appearing on the Australian basketball podcast Downtown, Bogut had this to say about Stephen A. Smith:

“He is just a wanker, pretty much.”

Perfect.  Just perfect.  I also love how the Sydney Morning Herald describes Smith, safely out of earshot of his daily screamfest with Skip Bayless:

The loudly spoken journalist, who stars on ESPN’s morning talk show First Take, is a divisive figure in US sports who often takes unpopular positions on sport and social issues while also calling out major athletes.

That pretty much sums it up.  Australia just has all the luck, don’t they – a beautiful continent, great people, a terrific sports culture, and they exist an entire ocean away from Stephen A. Smith and Skip Bayless.  All the luck.