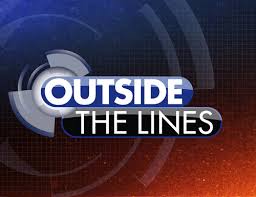 It may be August, but it hasn’t been a dead period for ESPN’s critically acclaimed and multiple award-winning Outside the Lines. The program has been busy breaking news including an investigation into Title IX violations regarding sexual assaults at multiple universities, a special co-produced with “Olbermann” and hosted by Keith Olbermann on the 25th anniversary of Pete Rose’s banishment from baseball and this weekend, a profile of Dallas Cowboys owner and General Manager Jerry Jones that is making news, and published on ESPN.com and will air on television this weekend.

It’s all about expanding the Outside the Lines brand and not waiting to air a story until the show airs on television. ESPN has given Outside the Lines its own microsite and provided space for OTL stories in its magazine as well as airing on television whether its the daily program (now at 5:30 p.m. ET on ESPN2) or the weekly Sunday show that is currently on ESPN at 9 a.m. ET, but will be moving to 8 a.m. on ESPN2 once football season starts to make way for Colin Cowherd.

Awful Announcing spoke separately with two OTL staffers, Dwayne Bray, a Senior Coordinating Producer, and Chris Buckle, deputy editor for investigations for ESPN digital and print about the show’s recent stories and how it copes with being moved around by the network bosses.

Awful Announcing: Outside the Lines is a program that takes the time to delve into stories whether they be Pete Rose or the University of Missouri or other investigations. What is it about ESPN that allows OTL to do these stories and not rush these to air or print?

Dwayne Bray: Well ESPN is a large company and we get a lot of media publicity and/or criticism for a lot of stuff we do. We do highlights, we do discussion shows, we do all sorts of things. But journalism is a very, very strong part of our DNA here and I just have to say I know a lot of people go around thanking their bosses, but I was in newspapers for almost two decades before I came here and have never seen a greater commitment to investigative journalism anywhere whether it’s sports, news, business news, it doesn’t make a difference.

I have a staff of twenty investigative producers and reporters. There are another half-dozen of those types of folks on our print and digital platforms, so when you really look at it, we’re talking nearly thirty people dedicated to doing this type of work, day in and day out.

That really gives us the time to really delve into these issues with the care that needs to be taken. On this particular Missouri story, the one with Derek Washington, we’ve filed literally hundreds of requests for public records. We have two particular alleged victims in this story and their student records are private. Our producer Nicole Noren and reporter Paula Lavigne were able to go to those victims, establish a relationship and get them to sign waivers so we could get their private student records. It takes time to do that. You can’t do that overnight or in a week or sometimes even in a month.

So I give a lot of credit to ESPN’s commitment to investigative journalism, enterprise journalism, longform journalism and I know people will say, “you work there, of course you’ll say this,” but I’ve worked at some of the finer media organizations in the country, the Los Angeles Times, the Dallas Morning News and the Dayton Daily News and they were all great places to work, but no one has had this type of commitment to investigative reporting.

AA: Pretty soon, the show will be moving from its customary 9 a.m. Sunday timeslot on ESPN to 8 a.m. on ESPN2 during football season. How has the staff been dealing with it and how to do you try to deal with it knowing you might have less of a viewership?

DB: I know there’s been some criticism of that. It’s not really my position to say where the show should be or that type of thing. That’s up to my bosses and the programming people, but I will say one of the things that I’ve tried to do since I’ve been in charge of the TV end of the investigative efforts for ESPN since about 2007, I’ve really tried to expand our brand beyond just a Sunday morning TV show.

We get so many users looking at our content on ESPN.com and ESPN the Magazine but also on television and SportsCenter.

I’m going to tell you about a few stories we’ve done this year that’s had close to about a million people watching or looking at it in some form or another that never even appeared on Outside the Lines Sunday morning.

The Rashard McCants story at North Carolina. We broke the Josh Gordon suspended story. We break those stories under the Outside the Lines brand on SportsCenter and frankly, when we can break a story on SportsCenter like the Derek Washington story or even on the SEC Network, to me, I’m happier doing that than having the story on Sunday morning at 9 o’clock or 9:30 whether it’s on ESPN or ESPN2. I want to break news. I want to get it out there and I want to get it out there as quickly as possible and I don’t want to be holding news until some timeslot on Sunday morning. I just think in this media environment you just can’t do that anymore.

AA: What can you tell us in regards to the sexual assault story on the Missouri campus that aired last weekend?

DB: It was a story about Derek Washington whose name is not unfamiliar to college football fans. He was the star running back at Missouri back when they were the number three team in the nation in 2010 and undefeated. He was a player who was headed to the NFL, no doubt about it. He had 19 touchdowns.

But he also had a past in which there was a sexual assault of a former tutor of his that he was accused of. He was actually convicted of that and sentenced to five years in prison and he served four months of that time.

What’s new about that OTL story is we find out before that alleged assault in 2010, there was another alleged assault in 2008 that no one in the public never even knew about. We just found out about it earlier this year after our producer Nicole Noren did a piece on a young lady named Sasha Menu Corey who was a swimmer at Missouri who had accused another football player of sexually assaulting her and eventually she had committed suicide. We did that story in January and then found out new details about the Derek Washington story.

This is really a story about inaction.

Chris Buckle: If you go back to the Sasha Menu Corey story, we were met with some resistance that we thought was a little bit out of line in terms of the public record laws and we challenged them to the best of our ability and we did not end up filing lawsuits. In many cases we got what we wanted whether it came from the university directly or through other sources.

AA: What can you tell us in regards to the Jerry Jones story that has come out on ESPN.com and will be seen on TV this weekend?

CB: This is another cross-platform effort and this one also involves the magazine. Don Van Natta, Jr. has spent a fair amount of time with Jerry Jones, the Dallas Cowboys owner profiling him for the last several months. There will be a package of stories that launches this week. There will be some news created out of that. You’ll see a magazine piece in the September 15th edition that will be out on September 5th.

We rolled out the longform piece on Thursday in conjunction with a TV piece that he also did for the OTL TV show. All of this will run under the Outside the Lines brand by the way.

We launched this Thursday digitally. The news will get play on SportsCenter and NFL Live. It will start making its way on various radio and TV platforms and it will get the machine rolling all the way through the Outside the Lines TV show on Sunday morning.

AA: What is it about Jerry Jones that makes him a compelling figure through all these years?

CB: As Don (Van Natta, Jr.) notes in his magazine story, he’s one of the most recognizable sports figures out there and one of the most controversial because not only of the team that he leads that still carries the “America’s Team” moniker, but also the way the he goes about it. He’s a tremendously successful businessman and owner. He’s very, very accessible to the public in Dallas and elsewhere and that provides some interest among fans. He’s out there in terms of interactions. He obviously is the General Manager and while he has some early success with the Super Bowls, while the team’s record on the football field has plateaued, the Cowboys presence has not.

We thought he was an interesting guy to look at because of the fact that it’s his 25th year in the NFL and we wanted to see what was behind Jerry the owner, the president and General Manager.

AA: Was it easy to gain Jones’ trust?

CB: The Cowboys told us they were unlikely to allow Jerry to speak with us at any length and as you’ll see in the pieces, we sent Don to the owner’s meetings in Atlanta with the hope Don would be able to run into Jerry in the hallway or a restaurant somewhere. I told him that “if you run into him, I know you’ll get him,” but it’s a matter of getting to him in person. We were fortunate that Don was able to and that’s exactly what happened. Once Don got to him face-to-face, it became a deal where we knew we were going to not only have the story, but what turned out to be really exceptional access.

The Outside the Lines profile of Jerry Jones will air this Sunday at 9 a.m. ET on ESPN with various re-airs throughout the day on ESPNews and ESPN2.