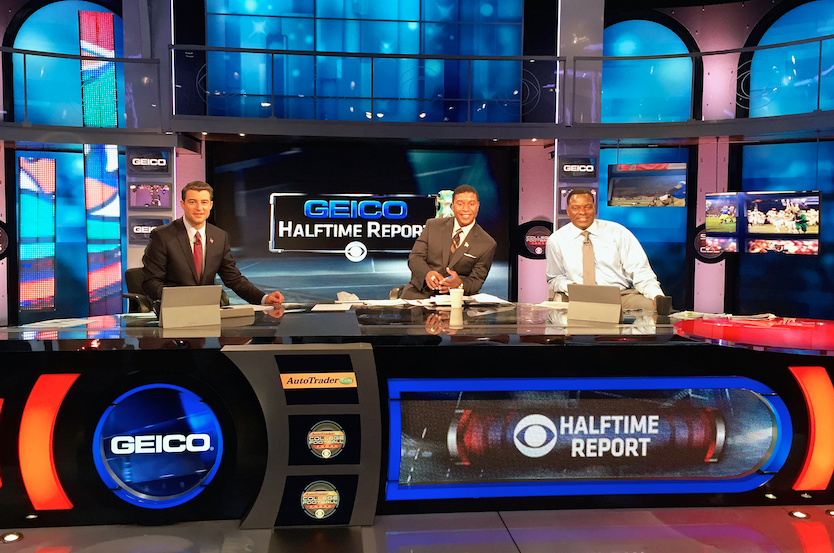 Adam Zucker has an enviable position, one he feels lucky to have.

The CBS host made the leap to full-time host of SEC on CBS’ pregame, halftime and postgame coverage this season, replacing the erstwhile Tim Brando and appearing on many fans’ screens for the first time. But while he seems brand new to many, he’s been doing this job for years.

“The best thing about my situation is that while it’s a new position, I wouldn’t call it a new job,” Zucker said. “It’s the same company and it’s a lot of the same people that I’ve worked with, some of whom for over a decade now. I’ve almost only had to worry about my performance, specifically.”

With the hosting vacancy looming, CBS had the option of poaching someone from another network or hiring a young, qualified, in-house talent. Zucker is a homegrown talent, if there’s such a thing, for CBS, someone who rose through its ranks after joining College Sports TV – which later became CBS Sports Network – in 2003.

“It was a very easy decision when the position opened up.” Bryant said. “We always look for the best candidate for the role. That person could be from within or outside, but Adam was the best fit. We already knew what we had in-house.”

Zucker ended up at CBS after a career in local sports TV in Syracuse – also his alma mater – and later in the Wilkes-Barre/Scranton market, covering college and professional sports. But Zucker isn’t all about football. He has a family, has attended more than 50 Phish concerts – once seeing the band every night for a week in college – and is an avid disc golfer, bringing his discs with him on road trips.

“I got done interviewing Nick Saban at SEC Media Days, got out of my suit, found a couple of interns and we played disc golf,” Zucker said. “When I’m told I’m going to the Final Four or the Super Bowl or a big game, one of the first things I do is see where the closest disc golf course is and see if it’s worth bringing my discs.”

And for those dozen or so readers who are the strange combination of an Awful Announcing fan, college football fan and disc golfer, you might recognize Zucker’s voice from the the DVD of the Disc Golf World Championships, an event he called every year until his CBS obligations conflicted. Though he let his Professional Disc Golf Association membership expire, he’s played more than 100 of the 3,000 American courses and is still facetiously pushing for CBS to air the world championships.

The Championships, among other responsibilities, finally conflicted because he took on too many jobs, which finally became a problem.

In 2013, Zucker spent a week in New Orleans for the Super Bowl on assignment, came back and dove back into college basketball. College football’s National Signing Day quickly followed then he returned back to basketball leading up to and through the Final Four. After the Final Four, he had six days to turn around for the network’s NFL Draft preview shows. He was apparently getting three hours of sleep a night, and was 50 pounds heavier than he is now. After weeks of this routine, he woke up the morning of the first NFL Draft preview show, got out of bed and crashed into the wall from exhaustion.

This obviously prompted a change of his routine, sleep habits and diet – following the advice he received from CBS reporter Tracy Wolfson. He lost the weight and was back to normal by the time this new job came calling.

“It added years to my life,” Zucker said. “And it came at a crucial time in my career, because low and behold, that chair opened up.”

Zucker prides himself on his preparation, calling it the most significant aspect of the job. He makes cards for every game the show will cover, color-coding them in terms of importance and kick time, editing them with a different color to highlight what needs to be said during a highlight or discussion.

The ratings for SEC on CBS games increased 24 percent in 2013, aided by multiple Johnny Manziel appearances and one of the best and most hyped college football games ever. The ratings were also fueled by competitive football, which has carried over to this season. The Alabama-Florida game on Sept. 20 drew a 5.1 rating, and even Saban notices the numbers.

Bryant and his CBS compatriots hope that continues this year and throughout the years remaining on the network’s SEC rights contract, with Zucker at the helm.

“In the next few years, I still see us having the best game in the best conference,” Bryant said. “I see the package just growing and getting stronger.”

As the ratings pile up, Zucker is there to retain viewers and keep the discussion going. He relishes his role as a television traffic cop and doesn’t aspire to a life in the play-by-play booth, being on the road every week. Instead of expressing his own opinion, Zucker would rather put it in the form of a question to his analysts, embracing the less-is-more stance as opposed to embracing debate. A host does have a place to opine about current events – James Brown’s statement on domestic violence on Thursday Night Football, for example – but ordinary discussions are not meant for a host to participate in the analysis.

“I almost want to be a conduit between the fan and the experts, for the experts to answer what’s on the fans’ minds or to support or even sway an opinion that a fan has,” Zucker said. “My role is more of the glue to bring it all together. It’s both better and easier for the analysts to worry about what they do. They are prepared with the how and why and I lay down the what.”

His preparation is his priority, but the majority of being successful in the TV business is being in the right place at the right time and having the talent to back it up.

Luckily for him, a spot opened up with the SEC on CBS pregame, halftime and postgame show, and he was ready, qualified and willing to fill it, doing all this while keeping his Phish-approved Birkenstocks at home.