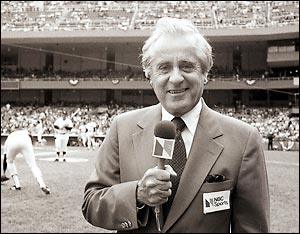 Trades among television networks are rare. When they happen, they make news. The most recent examples happened between ESPN and NBC and involved on-air talent.

In February 2006 before NBC returned to the NFL after 8 long years, the Peacock traded for Al Michaels from ESPN and its parent company Disney in exchange for an obscure cartoon character named Oswald the Rabbit. NBC’s parent company at the time, Universal owned the rights to Oswald which was created by Walt Disney and was the precursor for Mickey Mouse. In fact, looking at Oswald and Mickey, there’s not much difference except for the species. It allowed Michaels to join the crew that had been working on ABC’s Monday Night Football and would become NBC’s Sunday Night Football. Disney got Oswald and made him the main character in a video game and everyone was happy. ESPN also received rights to the first day of the Ryder Cup and expanded Olympic highlights on SportsCenter.

Then earlier this year, ESPN and NBC became trade partners again when the Peacock this time sent an unhappy Michelle Beadle back to the Worldwide Leader in exchange for those previously traded Ryder Cup rights and expanded English Premier League highlights for ESPN’s studio shows. The trade had actually been discussed a few months prior, but Beadle was the final piece of the trade. Once again, both sides got what they wanted and everyone was happy.

But network trades aren’t just a 21st Century phenomenon. Going into the Awful Announcing Wayback Machine, we’ll accompany Sherman and Mr. Peabody to 1979 when there were just three networks televising the NFL; ABC (Monday Night Football), CBS (NFC) and NBC (AFC). Cable was in its infancy. A little network called ESPN was about to begin.

NBC had decided to make a change in its lineup. Curt Gowdy had been its “A” announcer with John Brodie, however, the network felt he had lost a bit off his fastball. Executives wanted to bring in the younger Dick Enberg and Merlin Olsen make them their “A” team. And realizing it would look bad if the Peacock demoted the Gowdy to either its “B” or “C” team, it pulled off an amazing trade with CBS for Don Criqui.

As CBS had Pat Summerall and Tom Brookshier established as its “A” team and Vin Scully (Yes! Vin called the NFL) and George Allen as its “B” team, the only place for Gowdy was on its “C” team with Hank Stram. Sports Illustrated’s Dr. Z, the great Paul Zimmerman handicapped the 1979 NFL broadcasting lineup and this is what he wrote about the NFL on CBS:

Stram and the newly acquired Gowdy will operate as CBS’ No. 3 team. No. 2 is Vin Scully-George Allen, freed from last year’s three-men-in-the-booth experiment that didn’t work. Jim Brown (“Isn’t that so, coach?”) has been turned loose. The No. 1 team remains Pat Summerall and Tom Brookshier. Comfortable. Time-tested. No. 4, Lindsey Nelson-Paul Hornung, dropped a notch from its No. 3 slot of last season, and suffers from Hornung’s lack of homework. His one-liners just don’t do it. The fresh new face on CBS is John Madden, the former Oakland coach, who will serve as an analyst on a number of regional telecasts.

That’s right. John Madden was a rookie then and believe it or not, his first game albeit off the air was with a young Bob Costas who the following year would move to NBC.

Here’s an ad provided by the Classic TV Sports twitter account showing the NFL on CBS teams plus the NFL Today lineup of Brent Musburger, Irv Cross, Jayne Kennedy (replacing Phyllis George for a couple of seasons), Jack Whitaker and Jimmy “The Greek” Snyder. Notice that Madden is not in the ad. 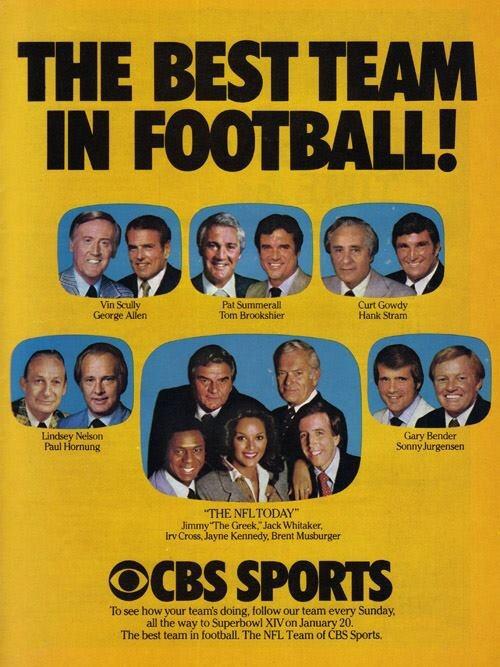 If you’re wondering about the NFL on NBC lineup, well, Dr. Z had this to say:

NBC leads off with the very solid twosome of Dick Enberg and Merlin Olsen. Olsen was obviously advised by the network to get away from the intensely analytical style of his rookie season in 1977 and became a more outgoing personality in ’78. Few color men work harder. I especially like two things about his approach: he doesn’t shoot for the cheap one-liners–“They hired me as a color man, not a comedian,” he says–and he tries to keep his between-plays comments fairly tight. I can’t handle the rambling monologues that are interrupted by the action on the field–“I’ll get back to my story right after this play.”

No. 2 for NBC is the new team of Jim Simpson and John Brodie, Charlie Jones and Len Dawson are No. 3, and for me they are a very easy listen, because they hark back to old AFL days–and so do I.

The fresh new team on NBC is the No. 4 unit of Criqui and Bob Trumpy. Trumpy, who steps up from last year’s No. 5 crew, is a comer whose flashes of insight often jolt you. For instance, when a TD was erased by an illegal pick in a Houston-Cincinnati game, Trumpy had this rare infraction nailed before the official’s flag hit the ground. And in the same game he provided this punchy capsule on the Bengals: “A very, very talented team; there’s just something haywire upstairs.”

The following year, Simpson would leave for ESPN, Criqui would join Brodie on the “B” team, Jones and Dawson would remain on the “C” team and Bob Costas would join NBC and call games with Trumpy.

And what about ABC? It had the legendary team of Frank Gifford, Howard Cosell and Don Meredith back, but Dandy Don wanted to cut back on his schedule so he worked only 10 games that season. Joining ABC for the other six was former Minnesota Vikings quarterback Fran Tarkenton. Interesting words on Francis that can still apply today:

He displayed a willingness to knock–mostly quarterbacks, from Ken Stabler down to Raider sub David Humm–and most of the time he did it with flair, e.g., “Too late, too high and too wide, which means incomplete.”

“I like the way Sir Francis talks–right on the line,” said Howard Cosell, beaming in the manner of a proud papa who parades a sleepy child out to recite Invictus to the dinner guests.

Dr. Z whose end-of-season NFL broadcasting grades were must reads, gave an accurate assessment of the 1979  broadcast teams. And chronicling a rare trade allows us to take a trip back in time and look at an interesting piece of broadcast television history.