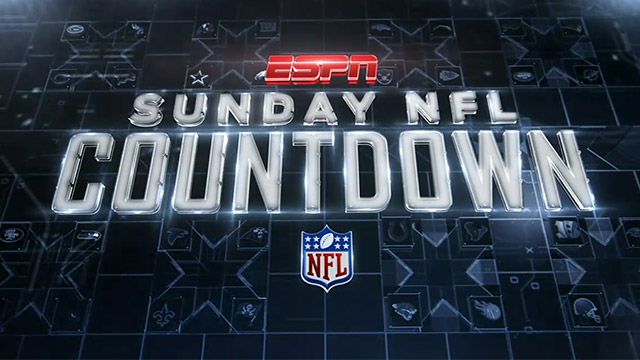 We return with Part III of our season-long look at the Sunday NFL pregame shows. After reviewing That Other Pregame Show and The NFL Today from CBS Sports, we move to the second oldest NFL studio show, Sunday NFL Countdown. It’s hard to believe that ESPN’s show is the second oldest NFL pregame show on record, but with CBS and NBC both losing rights at one time or another, it’s ESPN that has had the longest uninterrupted run with the NFL dating back to the 1987 season.

It was in the 1987 season when ESPN began airing a pregame show, first known as NFL GameDay (yes, ESPN had the name before the NFL took it back and gave it to NFL Network) and also had a highlights show called NFL PrimeTime which aired in the spot currently owned by NBC’s Football Night in America.

Sunday NFL Countdown has grown from an hour-long pregame to 90 minutes, then two hours and eventually to the three hours that it fills today.

If you want to see how Sunday NFL Countdown (then NFL GameDay) looked in its early days, here’s a segment from 1990 with Berman (and a lot more hair), Jackson and Theismann on the set and Roberts reporting.

Without further ado, here’s our review of this week’s Sunday NFL Countdown. Remember, your mileage may vary depending on your location.

Carter, Ditka, Johnson and Lewis have joined Berman and Jackson between 2007 and 2013. Jaworski has been an analyst on Countdown since being removed from Monday Night Football after the 2011 season.

Mortensen and Schefter provide the latest information on the league plus probables and injuries in various segments during the show.

This week’s best segment occurred near the end of the show where Jim Trotter reported on Pittsburgh Steelers wide receiver Antonio Brown signing Terrible Towels and other items as a promise to fans during training camp. And he received a medal from an Army soldier stationed in Hawaii and served two tours of duty in the Republic of Korea.

Another bright spot was the video of Green Bay quarterback Aaron Rodgers surprising a young girl and helping her in her campaign to raise awareness on pediatric cancer.

The segments with Mortensen and Schefter breaking the latest news are always good information for viewers.

Between 11:53 a.m. and 12:32 p.m. ET, there were no commercials. That’s a good thing. It also meant more uninterrupted Chris Berman, which may not be a good thing.

A Sport Science segment on LeSean McCoy using sumo wrestlers to show his acceleration and speed. It ended with Keyshawn Johnson and Adam Schefter in sumo suits attempting to wrestle each other and concluded with Ditka in his own suit falling on Johnson. It was a befuddling segment.

“Where You At?” featuring Cris Carter shouting and asking what happened to “missing players.” This needs to stop.

Adam Schefter, Wendi Nix and Ron Jaworski are the standouts on this show. They’re not on enough.

Cris Carter on Jim Harbaugh’s next move: “I believe that Harbaugh realizes he is a pro coach and is going to stay in pro football.”

Carter on Cam Newton: “Cam Newton is Ben Roethlisberger, but a great athlete.”

There’s not much that’s unique with this show. It follows the familiar pregame show formula that began with the NFL Today and continued with Fox NFL Sunday.

The only thing the others don’t have is Chris Berman who’s been with the show since 1987. You can be the judge whether that’s good or bad.

Watch for Adam Schefter’s reporting, Ron Jaworski’s breaking down of film and for Wendi Nix and the secondary set. The rest is filler.

Three hours is a long time. By the second hour, my mind was wandering.

Chris Berman is another reason why you should stay away.

By the time the show ended, it was time to shut the TV off and go outside to clear the mind. If you can actually sit down and watch a full three hours of one NFL pregame show, you may consider seeing your family doctor.

C minus. The show can drag given its lengthiness and it needs an energy injection.

Next week, we move to Fox Sports and a review of Fox NFL Kickoff.