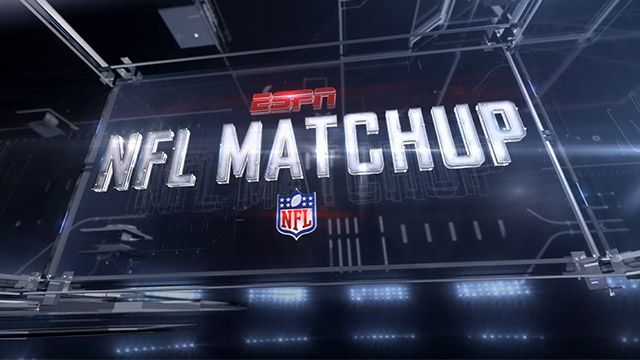 We continue our journey with the NFL studio programs with one of the oldest continuous-running programs, ESPN NFL Matchup. From 1993, it’s been airing every weekend during the NFL season as a program that breaks down the X’s and O’s of plays, looks at strategy and how certain plays work and don’t work.

Sal Paolantonio has been the host of the show since 2004 taking over for Suzy Kolber. Other hosts have included former Pittsburgh Steelers quarterback Mark Malone, Chris Myers and Stuart Scott. The current analysts are Merril Hoge and Ron Jaworski.

There’s no fancy bells and whistles in this show. We see footage from NFL Films and the coach’s tape, looking inside certain plays. Both Hoge and Jaworski provide their takes on the plays and highlight the moments where they go right and right when they fail.

For a while, NFL Matchup was the only program that provided this type of insight, but now, NFL Network has Playbook, however, Matchup is the original and is the best.

Let’s look at NFL Matchup in this latest edition of the AA Sunday Studio Spectacular.

“Jaws Playbook” where Jaworski focuses on one play. Jaworski spends a lot of time watching tape at the NFL Films studios and is able to pick up on the nuances of what makes a play work. He can break down both sides of the ball and it’s quite fascinating. It’s too bad that Jaws is no longer on Monday Night Football, however, this is where he gets to shine on a show that is built to his strength.

He’s very good in this platform.

We can’t point to a bad segment in this show, but we are annoyed with Sal Pal going over-the-top dramatics throughout the show. Not sure what is up with that, but Paolantonio is a solid reporter and doesn’t need to go overboard with the dramatics. Maybe Sal is undergoing a mid-life crisis or trying to inject more personality, but there’s no need as the footage is the star of the show and not the host nor the analysts.

We give this to Jaws. He’s the man on the show although Hoge is good on the program too. We prefer Jaws because he loves to study film and footage to find the most interesting nuance. It makes for some interesting television and you find that you learn something whenever he breaks down the footage.

Hoge is also good here, but Jaws is the true standout on this show.

In talking about the Sunday night game between Dallas and Philadelphia, Sal Pal said, “We got a prize fight in South Philadelphia on Thursday night!” Ok.

It’s a half-hour of breaking down the game footage to preview the upcoming week. This is a fun way to learn about game without the analysts talking down to the audience. No one likes to be patronized and NFL Matchup doesn’t do that to the viewers. It treats them with respect and that’s very unique about some network studio programs which tend to talk down to the viewers.

Watch for the breakdown of video. And with it being just a half-hour, it’s a quick view. Of course, the schedule for the show, at 8:30 a.m. ET on Saturday and 3 a.m. ET Sunday on ESPN2, then again at 2½ hours later on ESPN is not easy to catch, but with DVR’s, one can watch at your convenience.

Sal Pal’s overdramatics can get tiring real fast and there are times when all three men talk over each other. They don’t do it that often, but it’s annoying.

We were ready to award another “A” to NFL Matchup, but it falls just a bit short. While this is a fast-paced program and lasts a half-hour, there’s still something missing. No matter, the show is still quite good.

It’s too bad that ESPN won’t give it a better timeslot because it deserves to be showcased at a later time when more viewers are awake.

We give NFL Matchup a B grade and that is quite solid.

Next, we review tonight’s edition of Monday Night Countdown on ESPN.