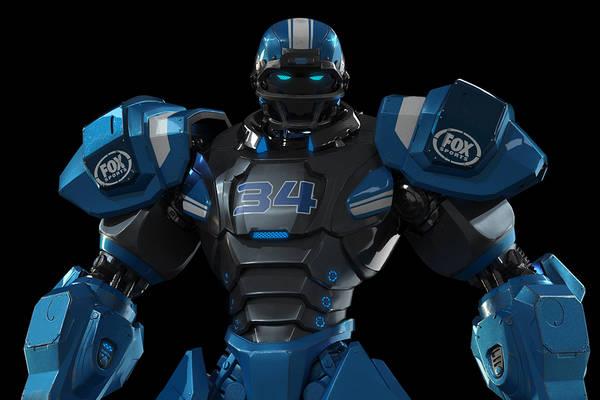 The Sunday Studio Spectacular continues its journey across all of the live Sunday NFL studio shows with a look at one of the longest running pregame programs, Fox NFL Sunday.

The show began in 1994 when Fox started its association with the National Football League. It has always been a one-hour program airing at noon ET. Terry Bradshaw and Howie Long have lasted the entire run. Jimmy Johnson started with the show, but left in 1996 when he became coach of the Miami Dolphins. Johnson returned in 2002. Analysts Ronnie Lott and Cris Collinsworth filled Johnson’s seat while he was gone.

James Brown was the original host, but he left the show before the 2006 season to become the lead of the NFL Today on CBS. Joe Buck would become the main host with Curt Menefee doing highlights when Buck was doing play-by-play.

But in 2007, Menefee became the main host and has been at the helm holding down the fort ever since.

Michael Strahan joined Fox NFL Sunday for the 2008 season and has been seated in between Long and Johnson as the 5th member of the cast.

Since 1999, Fox NFL Sunday has given time to a comedian for a picks segment. Jimmy Kimmel filled the role originally, but left in 2002 to lead his own late night show on ABC. Frank Caliendo took over and used the segment to do impersonations of John Madden, David Letterman, Terry Bradshaw, J.B., and Jack Nicholson. He stayed through the 2011 season. Since the 2012 season, Rob Riggle has hosted the picks segment.

Jay Glazer joined the program in 2007 to be the show’s NFL insider.

Other contributors to the show have included Jillian Barberie as the weather forecaster, Erin Andrews, Barry Switzer, Suzy Kolber, Pam Oliver and lest we forget Cleatus the Robot.

Time to grade Fox NFL Sunday. Remember, your mileage may vary depending on your location. Objects in mirror are closer than they appear.

With this being the 25th anniversary of the Herschel Walker trade between the Dallas Cowboys and Minnesota Vikings, Jimmy Johnson outlined how he manufactured the trade and how he cashed in the players he obtained from the Vikings for draft picks for the Cowboys. Johnson simplified how the trade was made and gave some interesting insight. Johnson said he didn’t want to play any of the men obtained from the Vikings because he didn’t want the fans to fall in love with them and he was building for the future. Of course, the trade was the impetus for the Cowboys’ three Super Bowl Championships in the 1990’s.

The other segment in this category was a report from Jennifer Hale on Carolina Panthers tight end Greg Olsen drawing inspiration from his young son, T.J. who is battling a rare heart condition.

I wanted to put Rob Riggle’s segment here, but it was actually funny this week. It depicted a Philadelphia Eagles fan and a New York Giants fan called “Michael Strahan, Jr. (no relation)” doing a podcast. It was well-produced so it won’t go in this category.

The open with actor Keanu Reeves narrating was the worst segment. The open sets up the week and the show, but Reeves narrates without emotion. Didn’t work.

Give this to Mr. Jay Glazer, the insider who broke news about how NFL general managers are treating Jameis Winston, either dropping him down on their draft boards or considering not drafting him entirely. Glazer works hard and is always on his phone.

Curt Menefee has quietly become one of the best studio hosts. As the traffic cop, he knows when to toss the softballs so the analysts can hit a home run, but he can also challenge when necessary. And he can shut down a segment when it becomes too much of a yukfest.

Howie Long on the Buffalo Bills vs. the New England Patriots: “Everything that Buffalo has done over the last few years, through the draft, through free agency and their move last week to go to Kyle Orton has closed the gap.” You sure about that?

The show keeps things light. Bradshaw has his country bumpkin act. Long is the straight man. Johnson doesn’t necessarily shoot straight and Strahan is supposed to be the young guy. It can be a crowded set, but everyone gets their thoughts in.

Glazer’s segments are good. There’s a good chance that he’ll break news or have some type of scoopage on the show.

The cast is aging. Bradshaw at 66 years of age and Johnson at 71 are eligible for Social Security. Long is 54. Strahan is the youngest analyst at 42. Not saying being old is a bad thing, but Fox might want to consider getting some contemporary analysts. CBS brought in Tony Gonzalez and Bart Scott this season to replace Dan Marino and Shannon Sharpe in a bid to get younger. While the jury is still out on CBS’s Gonzalez and Scott, Fox should look to bring in Randy Moss from Fox NFL Kickoff on Fox Sports 1.

This week’s show was stronger than previous editions. The analysis for the most part was good. The yuks were kept to a minimum this week. Glazer broke some news. Rob Riggle was actually decent.

We give this week’s Fox NFL Sunday program a very strong B plus. We were set to grade this show anywhere from C to a D minus, but the cast came in with their best this week. They almost got the first “A” of this series but fell a bit short.

Next week, it’s NBC’s turn and our first move into primetime. We look at Football Night in America with its multiple locations, multiple hosts and multiple analysts. Well to be exact, two locations, 2½ hosts, four analysts and two insiders. You get the idea.