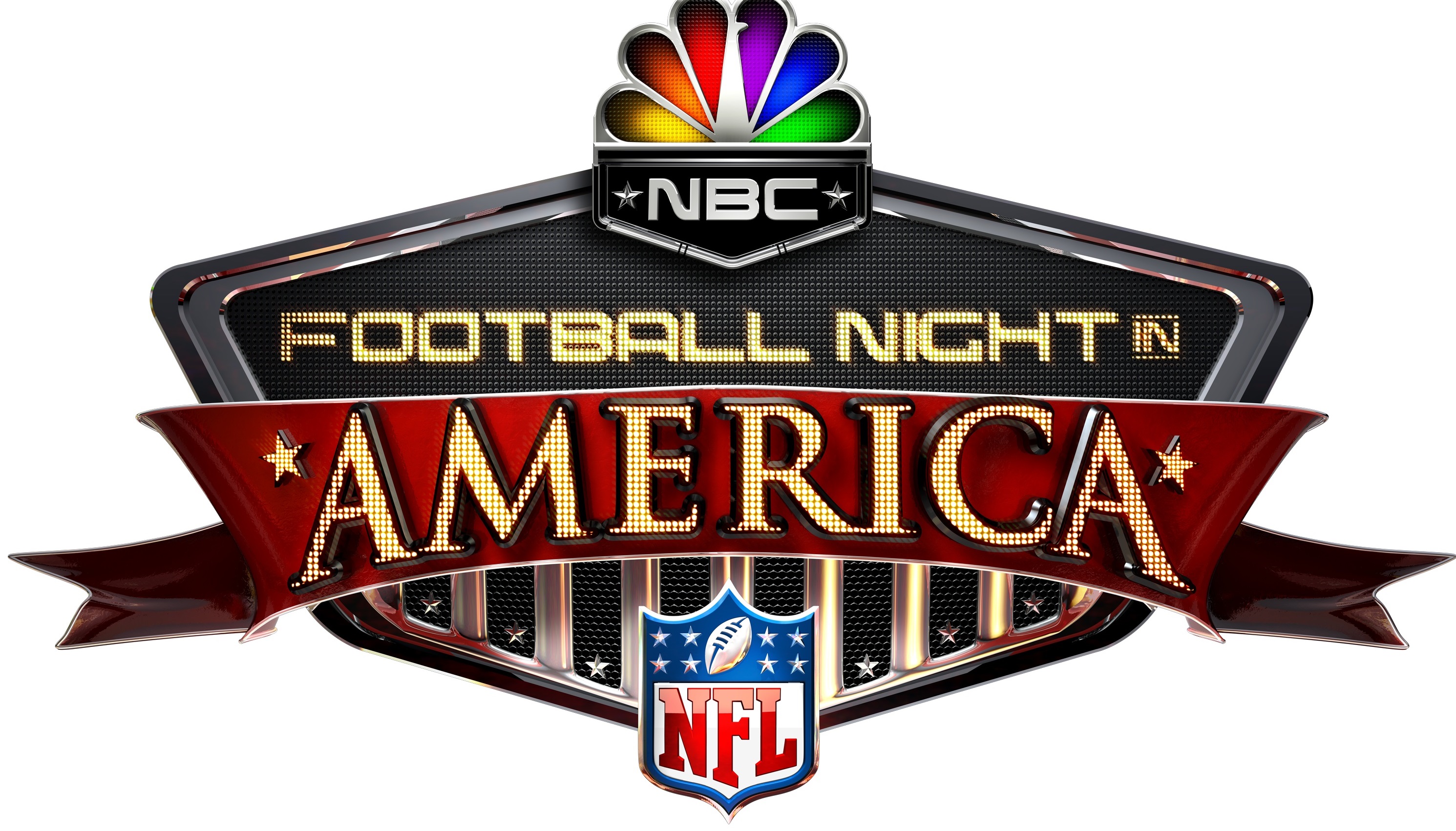 After five weeks of reviewing Sunday morning NFL pregame shows, we now reach into primetime as we look at NBC’s Football Night in America.

Established in 2006 when NBC returned to the NFL as the pregame show to Sunday Night Football, Football Night in America began as a highlights program airing all of the day’s action airing at 7 p.m. ET. First originating at NBC’s world headquarters at 30 Rockefeller Center in New York, FNIA used the plaza as a backdrop for the show. Now the show originates from Sunday Night Football’s game site and from NBC Sports’ home of Stamford, CT.

Bob Costas and Cris Collinsworth have been on the entire run of the program, first as in-studio co-hosts between 2006 and 2009, then as on-site host and analyst respectively. The original analysts were Jerome Bettis and Sterling Sharpe. Sharpe was replaced in 2007 by Tiki Barber. Bettis left after the 2009 season. Current analysts Tony Dungy and Rodney Harrison joined FNIA in 2010. Executive Scott Pioli was an analyst for the 2013 season. Hines Ward usually joins Bob Costas from the game site and has been in this role since 2012.

Peter King is also a program original as the show’s insider. Pro Football Talk’s Mike Florio came in to join King as an insider in 2010.

Keith Olbermann was a studio co-host from 2007 through 2010. He was joined on the highlights by Dan Patrick in 2008 and Dan has been solo as the host of the studio portion from both New York and Connecticut starting in 2011.

Josh Elliott joined FNIA this season as a segment host and interviewer.

The game highlights still remain a major part of the program. The first highlight will air between 7:10 p.m. and 7:15 p.m., then the show will run them through 8:05 p.m. with a break for an interview from Elliott.

From 8:05 p.m. through the program’s conclusion, Football Night in America goes into SNF game mode with a Costas interview and game predictions from Dungy and Harrison.

Let’s grade Football Night in America. This is only a review so please, no wagering.

Bob Costas’ interview with Peyton Manning and discussing the seven quarterbacks who held the career touchdown passing record before him. Some good introspection from Manning and some genuine affection for the game’s history by the Denver quarterback.

Football Night in America seems to push out the promos. There are promos for NBCSN’s Sunday Sports Report, English Premier League programming, The Dan Patrick Show, even for The Voice as Al Michaels was playing the role of ring announcer Michael Buffer. You had to see it to believe it. All that was missing was a promo for the NHL.

Also, Hines Ward’s segments lead to short sound bites of 20, 10, 9, 10, 22 and 2 seconds. Is there a reason why he’s there other than window dressing? In an already crowded group, Ward’s presence is redundant.

Dan Patrick as host. Does a good job in the highlights and also leading Dungy and Harrison to their points. Tony Dungy also excels when he’s doing the Simplifying the Game and Coach’s Clicker segment shines.

Nothing really weird this week. Although there was one segment in which Costas thought he was tossing to Mike Florio when he wasn’t. A flustered Costas passed it to Dan Patrick instead. But this was more confusion then anything else.

The show is a hybrid of ESPN’s NFL Primetime which used to occupy the 7 p.m. ET timeslot and the old NFL on NBC pregame. It’s a highlight program and pregame show tied into one. All but two games had highlights that were under one minute. Two games, Seattle-St. Louis and New York Giants-Dallas had highlights at 1:18 and 1:19 respectively. Overall, the highlights are quite short.

Dungy’s Coach’s Clicker. Costas’ interview which can be revealing.

If you’re looking for highlights, they’re too short for my tastes. If you miss a game, you want to see what happened and see if there was a key play. Football Night in America does try to shove them all in, but the promos and the interviews take away from the highlights.

The inside information rarely breaks news.

It’s not a bad show. The highlights could be longer. Football Night in America is a promo machine, but it’s leading into the number one primetime show, so NBC can’t be blamed for trying to introduce its audience to new things.