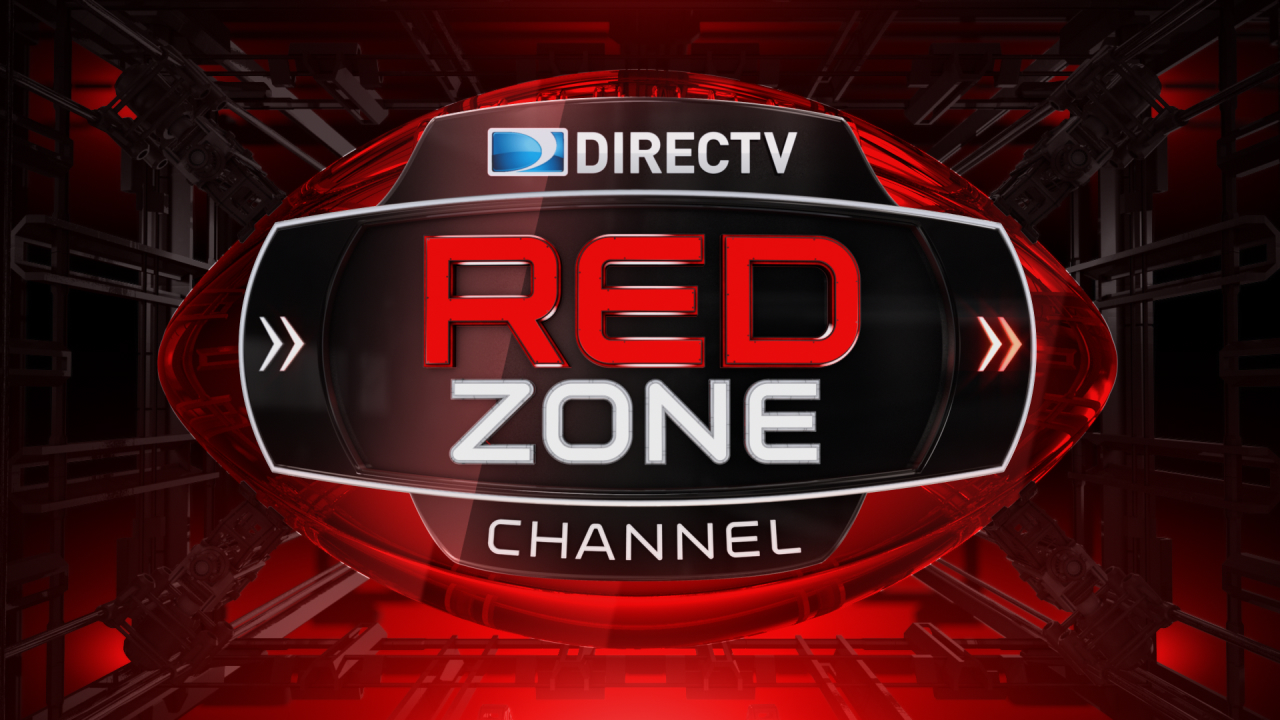 We forge ahead with our experiment to watch all the Sunday NFL studio programs. While some have been painful to watch, others have been just average while even others have surprised us. Through eleven weeks of our viewing experiment, we had yet to fully enjoy a studio program. That was until this week.

DirecTV’s Red Zone Channel is the original live cut-in NFL program. Developed in 2005 and hosted from the beginning by Andrew Siciliano, the Red Zone Channel began with access to NFL on Fox games only, but expanded to CBS the following year. Red Zone Channel started with showing scoring opportunities inside the 20 yard line (hence the name), but has branched to showing breaking live action whether it’s inside the Red Zone or a team on a potential game-winning drive.

The Red Zone Channel was so successful and became so popular among DirecTV NFL Sunday Ticket subscribers that NFL Network developed its own RedZone for cable subscribers in 2009 with Scott Hanson as host.

From the 1 p.m. ET opening kickoffs until about 7:30 p.m. ET, Andrew Siciliano is the only on-air presence to guide viewers from game-to-game.

Let’s grade the Red Zone Channel. As always, your mileage may vary depending on your location and objects may be closer than they appear in your rear view or side mirrors.

During the early window when there are as many as ten games, this is where the Red Zone Channel really shines. You’re taken from game-to-game-to-game-to-game and you see plenty of live action. If you miss a play, Red Zone Channel will make sure you see it via a highlight within seconds after it happened. And during halftime, you’re updated on all of the games as Siciliano narrates the highlights with ease.

During the early window, there will be multiple games that will be in the red zone so the channel can go double or even triplebox. In HD, this looks marvelous. 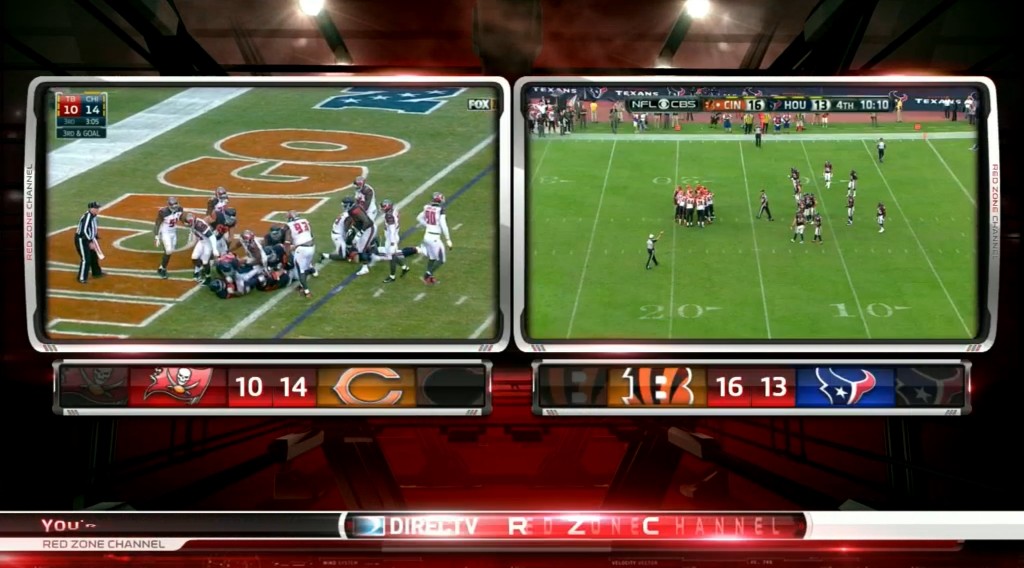 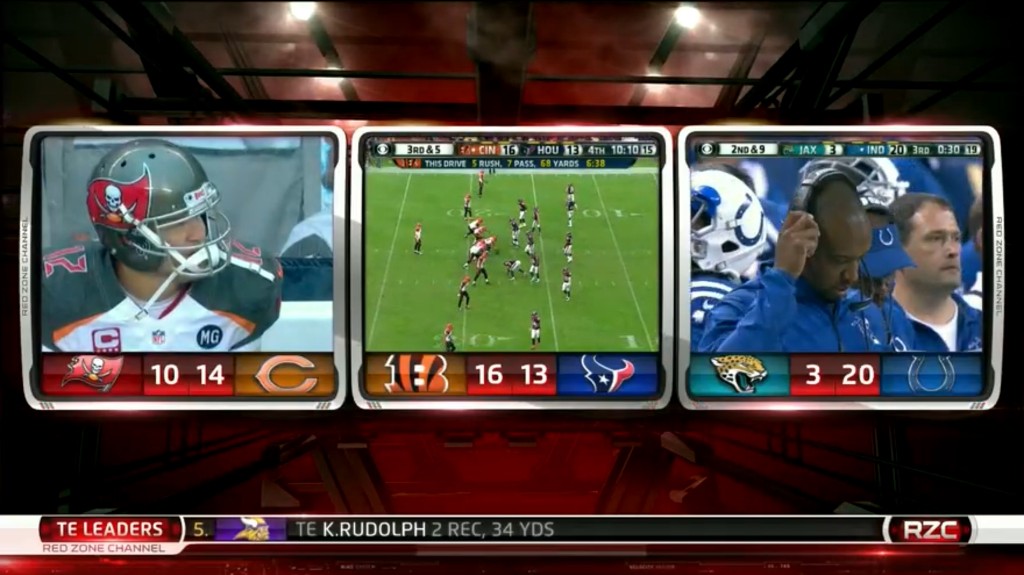 But with so many hours on the air, there’s bound to be a glitch like this one with the triplebox. Oops. 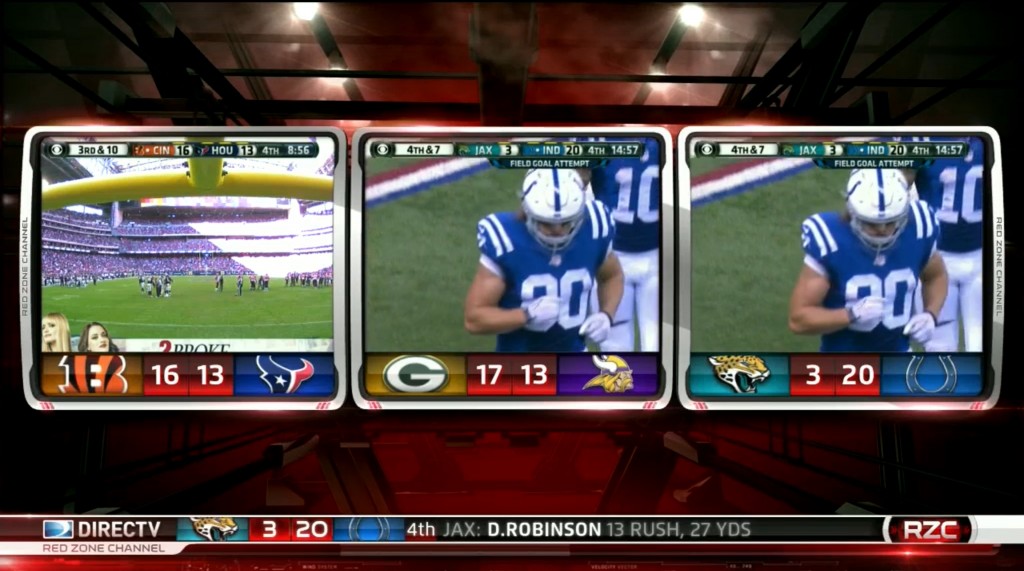 Sometimes, that can’t be helped.

The best part of the early window is when games begin to wrap up and there are two to three games going down to the wire. Red Zone Channel has the ability to take you to each game, show key plays, and game-winning drives in their entirety. The Red Zone Channel may be in its 10th season, but this never gets old. That 30 minute window is one of the best in all of television.

If there is a “worst” segment for Red Zone Channel, it would be during the late window when the byes are in effect and there’s an average of just three games taking place. Sometimes all three games are in commercial and Siciliano has to narrate highlights of the early games to fill the segment. And sometimes, those highlights have to be repeated often throughout the late window.

That’s not the fault of the Red Zone Channel, it has to find a way provide content to the viewers. This is where the NFL should provide four or five games in the late window.

The only performer on Red Zone Channel is Andrew Siciliano and he always steps up. He knows all of the players and can transition into play-by-play when necessary. Siciliano is your guide for all of the games and he never misses a beat. Plus, he rarely has to take a bathroom break during the 6½ hours he is on the air. And like 24’s Jack Bauer, we’ve never seen him eat on the set, but then again, when was the last time you saw a TV anchor eat a sandwich?

In addition, Siciliano provides the right amount of humor to the job making references to movies (“Have you seen Martellus Bennett?” as an ode to Pulp Fiction), pop culture and other sports.

You get live action, highlights, updated fantasy information and just about every score imaginable. For a football fan, this is heaven. For some fans, this is the only way to watch during an NFL Sunday.

And it’s spawned imitators from ESPN Goal Line, NFL RedZone and others.

See above. Live action, scoring updates, fantasy updates and no commercial breaks. Every sport should have a Red Zone-type channel. And once you watch Red Zone Channel, it’s hard to go back to watch a single game.

There is no reason why to stay away especially if you have a fantasy team. It’s a great way to keep track of your players/team.

Through the first ten weeks of the Sunday Studio Spectacular, none of the shows were worthy of an elusive A grade. Fox NFL Sunday came close with a B+, but the nine others came short of reaching Grade A quality. Well, we can say Red Zone Channel has reached the top of the mountain.

Red Zone Channel changed the way we watch sports and it has become part of the sports vocabulary. And with Andrew Siciliano, the channel provides viewers with plenty of entertainment.

In a roundabout way, we’re saying that Red Zone Channel gets a well-deserved A+ and that will be difficult for the other programs that are next in this series to match. This show is as close to perfection as you can get. No show is ever perfect, but this is close.

Next week, we continue our DirecTV review and move to the all-new Fantasy Zone Channel which began this season and is hosted by Kay Adams.