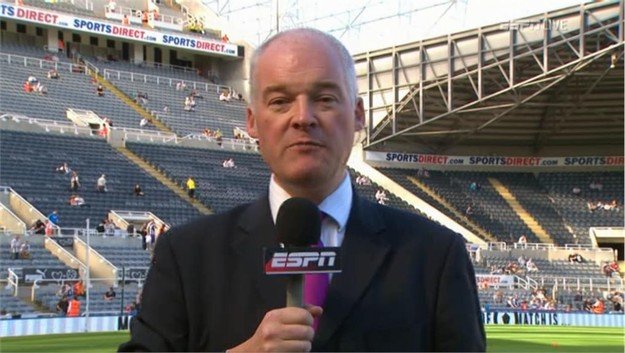 Jon Champion’s life headed in a completely direction following one cricket match he played in as a teenager when, as he describes, “didn’t know what I wanted to do.” Following the game, a local radio station asked him to do a phone interview to discuss his part in the game. They were impressed, though he acknowledges his performance was “fortified by a couple of beers.”

Two weeks later, the sports editor of the station (located in Champion’s home of York) called and, as Champion puts it, said “we really like the sound of your voice, would you fancy doing a little bit of reporting?” Within six months, the BBC had decided they liked what they heard, and gave him part-time work while helping him pay to attend the University of Leeds. They agreed to give him a job as a sports reporter upon his completion (Champion says that prior to the interview, he was told “here are the questions we’re going to ask, here are the answers we want to hear, show up at 3 o’ clock and don’t forget to wear a tie!”), and they were as good as their word.

A few decades later, Champion is one of the more prominent commentators of football in England, having covered every World Cup since 1990. A three month sabbatical by the legendary John Motson gave him a regular gig on the famous BBC Match of the Day (funny that with NBC’s success, we can now call it the “original, British version”). Since then, he’s called the Champions League and Premier League for ITV, Setanta Sport and ESPN UK. Just recently, however, he’s gained popularity in the United States for his work on this summer’s most recent World Cup, and as he’s often heard on NBC’s Premier League coverage working on the “world feed” for various matches.

During his tour of the United States, which saw him call matches in Seattle, Toronto and New Jersey (his family is joining him for a holiday here) he spoke to me from Red Bull Arena, where we discussed the nature of soccer commentators, this especially amazing tournament (“after the Netherlands-Spain game I thought, ‘Well, crumbs, I’ve just done the game of the World Cup!'”) and whether he’d like to work more here after the success of the World Cup.

Steve Lepore: Soccer commentators, especially English ones I think, it’s not necessarily intentional but they seem to be allowed to let their personalities come out a little bit more. You mention John Motson, Barry Davies… is that an edict from anyone or is it just natural?

Jon Champion: It’s not an edict, in fact, if there is an edict — certainly in my case, and John and Barry’s when they came through — it’s that less is more. Allow things to breath and don’t feel the need to speak all the time. I was taught very early on that the picture is so powerful, you can’t hope to compete with it, all you can hope is to occasionally augment it, and add additional information and improve the overall viewing experience for the person at home watching the telecast.

That was the most important lesson that I was taught, particularly coming from radio, where you’re like an artist with a blank canvas — you can paint pictures, you’re talking all the time, you can paint those pictures in whatever style you wish — so to move to television is a bit like putting a straightjacket on, to start with. Once you’ve hopefully got the rudiments of doing soccer commentary on the television, then perhaps you branch out and that’s where a little more personality is allowed to come in. What we’re all taught is that, any personality that you do show, shouldn’t dominate the broadcast.

SL: On that note, what was ESPN’s edict when the brought you over to broadcast this World Cup?

JC: The word they kept throwing at me was “authenticity,” they just wanted the same experience as people in England were getting in terms of watching their sport. I can sort of understand it, since my first taste of watching American sport on TV in the UK in the 1980s was watching NFL, and I remember Pat Summerall and John Madden, and it was Frank Gifford hosting the coverage on Channel 4 in the UK. It sort of transported me to a foreign land, and I thought I was getting the full experience.

I think that’s what ESPN were trying to replicate with recruitment of announcers for 2010 and then subsequently for 2014. They talked to me about doing 2010, but I’d already signed a contract with one of the UK broadcasters. We had a subsequent conversation about 2014 a few years down the line.

SL: What is the World Cup experience for a commentator? It’s not like a league where it’s once or twice a week, you’re going all over a country calling matches seemingly every other day…

JC: I’ve done seven of them now, and what I’ve learned is that the most important part of a World Cup is the month before it. That’s when you lock yourself in a darkened room at home and you do all your preparatory work. You watch DVD after DVD, you find internet footage of every team, so that you know all the players, you do all your notes. I go with a wallet of papers and notes for all the teams I’m doing — I think I had 13 teams in the group stage — and that’s in the month beforehand.

When I get on the plane to go to a World Cup, I want to know that I know all the 23-man rosters of the teams I’m doing, what they look like, how they run, distinguishing marks, all their biographical details and general material on the teams. Announcing the matches is the easy bit, the hard yards are that month of preparation and tapering back. Throughout the year, I’ll be taking notes on all the teams on what might become my commentary notes.

SL: Soccer commentary is able to highlight the sport’s clearly defined heroes and villains. The commentators are able to let you know about a player like Suarez (Champion has been at the mic for each of Luis Suarez’s last two biting incidents) whereas in another sport you might have to be a bit more even-handed.

JC: Definitely, but I think I have be carefully even-handed when Suarez did what he did, because until still photos started appearing on Twitter of the bitemark on Chiellini’s shoulder, you couldn’t definitively say he’d bitten the opponent because the replays maybe suggested that he’s head-butted him. I was working with Stewart Robson and on the first replay, he was very good. He said: “I think he’s bitten him.”

We then had to couch it in language in which we said “it looks very much like that’s happened” but you couldn’t actually nail it and say “he has bitten Chiellini.” You couldn’t go that far because that would’ve been unfair. You have to leave that little element of doubt until physical evidence surfaced.

In terms of heroes and villains, you’re right. But you’ve also got to be very careful not to pre-judge people. You can allude to their past misdemeanors if you like as a backstory, but you can’t necessarily judge them, you can just make people aware that that’s what the situation is.