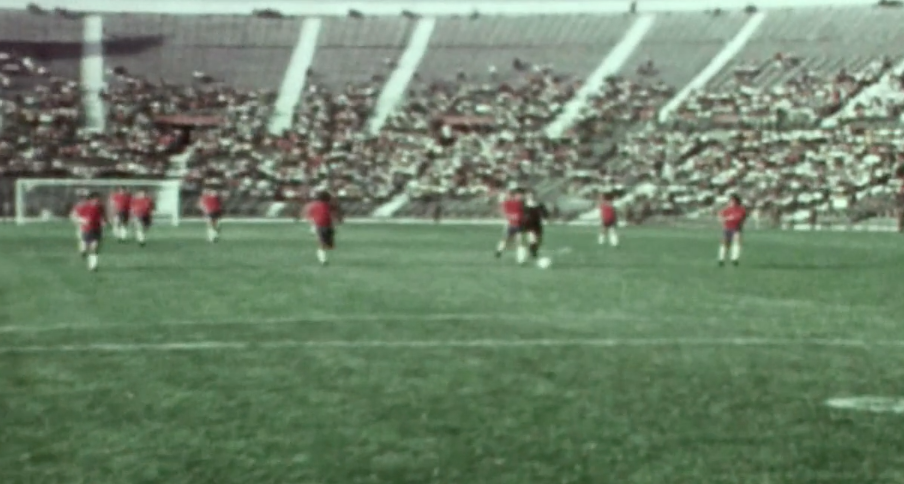 Review – Unlike Maradona ’86, I wasn’t as familiar coming into the story that is the focus of The Opposition.  It’s interesting that ESPN would choose to schedule these two 30 for 30 soccer shorts back to back as one is about one of the game’s greatest ever players and the other is about a political crisis that found its way into sports.  It’s not too often you expect to hear a cameo from the Nixon tapes in a sports documentary, but alas, here we are.

The Opposition tells the story of the Chilean National Team hoping to qualify for the 1974 World Cup against the backdrop of social unrest in the country.  The story is largely told through two of the most outspoken players in the Chilean team, Carlos Caszely and Leonardo Veliz.

The film has a lot of history to tell in a little amount of time as a half hour film.  Viewers move quickly through the election of Salvador Allende as Chile’s president in 1970 and the military coup d’etat on September 11th, 1973.  Allende killed himself with a rifle shot that day.

After the coup, the National Stadium was used as a concentration camp by dictator Augusto Pinochet.  Thousands of Chilean citizens were held at the stadium and some were tortured, raped, or killed.

At the same time, the Chilean soccer team was tasked with their two-legged playoff against the Soviet Union while the country was spiraling into a brutal dictatorship.  After the first leg ended 0-0, the USSR protested playing the second leg in Santiago and wanted the game moved to Peru or Argentina due to the well-known fact that it was being used as an internment camp.  FIFA went to inspect the stadium and declared that the game would be played as scheduled, even though political prisoners were withheld from their sight inside the bowels of the national stadium.

It’s inconceivable to look back and consider that the governing body of world soccer allowed a game to be played at a venue where an oppressive regime was killing its own citizens, but that’s FIFA.  One couldn’t help but hear of FIFA’s irresponsible governing in 1973 and not think about what they are doing today, specifically the corruption charges surrounding the 2022 World Cup scheduled for Qatar.

When the USSR failed to show up for the second leg, Chile took the field in front of their cheering fans at the national stadium to score an uncontested goal to send them to the World Cup.  Veliz and Caszely speak honestly and openly about the shame of that moment and how they were being used as a show put on by the Chilean military government and FIFA.  To think that this scene was being played out at a venue that had seen atrocities take place is staggering.  Chile would advance to the World Cup, but they would fail to win a game before exiting the tournament.

The most impactful moment of the film is when Carlos Caszely speaks about his mother being tortured by the regime so he would not speak out against the government during the 1974 World Cup.  Caszely had famously refused to shake the dictator’s hand when the team met Pinochet before the tournament and continued to be one of the foremost opponents during his rule.  To hear how the national team was used by the country’s dictator from the players themselves is chilling for American viewers.  At its heart, The Opposition is a story about what it means to represent one’s country, even when there are the deepest inner conflicts in doing so.

Rating – It would be difficult for ESPN to expect an American audience to flock to a short documentary about the Chilean national soccer team.  But much like Hillsborough, this is a very important story where sports and society intersect.  It feels more like a history lesson than a sports documentary at times, but that makes it no less valuable to soccer fans.  Watch it, then go and do some more research into the topic because it is one of the more troubling and fascinating stories from soccer’s global history.  8/10