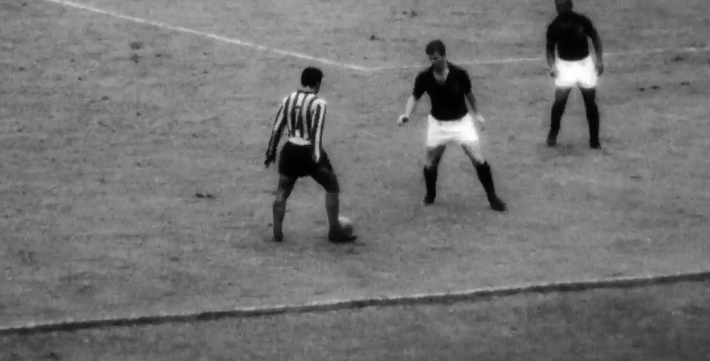 Title – The Myth of Garrincha

Review – One of the great soccer players who ever lived now rests in a cemetery in Rio de Janeiro with someone else’s headstone marking his grave.

“He deserved something much better.  He was the greatest player ever.  He deserved better”  That’s what the man who buried Brazilian soccer legend Garrincha tells us at the beginning of The Myth of Garrincha.

Unless you are well steeped in the history of world soccer, you may be unfamiliar with the story of Manuel Francisco dos Santos, or as he was more widely known as, Garrincha.  He was a two time World Cup champion with Brazil in 1958 and 1962, winning the Golden Boot and Golden Ball at the latter tournament.

The miraculous thing about Garrincha is that he was lucky to walk, let alone be a legendary soccer player.  His knees were deformed and bent both ways, yet he defied all logic and become one of the most gifted players to ever compete.

The Myth of Garrincha is appropriately titled because his footballing genius remains somewhat of a mystery today.  All we have are a few YouTube clips and flowing prose regarding the ultimate sporting entertainer of his day.  A biography tells of one instance from his days at Brazilian club Botafogo that displays Garrincha’s ubiquitousness:

“He stood by the touchline dressed in the familiar black and white stripes of Botafogo Football Club with the ball at his feet, his opponent standing opposite him. In a flash he bolted to his right and with the defender in hot pursuit he started to sprint down the wing. Two or three steps later he ran back. He had jumped over the ball and left it behind. Garrincha stood dead still over the ball for a few seconds and then bolted down the wing again. Once more the defender followed him and once more Garrincha had left the ball exactly where it was… Garrincha stood with the ball at his feet for a second or two and then darted off down the wing once again, this time with the ball. The defender didn’t move a muscle.”

But unfortunately, there is another side to Garrincha’s story that turns a legendary figure of sporting brilliance into a tragic figure of destruction and desolation.

Troubles with alcoholism, physical pain from his knee condition that was never cured, being a noted philanderer, and a drunk driving accident that claimed the life of his mother-in-law are just a few accounts from his downfall.

It’s difficult to formulate a good documentary about a man who died at the age of 49 in 1983 with any kind of contemporary storytelling.  However, through the words of veteran journlalists, friends, biographer Ruy Castro, and Garrincha’s second wife, singer Elza Soares we are given a window inside the best and worst of Garrincha.

And that’s really what this short film is all about – the best and worst of us as human beings.  A man who was considered “the joy of the people” but put himself and his family through much sadness.  A complex individual whose myth just gets more complex with time.

Rating – Out of all the 30 for 30 shorts, this was the one I was most interested to see because of the fascinating, inspiring, yet troubling nature of Garrincha’s story.  It’s a story that’s filled with triumph and tragedy and it’s told well over the course of these 30 minutes.  Even though there were so many ups and downs in Garrincha’s life, this film is very steady and linear as it leads viewers through the rise and fall of Garrincha.  It certainly leaves you wanting to find out more about the subject, which is one of the best things you can say about a documentary in any medium.  9/10