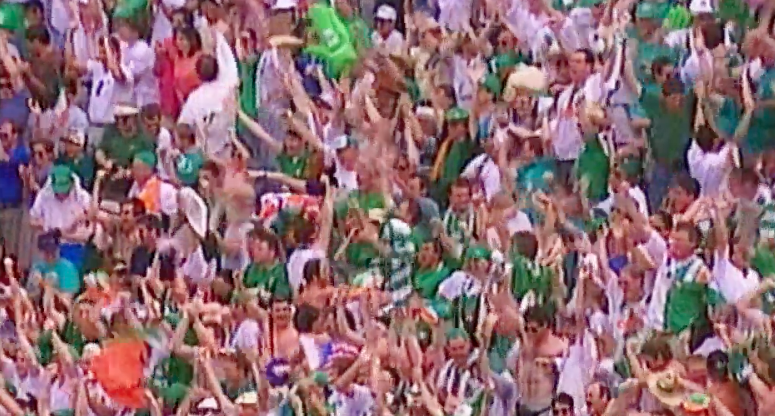 Review – Halfway through the 30 for 30: Soccer Stories, it’s clear ESPN has focused in on stories that are multi-dimensional.  Whether this be legends of the game like Diego Maradona or Garrincha or moments in time where sports and society collide.  Ceasefire Massacre, much like The Opposition that debuted last week, is a case of the latter.

The Troubles tore Northern Ireland apart for decades with violence between nationalists (largely Catholic) and unionists (largely Protestant).  Ceasefire Massacre tells the story of the Loughlinisland Massacre, when UVF paramilitary forces stormed a bar in a quiet Northern Ireland town and killed soccer fans.  Armed individuals stormed the Heights Bar, killing six and wounding five others while they were watching the Ireland-Italy game at the 1994 World Cup at Giants Stadium.

At the time, the Ireland national team had just experienced one of their greatest moments. A 1-0 victory over world powerhouse Italy at the World Cup.  Ireland had qualified for the World Cup thanks to a dramatic 1-1 draw at Northern Ireland that was surrounded by tension and violence in the region.  The highlight of the film is hearing how the players came together although they were separated by borders and religion to represent something greater than the division that tore the island apart.

Ceasefire Massacre is really two parallel stories happening in concert.  First is the growth of the Irish team and the jubilation with qualifying at the World Cup.  Sports have a unique way of representing society, especially when it comes to national representation and playing for a country.  The fact that an Englishman, Jack Charlton, was coaching the Irish team is a huge deal, but one that might be lost on those not as familiar with the history of the island and its people.

The second story is of the violence happening in Northern Ireland and the complicated political situation.  As the documentary shifts to what happened at the Heights bar, soccer takes a deserved back seat.  When you hear from victims and relatives of victims of the shooting, you quickly forget about the World Cup.  Unlike The Opposition and the volatile, intertwined relationship between the Chilean national team and dictator Augusto Pinochet, the World Cup is very distant from the turmoil happening across the Atlantic and at times it really does feel like two different films trying to fit into one.

As the film ends, the narrator tells us the meaning of this date for the Irish people.  “June 18th, 1994 was both the greatest moment in Irish sports history and also one of the island’s darkest times.”

Rating – Ceasefire Massacre is an ambitious effort in that it attempts to tackle both a soccer game and a decades-long violent struggle in just 30 minutes.  At times though, it’s difficult for the viewer to have that connection between the two kept at the forefront.  6.5/10