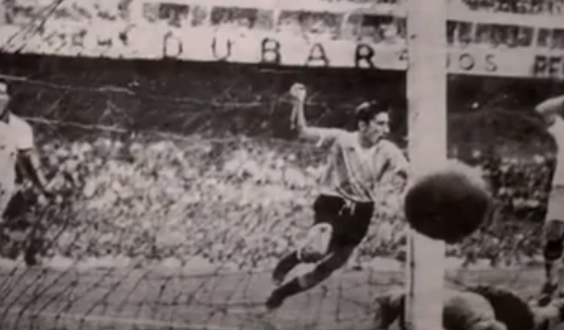 Title – Barbosa: The Man Who Made Brazil Cry

ESPN’s last 30 for 30 soccer short focusing on the 1950 World Cup, Barbosa: The Man Who Made Brazil Cry, begins with a quote that seems so out of touch with reality that it can’t possibly be real.  Yet it is, and it displays the significance of soccer in Brazil and the shock of what transpired that year.

The Brazilian playwright Nelson Rodrigues said, “Everywhere has its irrevocable national catastrophe, something like a Hiroshima.  Our catastrophe, our Hiroshima, was the defeat by Uruguay in 1950.”

The 1950 tournament was unique because the winner was not decided in a tradittional final, but in a four team final group.  The home country Brazil advanced to the final stage alongside Spain, Sweden, and Uruguay.  Brazil had defeated Sweden 7-1 and Spain 6-1.  They only needed a draw against Uruguay (who had drew with Spain and defeated Sweden) at the Maracana in the final mach to win the World Cup.

The fact that Brazil would win the World Cup approaching the match was not a question.  Brazil was called World Champions in the local papers before the game even started.

200,000 people filled the Maracana to celebrate a Brazilian triumph.  Brazil scored in the early stages of the second half to take a 1-0 lead, but Uruguay equalized with just under 25 minutes to go.  Uruguay then took a stunning lead when Alcides Ghiggia slid a shot past Brazilian goalkeeper Moacyr Barbosa in the 79th minute.  Having the original call from the day and hearing the silence in the background is incredible.  Uruguay won 2-1 and one of the great upsets in sports was completed.  Having Ghiggia talk about the goal on the match and the World Cup winning goal is a coup for ESPN and the series.

The game combines two of the most recognizable sporting narratives – a great upset combined with a tragic, Bill Buckner like figure.

Barbosa, called the best goalkeeper of his time, and a revolutionary player at his position, was criticized for allowing a soft goal to Ghiggia and took the brunt of the blame.  Not just from a fanbase, but from an entire nation.  The documentary tells a story of Barbosa walking into a store several years later and having a woman tell her son that he was the man who made Brazil cry.

In a seemingly cruel twist of fate, after an injury ended his playing career, he worked at the swimming pools at the Maracana.  Barbosa’s post-soccer life continued to be haunted by the goal that he gave up to Ghiggia.

It’s very interesting to note that with the 2014 World Cup taking place in Brazil that ESPN has focused mutlple 30 for 30s on their soccer history.  But they aren’t stories about Brazil’s succes though.  But rather stories about tragic heros like Garrincha and Barbosa.

Barbosa may have made Brazil cry, but it’s the stories of his tears that resonate most in the film.

Rating – This documentary tells Barbosa’s story well, but it’s missing some crucial historical context.  More details about the 1950 tournament and the scope of Uruguay’s upset would add to the drama and intrigue surrounding Barbosa.  For instance, Brazil’s colors were white before and during the 1950 World Cup before ditching it for their now iconic yellow.  Like many of these other shorts, part of that is due to length.  That said, it’s still a fine effort about a compelling story from what has truly been an outstanding series. 8/10