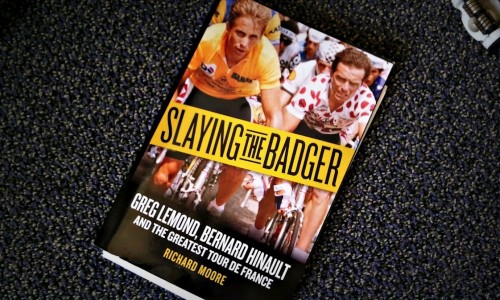 Most Similar To – 9.79 as well as ESPN-distributed Senna.

Grade – Right outside of the top ten.

Review- Unless you’re an individual who just can’t enjoy a sports documentary unless it covers a sport you’re overly familiar with, Slaying The Badger brings the goods. Coming from a literary background (kudos to whoever is the first “the book is better than the movie” commentor on this article), with a seasoned documentary director, and a very robust amount of archive footage as well as participation from the necessary pupils, there is very little to nitpick at.

Slaying The Badger centers around the 1986 Tour De France with about 2/3 of the film being devoted to the race. American cyclist Greg LeMond’s upbringing and early career, the ’85 Tour De France, and French cyclist Bernard Hinault’s storied career serve as one quickly paced booked. LeMond’s career after 1986 and the beginning of cycling’s doping era serves as the other.

The film never drags and with LeMond candid and genuine (his wife beside him throughout, often adding in details and perspective that seems to not fit LeMond’s retelling to his annoyance) we quickly begin to empathize with LeMond’s situation of being an outsider abroad having to wait patiently and loyally in the shadow of the revered Hinault, his teammate and the preferred team leader by ownership, management, the media, and fans.

The question of who would lead and who would have to sacrifice personal ambitions arose in the 1985 Tour De France but was smoothly diffused with the 1986 Tour De France believed to be part of that arrangement. What unfolds, as tremendously chronicled in the film, is a compelling character driven chess game that unfolded over 23 stages, through the press, and team functions and facilities as dysfunction, distrust, duplicitousness, national pride, and team management’s continuos meddling sucked the sportsmanship, pride, and camaraderie out of a fantastic event.

While LeMond’s account seems to register with the viewer as the truth and gains additional credibility as teammates, team employees, and journalists all give similar insights backing LeMond’s retelling, it was a bit odd that Hinault and his camp would often disappear from the film at the more contentious moments. While they participated in the film, did they limit the scope of the questions in advance of their interviews or were they just non cooperative with some of the harder questions? The LeMond narrative was clear and seemingly verified many times over, but at times it felt we weren’t getting the other side of the story. It very well may be that there wasn’t really one to tell or anybody who wanted to try.

On a positive note, ESPN hasn’t released a 30 for 30 in July since 2010 and has typically shied away from films that promote sports they do not own broadcast rights to.  Think about it – outside of Lance Armstrong’s doping when was the last time ESPN devoted any serious time to the Tour de France? Given they’ve also had a film covering the Olympics this year as well as an April film (also the first one since 2010 in that month), it’s very encouraging to see the 30 for 30 brand expanding a bit after what seemed like a couple of flat years in terms of output and scope of topics. That’s promising not just for the present of 30 for 30 but for the future as well.

This film gets high marks from me as it’s a compelling story that’s hard not to get sucked into, is a largely untold story for younger generations or those who just didn’t follow it back in 1986, and the filmmaking itself is in the top tier of 30 for 30s. If you’re like me and are loathing where we are on the sports calendar, in addition to the fact that many popular shows are out of season, here is a great way to fill the void and lose yourself in an American sports triumph that is largely unknown by most.