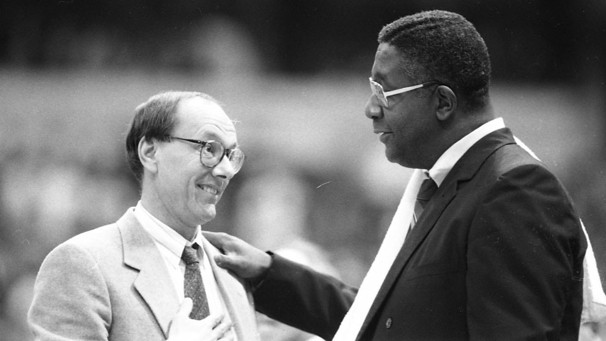 Length – 2 hours with commercials (102 minutes without)

Most Similar To – Pony Excess, Small Potatoes: Who Killed the USFL?

Review- Over the years, the two most dependable 30 for 30 time slots have been after the Heisman ceremony and after the NCAA Tournament Selection Show. That said, leading up to my viewing of Requiem For The Big East, I somewhat wavered on that almost assured quality and consistency and somewhat lowered expectations.

The title was a bit artsy and the promos were a bit vague. I crossed my fingers Wednesday night that I wouldn't have to spend 2 hours playing on my phone.

But my intuition was wrong…..very wrong. I loved Requiem For The Big East.

My main two criteria for these reviews are A) How good of a story is it? and B) How well did you tell it?

Some of my earlier trepidation is that I didn't really know what the story would focus on and that featuring an entire conference would be too wide of a narrative to tightly package into a documentary. While the dissolution of the Big East is covered to some degree, the vast majority of the film covers the conception of the Big East and its meteoric rise to prominence in its first years as a conference in the early 80's.

The years in question were a fresh story to me because they took place either before I was born or when I was in diapers. The Big East (outside of football) I had familiarity with pretty much started with Allen Iverson, Ray Allen, Kerry Kittles, and John Wallace so I greatly appreciated the history lesson.

So how well was the story told? Really well. Part of that is credit to the director, Ezra Edelman, who has done some fabulous work with HBO in the past including Magic & Bird: A Courtship of Rivals, Brooklyn Dodgers: The Ghosts of Flatbush, and The Curious Case of Curt Flood. A large part of the credit goes to what essentially feels like 100% participation of the principle characters.

Of those still alive, there wasn't a single individual that was talked about that wasn't a part of the film. From memorable players like Patrick Ewing, Chris Mullin, Ed Pinckney, and Pearl Washington to a crew of coaches that include Jim Boeheim, John Thompson, Jim Calhoun, Rick Pitino, Rollie Massimino, and Lou Carnesecca, as well as various conference executives and television personalities.

It's has the feel of a really great oral history article, although there is some fantastic footage so we're not bogged down in just pure interviews. For those familiar with The Big East in the 80's, I'm sure they'll feel a strong sense of nostalgia watching.

There is an absolute bevy of great stories, personalities, games, and narratives to sweep you away for the 2 hours. I'm still grinning about the infamous sweater game and despite having no skin in the game, I do feel the sense of loss now that conference realignment has regurgitated the Big East into yet another barely recognizable incarnation.

Artistically weaved into the many tales of the early days of Big East are shots from the final Big East Tournament game before the conference as many remember it was put down for good. The film does cover the circumstances that unfortunately caused its demise in a fair way although didn't seem too keen on prying much into ESPN's role in conference realignment.

Requiem For The Big East was interesting, well made, insightful, well paced, funny, and sad. It's significant enough of a story that if you're not a college basketball fan, it's still compelling enough of a story to warrant the investment in watching. The film leaves you with a strong taste of "those were the days" and that says a lot considering for many including myself, we didn't live through those days. Despite that, the storytelling is so dynamic that the tinge of nostalgia resonates regardless. With that in mind, Requiem For The Big East clocks in as one of the better 30 for 30's and one you'd be wise to set your DVRs to record.