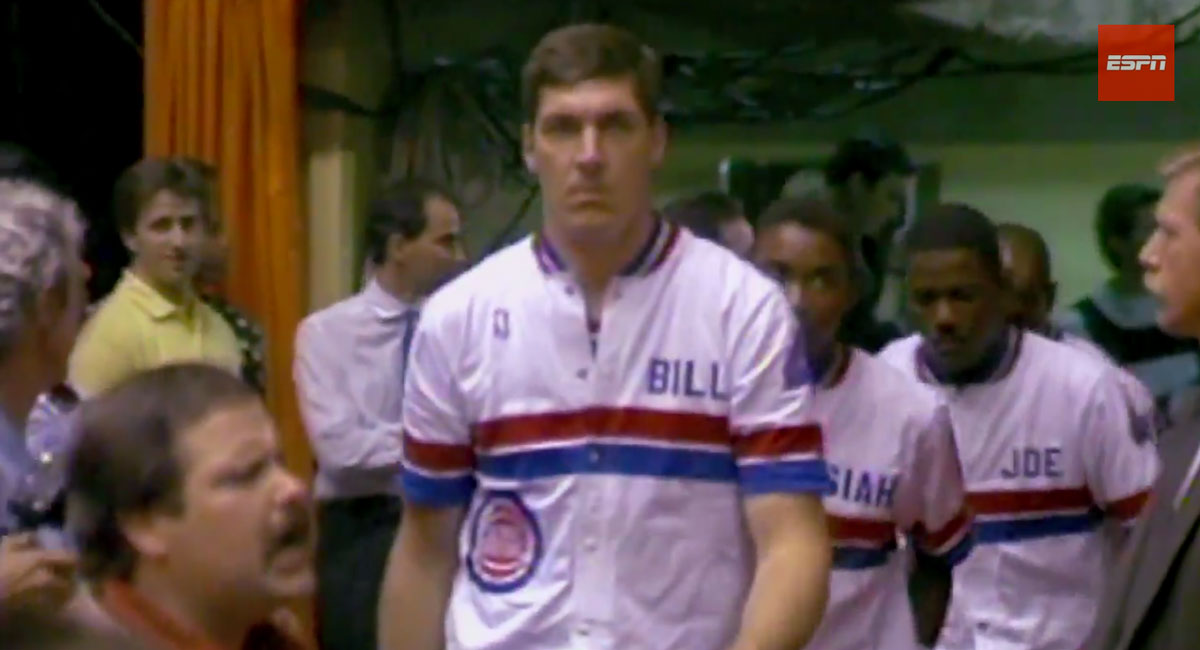 Length – 2 hours with commercials (102 minutes without)

Most Similar To – The Fab Five, The U

Review– Spanning the entire sports documentary space, I have to admit I have a bit of a sweet spot in terms of preferred time setting for films. I was born in 1982 and by 1988 was the kid in class who prided himself on knowing the most about football and baseball. My thirst for sports knowledge would spread to basketball and beyond in the years to follow. That’s a long roundabout way of me telling you that the sports stories I like the most are frequently those right before when I started taking meticulous mental notes on sports as a young kid. Essentially, sports stories from the 80’s to early 90’s really intrigue me because it’s what occurred right before I became “aware” and often add additional context and meaning to the sports world that I grew up with. It’s like getting to see footage of what was happening at a party in the moments leading up to your arrival and finding out what you missed that everyone is talking about.

The pinnacle of the Detroit Pistons Bad Boys era sat right on that fence of what I knew personally to some degree and what was before my time and hence I was excited to be able to get some more knowledge and insight into the early days of the Bad Boys.

Directed by Zak Levitt (who directed The Dream Team and The Doctor in addition to editing work in The Announcement and Once Brothers) Bad Boys puts together a solid documentary on one of the NBA’s most infamous and divisive teams.

Nothing is really annoying and that includes me just now realizing Kid Rock is the narrator. Credit to Levitt (unintended fun rhyming) for getting great participation from the team, local media, front office personnel, and key rivals.

For many, it will bring back an era in basketball where rivalries boiled for years as the Pistons ascension required the forceful removals of both the Celtics and the Lakers from dynasty status as well as holding down/back the soon to be Bulls dynasty. I know many older than myself romanticize this era in basketball and I imagine seeing the Pistons ups and downs against these teams will have a lot of nostalgic value for those fans.

In terms of why this clocks in more towards the middle of the 30 for 30 series in terms of a ranking, the only thing I can really point to is that while it’s good all the way around, it was very rarely great. The story is interesting and told well, but I never found myself intensely awaiting what would happen next or rewinding to re-watch a pivotal moment, quote, or highlight. Maybe I knew this era better than I thought or perhaps the Bad Boys were just full of personality on the court but were a bit more reserved and mild when reflecting back on their days together.

Looking at the collection of 30 for 30’s and ESPN Films, the two hour films (with commercials) have for the most part been a lot more substantive with layers of backstory, unexpected insights, and new found footage or perspective on past events. With that in mind, Bad Boys is like you ordered a large pizza and while the pizza you got was pretty amazing, you’re not 100% sure they sent you a large and maybe you just got a medium.

That’s not to say I found 2 hours long and the film didn’t hold me, but I’d say lot of films in my totally Top 15 would be the 2 hour variety where new layers were peeled back and my sports knowledge grew a good deal or perhaps I was moved about a story that was foreign to me before watching. If Bad Boys was of the 90 minute variety with commercials or perhaps various narratives about that team were accentuated a bit more, I’d grade it a bit higher.

Ultimately, fans of the Bad Boys and those who enjoyed the NBA’s rise in stature in the 80’s will adore the film and perhaps many who have no real concrete knowledge of the Bad Boys at all will as well. But for those who may find themselves in a similar position as myself (modestly knowledgable but not emotionally attached to that era), Bad Boys will likely be interesting and entertaining but fail to hit that crescendo that makes you suggest it to friends, re-watch later, and discuss with others. Ultimately unless you hate the NBA or the Bad Boys, 2 hours of interesting and entertaining right before the NBA playoffs is probably a safe bet for your time should you find yourself with the luxury of two hours of free time to spend with your couch.