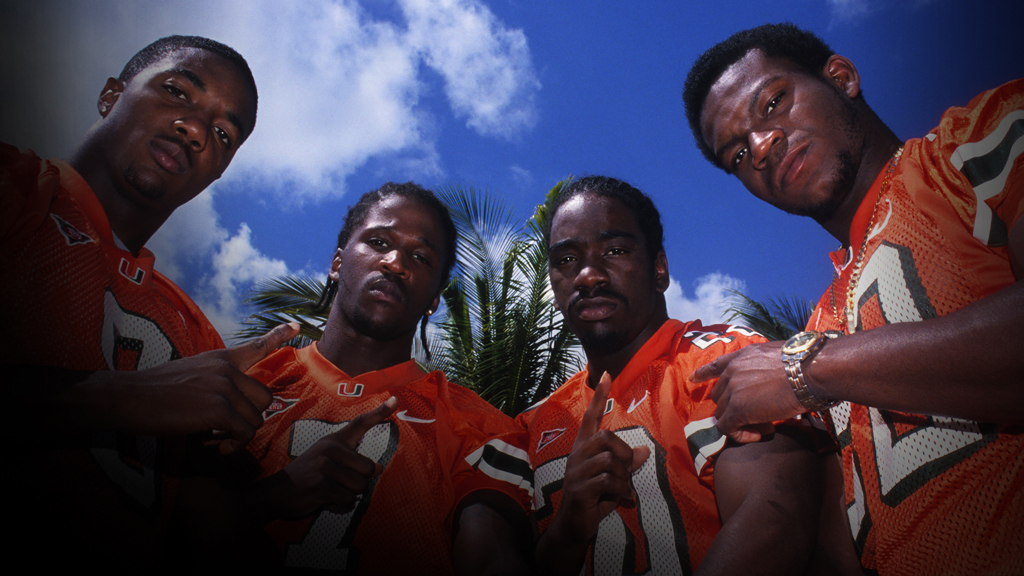 Most Similar To – Bad Boys, The U

Review – Despite having high expectations, Billy Corben’s The U Part 2 closes out a very impressive 2014 of 30 for 30’s on somewhat of a lackluster note, once again proving that sequels are rarely better than the original.

The inability to improve on an original isn’t a new thing for filmmakers and Corben himself as his sequel to Cocaine Cowboys, a gritty and eye opening look at the South Beach cocaine trade, also offered a fairly noticeable drop-off from the original.

Rankings wise, I have The U Part 2 as my lowest rated 30 for 30 for this fall slate of films as well as the lowest released documentary in 2014. The film also breaks the five year streak of having a great 30 for 30 following the Heisman ceremony (past installments have included the original The U, Pony Excess, The Marinovich Project, You Don’t Know Bo, and Youngstown Boys) which guarantees a large built in audience and has typically also guaranteed a higher degree of quality.

For the record in my upcoming 30 for 30 rankings, I have the original The U tentatively slated right around number 20 and I’m usually very kind to the films focusing on college stories. So where does this installment go wrong?

The overall length is the first major culprit and you have to question if that was Corben’s decision or ESPN’s. The post Heisman 30 for 30’s are all 90 minutes or 2 hours, so to some degree I think the sequel was ordered with the length already decided (the original was 2 hours). The original The U was the first in the series to bring in more than 2 million viewers and was one of the better received 30 for 30’s so it’s not hard to see ESPN’s motivation to double down here, but it’s a much less compelling story to fill that window.

The film is broken up into six acts, but at a high level I think you could essentially break this up as four separate 30 for 30 Shorts that would include:

– Butch Davis perseveres through a turbulent time due to NCAA sanctions and changes the culture of the program.

– Miami has a three year period in which they were painfully close to winning three consecutive national championships, but only come away with one. The title team of 2001 is largely considered one of the most talented teams of all time.

– Miami begins to unravel on and off the football field.

– Nevin Shapiro’s booster activity puts the program in grave risk but ultimately the NCAA botches the investigation. With the program in a bad place the circle is now complete and Al Golden must now mirror the turnaround job that Butch Davis did 20 years ago.

While this is all interesting to some degree, I’m not sure this will have much appeal to non-college football fans. What’s most problematic though is that the film really doesn’t add much depth to any of these four mini-eras of Miami football. Corben does a solid job stitching together first person retellings, archival footage, and a lot of newspaper headlines, but it never really goes beyond that. The only new thing I learned from watching this 30 for 30 was that Greg Olsen and other players were in a sexually explicit and (depending on your sense of humor) either a hilarious or overly profane rap track.

I thought potentially we’d get more insight into Shapiro’s dealings given the wealth of storytelling Corben dug up in Cocaine Cowboys but there just isn’t really anything there other than “Shapiro is a dirtbag” and “football players just want to have fun.” Given how big of a bombshell it was when Yahoo Spots dropped that initial story (prostitutes, yachts, strip clubs, an abortion, etc), to really rush through any specifics there seemed a little disingenuous when so many other films in the series have been introspective and investigative of similar scandals.

Maybe it’s that so much of this era of Miami football is fresh in our memories and that it’s not as compelling both on and off the field as the era covered in the original, but ultimately it was very unsatisfying and came off more as a Miami recruiting tool than something for a national audience.

Personally (as a Buckeye alum) I didn’t quibble too much with the sob fest regarding the questionable pass interference call that “cost” Miami a National Championship. If we do indeed label it a bad call (many Buckeye fans will say it should have been holding earlier in the play), it was annoying that no mention was made of another blown call that proceeded the infamous pass interference call that occurred with 2 minutes left in regulation that would have rendered overtime unnecessary (with no instant replay, a completion along the sidelines was incorrectly ruled out of bounds and forced a punt that led to a Miami tying FG on the last play of the game).  I only go on this tangent because the film closes by saying Miami won 6 National Championships over a period of time and then a whistle is blown, a flag is thrown into the frame, and then the number 6 is crossed out and a 5 appears. Oh snap!!!

While the original did feel at times like a vanity or branding project for Miami, it was entertaining, quick paced, and packed to the brim with memorable stories. Sadly this sequel felt even more like a Miami branding exercise, but this time with very little introspection, much slower, and covering a much less dynamic and less turbulent time for the program. You essentially spend a large portion of the film waiting for the film to kick into gear and sadly the speed that Miami is known for from a football perspective never enters into the storytelling.  I imagine many will be left wondering if the sequel was necessary.

Ultimately where The U Part 2 gets it wrong the most (and there are several areas you could point to) is that this was conceived and motivated on double dipping the iconic and polarizing Miami brand with the knowledge that ratings wise, this would be a high percentage bet. Unfortunately though, and evidenced many times over, there often isn’t enough substance or enthusiasm to force a sequel. Sadly, that seems to be the case here as the drop-off in entertainment, storytelling, and cinematic quality between the original and the sequel was much more stark that I would have imagined going in.