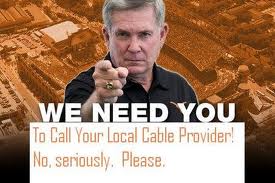 Update: in what must be one of the worst timed posts ever and worst ways to start a weekend, Time Warner customers in Texas will now be getting the channel in start of the season. Obviously I'm surprised, shocked, and feeling like an idiot now. This post will remain up to shame me going forward but we'll remove it from the front page given how things have changed since it's publishing.

Earlier this week, I published a piece on the where things stand between DirecTV and Pac 12 Networks. This led to some inquires on how things are going for the Longhorn Network. In the past, I've enjoyed poking fun at the state of affairs of ESPN's Longhorn Network. Now heading into year three, no need to beat a dead horse. The screenshot below is suffice:

But just in case you want the layers of bullshit peeled off of the PR on the stalemate, here is a hastily made FAQ for the 15 Texas fans who read this site…

If I don't currently have the Longhorn Network, will my provider be adding it soon?

Because it's an audacious concept that pissed off pretty much everyone. You can't build a network around a couple shitty football games and a team that has been around .500 the last couple of years.

Should I call my cable or satellite provider to complain?

If you're lonely and want someone to talk to, sure. They don't care.

I thought ESPN's backing would help get me this channel. What gives?

For decades ESPN has steam rolled cable/sat companies. For once the cards are not in their favor. They have a busted straight draw and the whole table knows it. ESPN is bleeding money on the partnership and doesn't have a card to play to get things fixed.

Is there any hope of the network getting over the hump?

A little. As Disney reaches extensions for ESPN and their other channels with the big dogs (Time Warner, Dish next month, DTV, and Comcast), it's possible Longhorn Network distribution might be a part of a larger extension agreement. That said, if Dish puts Longhorn Network off the table in their upcoming extension, I'd imagine that will be something that the other big companies will look to do as well. That would be the beginning of the end imo.

So what does the future hold here if things remain the same?

Texas, although embarrassed, is getting paid and their fans have long since accepted the state of affairs with the network. They've got bigger fish to fry, like potentially pushing out Mack Brown if this year is another dicey one for the program. Brown's contract is massive and it will cost a lot of money to buy him out or honor the contract and recruit a top tier coach. With that in mind, it's possible ESPN may look to utilize any out clauses that are in their contract to get out early or perhaps come up with a payoff amount that allows them to exit the joint venture with UT. Essentially it's not crazy to see a scenario where ESPN writes a big check to the university, who then writes a big check to Brown to go away. Texas gets a new coach and can strike a new deal for their third tier rights that actually allows them to be seen on television. Everyone wins… except for Disney stockholders and the person who thought this was a good idea.

Can you embed one of those AWESOME Matthew McConaughey teasers?

Sure. No reason for you to go home empty handed. Here he is!