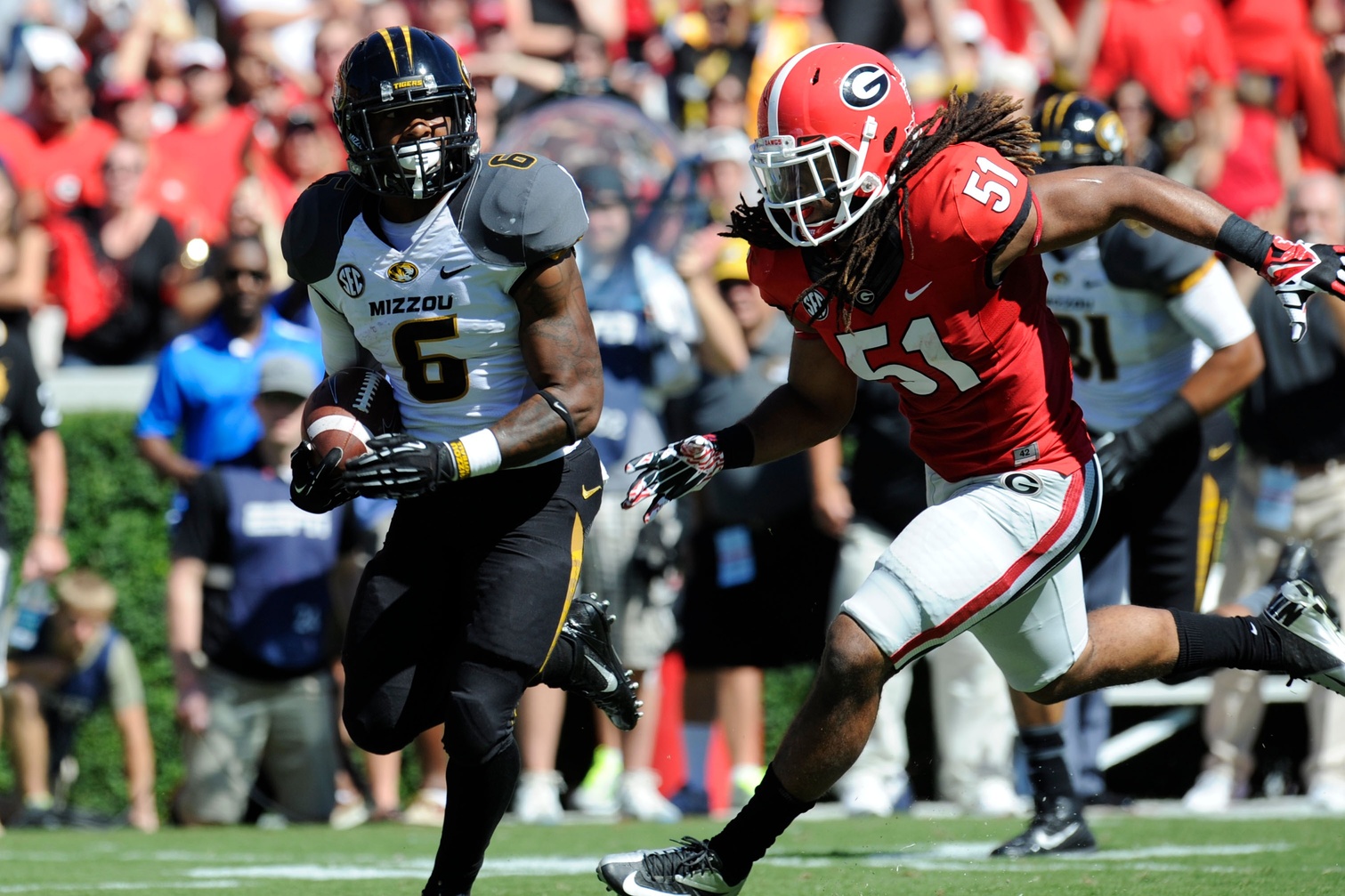 Looking over this week's college football schedule, there are several compelling matchups.  In fact, there are four games between ranked teams.

Of those four matchups, three will be broadcast on national television.  Auburn/A&M play at 3:30 on CBS, UCLA/Stanford at the same time on ABC/ESPN2, and FSU/Clemson is the ABC Saturday primetime game.

But what about the fourth?  Florida playing at SEC East leader Missouri coming off their biggest conference victory at Georgia.  Well, it's being relegated to ESPN3 and ESPN Gameplan at noon.

The SEC regional TV game goes to a good portion of the country, and many may be able to watch on ESPN3 or Gameplan, but it's not the same as a national telecast on ESPN.  How could a Top 25 matchup be off the radar this late in the season?

First of all, SEC games are picked by CBS and ESPN for their broadcast windows two weeks ahead of time.  It was on October 7th when CBS picked Georgia-Vanderbilt and Texas A&M-Auburn for their doubleheader on October 19th.  At the time, the prospects of Missouri going on the road and defeating Georgia looked pretty slim, even despite all the injuries facing the Dawgs.

For their primetime SEC package, ESPN selected Arkansas-Alabama for ESPN and LSU-Ole Miss for ESPN2.  Again, the reasoning for picking those games ahead of a potential Missouri-Florida clash are pretty clear considering Alabama is the #1 team in the country and LSU is placed in the Top 10 and still a national title contender.  The noon ESPN SEC game features another Top 15 team this week and one of the SEC's biggest fanbases matching up with South Carolina at Tennessee.

Therefore, before Missouri beat Georgia when network selections were made, their matchup with Florida was just one of five or six games of consequence in the SEC this week.  Furthermore, ESPN couldn't have predicted it would carry the same weight it does today.  With the depth of the SEC (featuring a record 8 teams in the Top 25 for the first time in history this week) seeing a Top 25 matchup on SEC regional television is never out of the realm of possibility.

But there's another element at play – Missouri doesn't bring ratings when compared to traditional SEC powers.

Jon Solomon has a very interesting article at AL.com on why CBS passed on Mizzou both for this weekend's slate and more importantly, next weekend when Mizzou plays South Carolina.  That could be a potential matchup for the top spot in the SEC East once again if the Tigers beat the Gators at home this weekend.  Instead, CBS went with the traditional rivalry game between Alabama and Tennessee, even though it may be a non-competitive affair:

Airing Missouri-South Carolina next week would have carried a risk CBS usually doesn't take. Forty-seven of the past 50 SEC regular-season games on CBS involved at least one of the SEC's traditional powers (Alabama, Auburn, Florida, Georgia, LSU and Tennessee).

Missouri was on CBS twice last year, drawing a 2.1 in its 32-point loss to Alabama and a 2.5 in its 21-point loss to South Carolina. The Missouri ratings were discussed "no more than any other factor we talked about," Weinberg said. "Obviously a closer game is on some level a game that has more appeal just because there's more drama than a blowout."

This is an untold factor in college realignment – SEC fans need more time to embrace schools like Missouri and Texas A&M.  In fact, fans around the country need more time to embrace Missouri as a potential factor in the upper echelon of the SEC.  There isn't the tradition and history present in Missouri-South Carolina as there is in Alabama-Tennessee or even a matchup like LSU-Ole Miss.

College football is as much about what's happened in past generations as it is what's happening this year.  It's going to take an incredible run of form over several years for a matchup between Missouri and any SEC school to reach the national and regional cachet of Tennessee-Georgia, Alabama-Auburn, or LSU-Florida.  No sport values tradition more than college football and right now Missouri competing for a berth in the SEC title game doesn't compute in the world we've known for the last several decades.