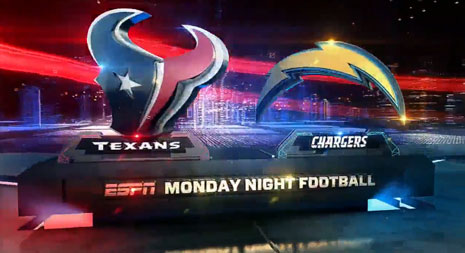 NFL football kicks ass. We all agree, right? And while Sundays are wonderful, nothing beats prime-time NFL football. The games simply feel more special when they're isolated like that. In those situations, we all take to Twitter to share our amateur jokes at the expense of whichever team or player is struggling while making grand, exaggerated statements about those experiencing success.

And every year in Week 1, we get an extra serving of prime-time, nationally-televised football when ESPN turns Monday Night Football into a doubleheader. Football from 7 p.m. until 1 a.m. ET is just glorious, which has me wondering why that hasn't become a weekly staple yet.

It makes sense for everyone. You'd only be stealing a total of a handful of games away from CBS and FOX, but another permanent prime-time national spot would give teams and players more exposure while giving fans more football to watch and adding to the league's profit margin. Because I can guarantee ESPN (or anyone) would be willing to pay big bucks for the extra 15 games (they'd be much more valuable Monday night than Sunday afternoon).

For those who say it'll force the early game to start too early, consider that 7 p.m. ET is when the majority of NHL, NBA and MLB games begin. And consider, too, that Monday's Eagles-Redskins game dominated in the ratings despite the early kickoff. For those who say it'll force the late game to start too late, consider how well things have gone for the NBA on TNT on Thursday nights.

Here's the biggest issue with that late start: Only four NFL teams — Seattle, Oakland, San Francisco and San Diego — are located in the pacific time zone, and only two — Arizona and Denver — are based in the mountain time zone. So either you cycle six home teams three times each, which isn't very realistic, or you force teams based in the central time zone — Minnesota, Kansas City, Dallas, Houston, Green Bay, Chicago, St. Louis, New Orleans, Indianapolis and Tennessee — to kick off a home game after 9 p.m. ET.

That's not necessarily an issue when you consider that Monday Night Football used to kick off at 9 p.m. every week, but it makes things difficult on the schedule makers when only about half of the league's teams can host in that spot.

I think that's something the league can overcome, though, making Mondays extra special throughout the fall.

What do you guys think?