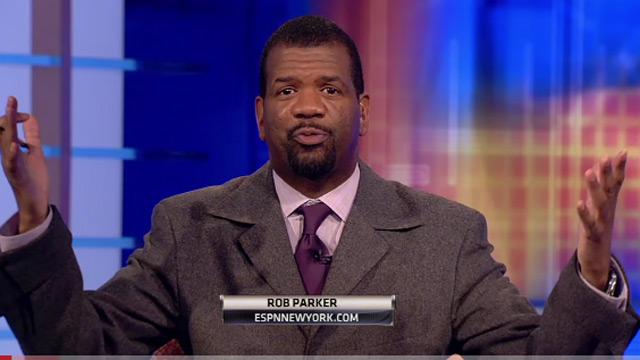 Suspended ESPNer Rob Parker is almost near the conclusion of his 30 day suspension for asking whether or not Redskins QB Robert Griffin III was a "cornball brother."

In a hometown interview with WDIV's Flashpoint (Parker has also written for WDIV's website, clickondetroit.com), Parker spoke publicly for the first time since the suspension with Devin Scillian Sunday morning.  In the interview, Parker continued to dig a deeper hole around his comments questioning Robert Griffin III.  You can watch the entire Parker interview at clickondetroit.com (the segment begins at the 2:45 mark), but here are the highlighted quotes from Parker:

Q: I know it has been a whirlwind of a month for you, can you believe where this all went?

Parker: "No, I can't believe it, looking back on some of the comments I can see where people would take it out of context with it and run with it, but the response and what happened over the past 30 days and everything was just shocking."

Q: Do you wish you hadn't said this or wish you said it differently?

Parker: "It was never to condemn the young man, RGIII is a great young man with a bright future.  It was more about concerns, not condemning him."

(On his quotes delivering a bit of "truth serum"…)

Parker: "It was just a conversation that's had in the black community when athletes or famous entertainers or whatever push away from their people and that's really what it's about.  You saw with O.J. Simpson and some other people when they say, 'well I'm not black I'm O.J.' so it's more about that, not about RGIII and what's going on, it's more about this thing that we've battled for years on why people have pushed away."

Parker: "The people and the producers and everybody on the show, we just didn't think of it that way.  We weren't trying to slam the kid, we were trying to be able to tackle these issues.  The one thing I'm proud about being on that show, First Take, for the last six years is that we are willing to tackle a lot of stuff that most shows won't even touch or even discuss.  I think it's important, I think we've done it in a really good way, but you know this is the first time we've been in hot water over dealing with such an issue."

Q: These shows often look very off-the-cuff, but you guys go through a lot of prep work on all these shows.  Didn't everybody on the program know what you were going to say?

Parker: "We had a discussion inside, a pre-production meeting.  Not every single word, but they knew which way we were going.  It's just not off-the-cuff, obviously."

It's incredible how little responsibility Parker takes for his own commentary.  Let's watch the video again and see if the Vaudeville debate panelist was taken out of context or not…

Parker said: "My question, which is just a straight honest question – is he a brother or is he a cornball brother?"

How could Parker say Sunday that he didn't question whether RGIII was black enough?  It's right there in the video tape.  How could Parker believe that was taken out of context in the slightest?  Furthermore, how could Parker think that implicating RGIII pushing away from the black community is going to make this situation better for him?  If anything, the major takeaway from this Detroit interview is that Rob Parker hasn't really learned anything from his suspension.  Surprise, surprise.

Also, it's clear from Parker's comments and ESPN's actions in suspending unnamed individuals behind the scenes that First Take producers were in on this sham from the beginning.  Ever so slightly, Parker has pulled the curtain back on the "authentic" debate that takes place on First Take.  Of course Parker's controversial comments weren't off-the-cuff, that's why they were aired in the first place.  That's why Skip Bayless asked that bizarre question about RGIII's braids.  That's why Parker's "cornball brother" question was re-aired.  That's why ESPN had to publicly shame First Take with "increased editorial oversight" for their staged debate show.

When Parker returns to the airwaves, we'll see if that holds firm.  I'm having my doubts.