When news broke of an Aaron Hernandez prison letter, something caught my eye. It had nothing to do with the story or the letter but the fact that the letter in question didn't have the normal TMZ logo on it and instead a specific TMZ Sports logo that I'd never seen before.

TMZ covering sports is nothing new as they seem to have a handful of scoops of a month, but the specific branding was new and piqued my interest as TMZ made quite a bit of noise in 2009 and 2010 about ramping up a brand extension in the sports vertical, but eventually decided to have all content remain under the main TMZ umbrella.

As Matt noted in a recent column, times have changed and it seems that TMZ has opted to take the TMZ Sports brand extension concept off of the shelf and invest resources in building it up again.

A quick investigation tells us this:

– Almost all stories on TMZ related to sports have a big ad unit promoting hiring for TMZ Sports that take you to this page.

– The press release on the Hernandez story specifically asked "Online and On TV **Please feel free to use the story below with proper link and credit TMZSports.com**"

– TMZsports.com currently is just a vanity url that redirects to a tmz.com category tag page for sports. However all posts with that tag have a TMZ Sports branding background and banner.

– All posts follow the normal TMZ m.o of having all content attributed to "TMZ Staff" because there is probably some level of safety in anonymity.

– I am told that they are looking to make hires in New York, LA, and Miami, basically following the precedent of top NBA free agents.

I'm sure many of you are interested in why I'm sinking my teeth into this given TMZ covering sports is not exactly a new thing. The answer is that their initial planned foray into sports was a much ballyhooed topic and while nothing materialized, this second attempt seems to have fallen completely under the radar. Rewinding back to late 2009, here is just a sampling of the coverage surrounding TMZ's intentions to get into sports:

Sports By Brooks – Hide The Baby Mamas! TMZSports.com Is Coming

Deadspin- TMZ Sports: Prepare For The Next Great "Tabloid War" Or Something

TMZ would even go as far as buying ads on Deadspin.

From there, the trail goes cold. More than a year later, we got this update from the New York Post.

"Despite his success inside the Hollywood bubble, TMZ founder Harvey Levin has been having trouble trying to branch out beyond its comfort zone. He had plans to launch TMZDC covering Washington DC and had also started hiring sports writers and editors with the plan of doing TMZ sports. Both plans fizzled."

Nobody really knew what exactly happened but Darren Rovell offered up this questionable explanation.

NY Post: TMZ's plans for a sports web site have "fizzled." Not enough dirt on players people are interested in (via @sbjsbd)

That makes TOTAL sense given the total lack of interest in Riley Cooper's recent adventures. The Classical would go on to pen an article "At Least There's No TMZ Sports", a premature celebration that the concept never got off the ground.

"There is the broadly good recognition that this could never have worked. It's not just that it's too dumb, although it is that. It's that there's no life in it, none of the offhand love that is the central ingredient in being a fan. It's just uncut and uncurated prurience, all tearing down without any sense of considering (let alone consideration for) the things that have, rightly or wrongly, been built up. We're all better off without TMZ Sports, of course."

So what's changed in the last couple years to lead a second charge of TMZ Sports? These 3 factors led TMZ to going down this road again:

1) Think back 3 plus years ago. How many people had video recording capabilities on their phones? You probably did, but did your Mom, Dad, and most technologically impaired friend? How about now? The amount of people who can provide TMZ with content has gone way way up in a short matter of time.

2) TMZ's parent company, AOL, was getting their shit kicked in back then and was cutting costs anywhere it could. A lot of new AOL ventures were facing cutbacks and capital was being put aside for acquisitions like TechCrunch and the Huffington Post. Since then, the online advertising market has rebounded nicely as has AOL's stock price which is up about 75% since.

3) TMZ did some solid reporting around the Te'o story. I'm guessing they saw a ton of traffic that made them revisit the potential of TMZ Sports. 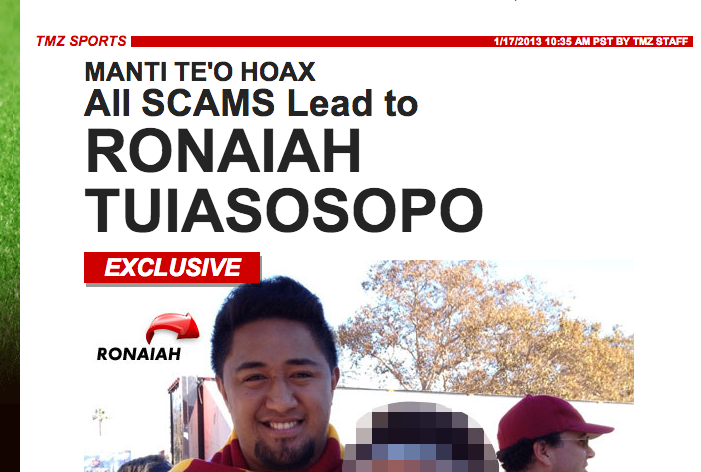 So here we are again with TMZ looking to make a bigger splash in the sports vertical. Part of me welcomes them again, they have broken a significant amount of stories over the past couple of years as just a content category of TMZ.

But the flip side is that they create stories by hounding people. Staking out major airports, waiting outside of bars and restaurants, digging through public records, etc. Basically being TMZ. I've seen way way too many stories that weren't really anything and I'll bite my tongue rifling through a lot of the stuff that I've rolled my eyes at. Sometimes tabloid sports can be as silly and pointless as any other tabloid endeavor.

At the end of the day, I like sports, as in actual athletic competition with a score and a winner and loser. Almost all of my consumption of "sports media" pertains to live games or storytelling like 30 for 30, Real Sports, Hard Knocks, and 60 Minutes Sports. But if you look around the space, most of the buzz (especially in the summer) is focused around all of the stuff off the field. Infidelity, scandal, criminal activity, contracts, litigation, etc, etc, has over time surpassed actual conversation about sports online, on television, at the bar, and at the water cooler.

Every media company has adjusted accordingly for the most part and where TMZ was weary before, they're now brimming with confidence. While I probably won't be a regular, I'm sure they'll draw me in from time to time and that they'll be quite successful given the growing appetite of interest in off field scandal and hijinks.