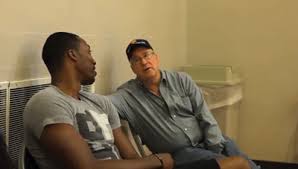 T.J. Simers May Find Himself Unemployed Due To The Now-Infamous Dwight Howard Free Throw Shooting Video

Ask a sports fan in Los Angeles their thoughts on Los Angeles Times columnist TJ Simers and you're likely to get a strongly formed opinion one way or the other. Simers is the classic long-tenured, old-school, pull-no-punches, love 'em or hate 'em print columnist who now finds himself in what amounts to paid suspension purgatory.

Our friend Larry Brown reported on Simers' conspicuous absence on Friday, noting it's been six weeks since the paper's most well-known writer has appeared in the Times. LBS also notes that the paid suspension "vacation" came in the wake of a viral video featuring Simers, Dwight Howard, and Simers' daughter. That video was produced by Mandalay Sports Entertainment, who would subsequently announce their plans to base a sitcom around the Simers family a week after the video was released.

Since then, it's been crickets – although, after being peppered by inquires on Simers' absence, the sports department added a note that he was on vacation… a now-six-week vacation.

We've been tracking this story for a while. A source tells AA while the involvement with Mandalay is the issue in question, the motivation to potentially part ways with Simers dates back several years.

Early on, Simers labeled McCourt the "Boston Parking Lot Attendant," a reference to McCourt's early days in real estate when he acquired property in South Boston and developed it into parking lots.

Simers' rough treatment increased as McCourt's troubles mounted and Hartenstein eventually stepped in, asking that any reference to McCourt first be cleared with senior editors. Although the edict was newspaper-wide, it is said to have been primarily aimed at Simers.

Since McCourt's exit from the LA sports scene, Simers and management have largely avoided conflict despite little or no progress being made to repair the working relationship or find common ground on the columnist's writing style and subject matter.

The release of the Howard video was an obvious move to seed the web with buzz around Simers and his daughter in preparation for finding a home for the proposed sitcom. The video also gave Times management an opportunity to explore a potential exit for Simers from the paper.

Simers has a contract and we're unsure if the production and promotion of the viral video for another media company is a firable offense. We're guessing that Times management was also unsure and opted to conduct a legal review of the situation to see if a termination would hold up. Typically any wrongful termination suit,  which is potentially where the two parties are headed, is settled out of court in conjunction with a non-disclosure agreement.

According to the source, Simers did visit the office for a meeting with Maharaj early on in the suspension that did not go well. In fact, Simers left the meeting believing that he would need legal representation. At that point we were told his likelihood of coming back to the Times was less than 50% and has probably gone down.

There is another meeting scheduled for this upcoming week where Simers will likely learn his fate.

Upon reaching out for comment from the Times, we received this not-so-insightful note:

"Please know that our policy is not to comment on employees, but we do want you to be aware T.J. Simers is still at The Times."

The decision on whether T.J. Simers remains with the Times will ultimately be up to Hartenstein, Maharaj and the internal legal review, as we're told the editors within the sports department have either been completely removed from the situation or have declined to get involved.

While the viral video and aspirations of a sitcom definitely pose a possible conflict of interest, I'm not sure that without any other instances of documentable negligence or poor performance, there is enough meat on the bone to terminate Simers. That said, typically when a large company has paid an employee for a lengthy suspension, invested in legal and HR resources to investigate the feasibility of a termination, and are okay stomaching a potential PR hit, there is usually too much momentum to reverse course.

For fans and detractors of Simers, it appears there will be closure to the situation by the end of the week. In the end, we may have to add this as yet another bullet point to the failed Dwight Howard experiment in LA.