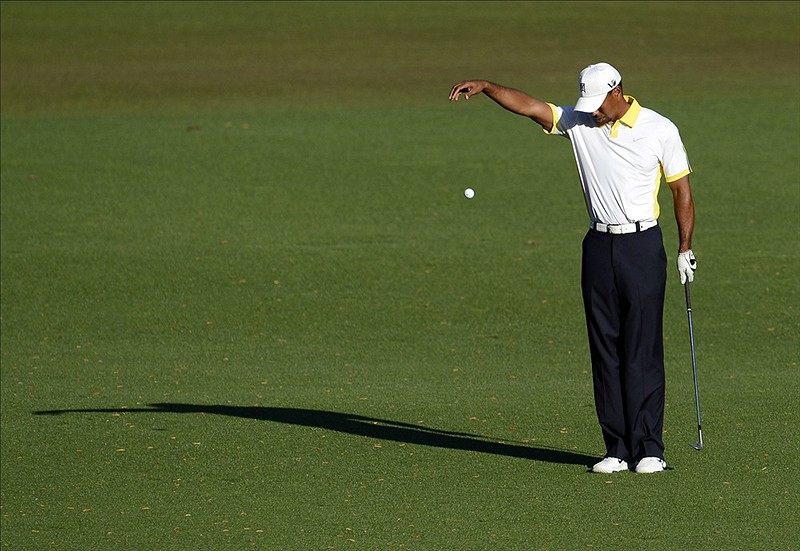 The roaring feud between Tiger Woods and Golf Channel's Brandel Chamblee took a few turns this week as their rivalry has become the biggest story in the game.  As a refresher, it all started when Chamblee dished out his season ending grades and gave the PGA Tour Player of the Year an F because of a few questionable rules situations.  Chamblee wrote Woods was "cavalier with the rules" and in turn was threatened with a lawsuit by Woods' agent Mark Steinberg.  Chamblee eventually issued an apology on Twitter and that appeared to be the end of things.

Golf is a gentleman's game and I'm not proud of this debate. I want to apologize to Tiger for this incited discourse.

The feud continued this week as Woods himself stepped to the plate to keep the heat on Chamblee.  Once Woods and his camp realized threats of a lawsuit were frivolous, Tiger turned to pressuring Chamblee's main employer, Golf Channel, to do something about the matter.  Who knows what that something was – fire Chamblee?  Put him in the stocks in the middle of Orlando's town square?  Perhaps only Tiger knows…

"All I am going to say is that I know I am going forward," Woods said before his exhibition match with Rory McIlroy at Mission Hills. "But then, I don't know what the Golf Channel is going to do or not. But then that's up to them. The whole issue has been very disappointing, as he didn't really apologize and he sort of reignited the whole situation.

"So the ball really is in the court of the Golf Channel and what they are prepared to do."

This was a sly move from Tiger Woods, but one that absolutely reeks of bullying tactics by him and his handlers.  If Tiger was really "going forward" then why would he call out Golf Channel?  Why would he refuse to acknowledge Chamblee's apology on Twitter?  Why would he insinuate that Golf Channel had to do something to discipline and punish Chamblee?  The article in question didn't even appear on Golf Channel, it was an article Chamblee wrote for Golf.com and Golf Magazine.  Why then turn to Chamblee's main employer if not to try to strongarm them into suspending or even firing one of their lead analysts?

But that wasn't all, playing companion Rory McIlroy butted in with more cryptic foreboding towards Golf Channel and Chamblee via the UK Daily Mail:

'I say Brandel was completely wrong and I don't think he has the authority to say anything bad about Tiger,' said McIlroy. 'People wouldn't know who Brandel was if it wasn't for Tiger, so I am completely against what he said and he should be dealt with in the right way.'

What is this, a poorly written mob movie?  "Dealt with the right way?"  C'mon, is Rory McIlroy going to put a horse's head in Brandel Chamblee's bed?

And the comment that "people wouldn't know Chamblee without Tiger" is out of bounds.  Chamblee is paid to be a golf analyst and have an opinion.  Just because he didn't win x amount of majors doesn't mean he's not qualified to talk about the game on television.  It's ludicrous to think that Chamblee has a job to serve Woods, McIlroy, or any other professional golfer that might have thin skin.  He's there to serve viewers, whether Woods and McIlroy are there or not.

After being called out publicly, it was only a matter of time before this controversy was addressed on Golf Channel airwaves, again, even though they had nothing to do with this story.  Chamblee admitted that he "went too far" in comparing Woods' actions with his own cheating episode and also said that he would give up his Golf.com writing to work solely for NBC and Golf Channel:

Will that pound of flesh in Chamblee resigning from Golf.com satisfy Tiger's camp and their thirst for vengeance?  Who knows.  This story never should have gotten to that point, anyway.

Did Chamblee cross the line in his original column about Woods by linking him with a grade school cheating episode and saying he was "cavalier with the rules"?  Possibly.  Was it something worth apologizing for?  Perhaps.  Should the story have ended there?  Absolutely.

Once Tiger Woods and his camp started threatening lawsuits and putting their foot on the throat of the Golf Channel they became the bully instead of the victim.  When players start beckoning for the jobs of analysts who criticize them, and the outlets cave into that pressure in any way, the media who are paid to cover the sport objectively are thrown into dangerous, uncertain waters.

The ball should have never been in Golf Channel's court, but once Woods and his handlers saw an opportunity to attack the credibility of one of their most outspoken critics, they threw everything they could at Chamblee and his main employer.  Moreover, Woods knows exactly the kind of power he has in the golfing world, especially when it comes to the media.  He's more powerful than any other athlete in any other sport.  Being an ally of Woods can be very beneficial for your career in a media world that's built on access and relationships and staying in his good graces.

For Woods to use that kind of power to force a network or outlet into action sets a troubling precedent.  What happens the next time someone publishes something or says something on the air that's not to the liking of Tiger Woods?  Will they be forced to apologize?  Be threatened with a lawsuit?  Suspended?  Have to resign?  Where is the line being drawn for those in the golf media who are paid to give an opinion and cover the sport?

If this episode weakens Chamblee's outspokenness or causes others in golf media to be even more fearful of criticizing Woods out of fear for their own jobs, it is a troubling course for the sport to take.