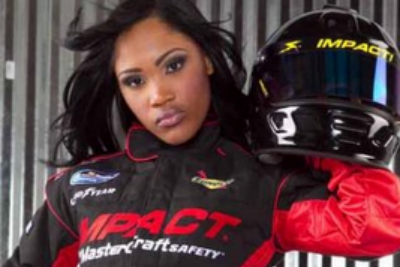 Only two months after the Manti Te'o saga provided a compelling example of how big media outlets can be suckered by a false story, another case has shown up that may reflect even more poorly on the sports media. That would be the case of Tia Norfleet, who's been profiled for years everywhere from ESPNw to The Washington Post to FanHouse/The Sporting News to The Huffington Post, often in such glowing terms as "the only black woman to be licensed by NASCAR."

The problem? As Viv Bernstein wrote in The New York Times last Wednesday, Norfleet's record comes nowhere close to what she's claimed; she has not been approved by NASCAR, only has a license to compete at the lowest level of stock-car racing (which doesn't come with a vetting process), and has only entered one low-level sanctioned race (where she completed a grand total of one lap). She also reportedly has a criminal record in Virginia and Georgia for assault and drug-related offenses.

What's remarkable is that the story hasn't received much traction yet (a Google News search for "Tia Norfleet" Monday found four pieces commenting on the debunking of her claims: the initial NYT piece, Yahoo!'s NASCAR blog, The Atlanta Black Star and SheKnows.com). It wasn't even widely noticed in sports circles until Bernstein wrote about it on her blog Monday. None of the outlets involved seem to have admitted the problems with their coverage of Norfleet yet. If the NYT's reporting (from Bernstein, Ray Glier and Jack Styczynski) is accurate, every outlet that's covered Norfleet has substantial questions to answer, and they may have failed even more from a journalistic standpoint than they did in the Te'o case (although these glowing Norfleet articles were published well before the Lennay Kekua hoax). So far, though, we've seen none of the corrections and mea culpas that accompanied the coverage of the Te'o saga.

What makes the Norfleet story arguably worse for these outlets than the Te'o case? Well, with Te'o, the false parts (everything about "Lennay Kekua") weren't the core of the story. Te'o was worth coverage in his own right for his on-field play; outlet after outlet added the Kekua story to their Te'o coverage, but it was extra detail, not the reason he was worth writing about.

With Norfleet, though, the information at question is the entire reason for the story; there would be little to no reason for national publications to write about her at all with her actual record. Also, information on her racing record should have been much easier to check than information on a football player's girlfriend. According to the NYT piece, Norfleet systematically misrepresented herself and what she'd accomplished, earning tons of glowing national profiles in the process, and those outlets haven't even bothered to correct the record yet. Seeing so many prominent media outlets get rolled on an entire story (rather than an angle to a story) is incredibly concerning.

Let's point out a few sections from those Norfleet pieces that appear to have significant problems in light of Bernstein's reporting.

"On Aug. 4, Tia, 24, became the first African-American woman to race in NASCAR. She placed 23rd out of 25 competitors at the CMC Supply Twin 100s at Motor Mile Speedway in Fairlawn, Va. Turns out, the little girl who drove a souped-up Hot Wheels convertible hot rod until the wheels fell off is now pushing speeds of up to 200 mph in NASCAR's late-model K&N Pro Series."
– Adena Andrews, ESPNw, Aug. 11, 2012

That appears to be the single low-level race Bernstein mentions, and it's notable that Andrews doesn't point out finishing 23rd out of 25 is equivalent to completing one lap. A driver quoted in that race remarked to the NYT that drivers stayed off the track during practice because she was dangerously slow. Norfleet was hardly "pushing speeds of up to 200 mph."

" Norfleet is 23, female and African American. Some time this season, she hopes to become the first to start a NASCAR race, and she knows exactly what that will mean. … The best part about their story? NASCAR and the racing hierarchy couldn’t be happier."
– David Steele, AOL FanHouse (now The Sporting News), May 11, 2011

Norfleet's age is in dispute, she did not start a NASCAR race that season, and it's notable that there are no comments from NASCAR specifically about Norfleet in Steele's piece.The discussion on their end is about broader initiatives for driver diversity.

"Daughter of race car legend Bobby Norfleet, the 25-year-old has been racing since she was a kid, and she is the only black woman to be licensed by NASCAR. … She competes under her dad’s old number, 34, and finished her first race under NASCAR in August."
– Erin Williams, The Washington Post's The Root DC Live blog, October 11, 2011

Age discrepancies again show up here (this is the same year Steele calls her 23, and a year before Andrews says she's 24), "licensed by NASCAR" is extremely problematic given that NASCAR doesn't vet licenses at that low of a level, and "finished her first race under NASCAR" is also a big issue, again, seeing as how she only completed one lap of actual racing. It's a substantial overstating of her on-track accomplishments, at best.

"She has been successful at drag racing and on the shorter tracks circuit known as the NASCAR late models, where she recorded two top-15 finishes."
– Jordan Schultz, The Huffington Post, May 20,2011

That seems questionable. Perhaps Norfleet did record two top-15 finishes at some level, but they don't seem to be in anything authorized by NASCAR. (To his credit, though, Schultz does reach out to NASCAR managing director of corporate communications Ramsey Poston, and Poston's comments about Norfleet, while guarded, certainly don't poke holes in her story.)

Amazingly, the outlet with the least to correct here might be Bleacher Report. "Yes, the best way to raise awareness about this tremendous story is to get you some pics to ogle." That sentence may make intelligent readers wish to set themselves on fire, but it's a little tougher to poke factual holes in that. The title, "Tia Norfleet Is NASCAR's Only African American Female Driver… and She's Hot," is more under debate, though; readers can decide for themselves if Norfleet is attractive, but calling her "NASCAR's Only African (missing hyphen!) American Female Driver" seems like a stretch when she isn't licensed by NASCAR.

Really, none of the media outlets who profiled Norfleet look very good here. At the very, very best they've dramatically overstated what Norfleet's actually accomplished on the track for the sake of a better profile. At the worst, they were completely suckered by a publicity-hungry con artist who rolled media outlets everywhere.

Again, what's critically wrong here is the very core of these stories; if Norfleet has not been approved by NASCAR and is nowhere close to even making an impact at the lowest levels of stock-car racing, these profiles should never have been written (or at least, should have been written with a lot more qualifications and skepticism).

It's going to be interesting to see how the outlets that profiled Norfleet respond, but the lack of response so far is quite concerning. These stories making it into publications also extremely troubling. One of the key takeaways from the Te'o and Lance Armstrong sagas was that "substantial evidence doesn't always make it real," but  in Norfleet's case, there seems to have been next to no evidence whatsoever.

If the NYT's reporting is correct, plenty of major media outlets neglected to check verifiable facts about an athletic career, instead running with what the athlete said. That's happened before (NFL Films' Steve Sabol famously pulled off a similar stunt during his playing days), but it's extremely troubling. If the Te'o case was an example that media outlets love crazy biographical details that add to a sports story, the Norfleet case suggests you don't even necessarily need a real story in the first place. That should be much more worrying.