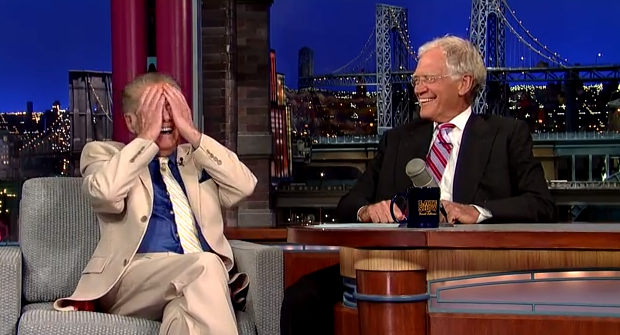 Ah yes, it's that most wonderful time of the year – the time to look back on all the best gaffes, blunders, screw-ups, and all around funny moments of 2013 with the top broadcasting bloopers of the year.  Since we've somehow made it as a website for another year, the list of broadcast bloopers is bigger and better than ever before with 13 clips for your enjoyment.

New York Mets pitcher Matt Harvey is the only current athlete to make our list. He went on The Dan Patrick Show in September for what was supposed to be a normal, everyday interview. What transpired was the most passionate and bizarre product pitch in recent memory. Harvey blocked DP's questions about his arm injury and instead insisted "today's about Qualcomm" because that's what is really important. Qualcomm. It's always about Qualcomm. Just wait until Qualcomm is named next MLB commissioner.

There was about a week this winter when the Blackhawks and Heat were on concurrent streaks that SportsCenter produced its worst episodes in its three decade plus history with insipid debate about which team, streak, and sport was better.  SportsCenter sent resident blusterer Stephen A. Smith on the air to try and diss the Blackhawks points streak to predictably disastrous results. He spent an entire minute ranting on ties in hockey, which haven't existed since 2004.

Fox Football Daily features commercial cut-ins that are becoming more and more popular across sports television. Someone forgot to tell Terry Bradshaw that this profane conversation with Jimmy Johnson would have a chance to be aired to the masses, or however many people watch Fox Sports 1. TMI, Terry. Always, TMI.

9) Regis Philbin forgets who he works with

It's still hard to believe Regis Philbin hosts what may be the single most random sports show in existence in 2013, Crowd Goes Wild. During a summer promotional tour for his new Fox Sports 1 show, Regis Philbin stopped by David Letterman's show and totally blanked on who his co-hosts were. I'm actually disappointed Regis Philbin Forgets His Co-Hosts' Names isn't a regular segment on CGW alongside the excellent This Week in Punting.

It wouldn't be a year-end blooper list without the legendary radio voice of the Yankees, John Sterling. Here he is describing… heck, I don't know what it is he's trying to describe. Just listen and marvel at its wonder.

7) Doug Gottlieb is here to bring the white man's perspective

6) The most costly Freudian slip ever

Blackhawks reporter Susannah Collins made a simple slip of the tongue when she said the Blackhawks had a "tremendous amount of sex" instead of "success." Usually one Freudian slip wouldn't be enough to make the year-end countdown of broadcast bloopers, but the story didn't end there. Unfortunately, the viral nature of the clip cost Collins her job at CSN Chicago when executives became aware of a series of bawdy YouTube videos deep in her past.

Susannah Collins wasn't the only broadcaster to lose a job thanks to a notable gaffe. Veteran racing announcer Marty Reid was let go by ESPN after he botched the finish to the Nationwide Series race at Kentucky. It's incredibly rare to see an announcer fired for a mistake in the booth, but this wasn't Reid's first high profile blunder. (Go here for better video quality.)

One of the most memorable plays of this year's World Series was Koji Uehara picking Kolten Wong off first base for the final out of Game 4. Naturally, Fox missed the dramatic play because they were too busy focusing on an attractive female Cardinals fan amidst their 854 crowd shots to be bothered to televise the baseball game taking place in front of them. If Fox's error wasn't enough, the Cardinals radio booth was openly laughing at the Red Sox for holding the runner on right before the pickoff. About that…

Not one, but two veteran NBA play by play men called a Trevor Ariza airball as though it went through the hoop during a Wizards-Pistons game in February. Even worse, both Steve Buckhantz and George Blaha made the errant call for a potential game winner at the buzzer, with Buckhantz's mistaken "DAGGER!!!" call particularly mortifying. As we later learned though, the announcers' poor location at the Verizon Center may have had something to do with it.

2) The worst debut ever for a sports show

We travel to South Africa for our #2 blooper and the exciting debut of Game On! Once you get past the numerous errors, awkward silence, and nervous looks that say "God, please get me out of here" it's actually not that bad!

1) The worst debut ever… period

On April 20th, very few people knew the name A.J. Clemente. On April 21st, he was world famous thanks to the Boom Goes the Dynamite of news intros. Thinking he wasn't yet live, his first words on his debut telecast on KFYR in Bismarck, North Dakota were "f*cking sh*t!" Clemente was fired from KFYR, but he became something of an internet celebrity making appearances on morning shows and late night TV. At last check Clemente returned to work as a bartender in Delaware, because there's nothing quite like a swearing bartender.