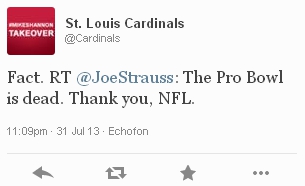 The NFL made waves when they announced big changes for the 2014 Pro Bowl. A fantasy draft (similar to the one for the NHL All-Star Game) will be used to determine the two teams with Jerry Rice and Deion Sanders serving as captains. Plenty of new rules were added to the game itself in an effort to liven up the mostly boring exhibition.

As you can see above, the official St. Louis Cardinals account commented on a thought from St. Louis Post-Dispatch writer Joe Strauss. Known for his strong opinions and somewhat arrogant nature, Strauss applauded the NFL for killing off the Pro Bowl as we knew it. The Cardinals agreed, adding "Fact."

The Tweet was quickly deleted, but not before we were able to grab a quick screenshot. The individual responsible for the Tweet probably meant for it to go out under their personal account, but they made a rather embarrassing error. A Cardinal sin in the social media world, if you will.

Is it really that hard to run your professional social media account and your personal Twitter account through different apps on your phone in order to avoid confusion and to prevent errors like this one?

Which event is dead again?