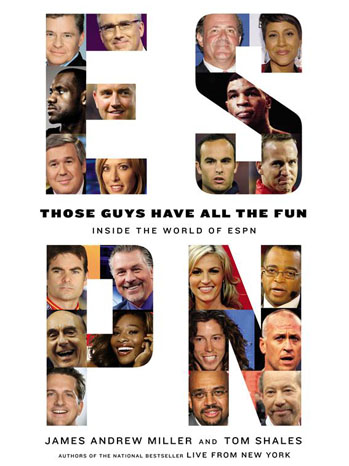 It's been quiet (almost too quiet) on the proposed film adaptation of Those Guys Have All The Fun, the best-selling oral history of ESPN. I've been crossing my fingers that the movie would cut through the often hard to navigate red tape and politics of Hollywood because a) I do think it would be a great movie b) this site would eat it up c) It would be a rare opportunity for me to be one of those "Oh the book is SOOO much better than the movie" assholes.

To some degree I was beginning to give up on the film materializing as momentum is key when trying to get a film made and the trail had gone cold. Flash to yesterday when The Wrap delivered this bit of good news for fans of the book:

"Always on the lookout for smart projects in turnaround, Focus Features has acquired screen rights to “ESPN: Those Guys Have All the Fun” and attached Derek Cianfrance to direct the film, TheWrap has learned.

Book is an oral history that chronicles the formation of the Worldwide Leader in Sports.

20th Century Fox acquired the book by James Andrew Miller and Tom Shales back in July 2011. Several months ago, Fox put the movie into turnaround, though Focus has come to the rescue, recognizing the project’s potential."

This is really awesome news for several reasons.

1- When films fizzle out with a studio, that's usually a mortal blow. I'm a fan of Focus and given they've made a financial investment to bring the rights over to their lot, I'm optimistic that a film adaption will come to fruition.

2- Derek Cianfrance is pretty damn awesome. He's the director of Blue Valentine, which I thought was very well done, but I'm guessing that has a smaller audience overlap with this audience than The O'Reilly Factor and The Daily Show. His most recent film, The Place Beyond The Pines, was a film I really enjoyed although a lot of folks were not happy with the length of the film and were not fond of the third act of the movie. Here's a trailer for those interested in getting a feel for his artistic style. If you've missed his two feature films, the recent Dick's Sporting Goods commercials featuring high school teams communicating in between plays and pitches are directed by him. When Grantland does an article on how good commercials are, that's probably a good sign of the prowess of the director in question.

3- I'm guessing the total proposed budget of the movie got a haircut in going from Fox to Focus, a smaller studio. That said, Cianfrance has shown amazing ability to put quality films on very modest budgets. Blue Valentine was done for $1 million with The Place Beyond The Pines being done for $15 million. Both films were able to attract top tier actors (Ryan Gosling, Bradley Cooper, Eva Mendes, Ray Liotta) willing to take reduced compensation or compensation on the back end as is common for films done outside of major studios. Many believe The Place Beyond The Pines will garner some acting Academy Award nominations, which would further bolster Cianfrance's ability to attract tier one talent to the project.

That said, the project is not through the woods yet (but it's probably moved to the place beyond the pines….lame joke, shoot me) as there are still some hurdles in the way.

First is the fact that there is no script. From my years of watching Entourage, I've gleaned that scripts are a crucial element to a film project. They can either fast track a project or derail one. If you recall in the days leading up to Moneyball's planned filming, a final script came in and even at the 1 yardline, the revamped script led to Sony pulling the plug. A new script was penned and a new studio, new director, and new cast had to be assembled in order to bring it back to life. Without Brad Pitt's dedication to the project, it likely would have likely fizzled out.

Which leads us to a second issue that at this point – there are still no actors attached to the project. This probably isn't crucial given the book leads to a more ensemble cast, but getting some people pegged to the movie will help the movie's viability in terms of going into production.

The other thing to look out for is the fact that Cianfrance recently signed on to direct The Light Between Oceans, so it's possible that the ESPN project may have to get in line for Cianfrance's services although nothing is definitive at this point. I did not read The Light Between Oceans, but I'm hoping the commercial appeal of the ESPN project puts it ahead in line of a movie about a guy alone on an Australian island who apparently decides to get married.

There was little insight as to why Fox opted to not move forward with the project and opted to sell the rights to Focus, but I wonder if the launch of FS1 played a role. I have no idea if corporate politics trickle down to the movie studios in terms of what projects are selected for development, but it's something to think about.

The bottom line is that without a script, shooting date, or cast, we've likely got a couple of years at a minimum before this would materialize onto the big screen. All that said yesterday's news was a positive development for those hoping to see the the origins of ESPN chronicled in film.