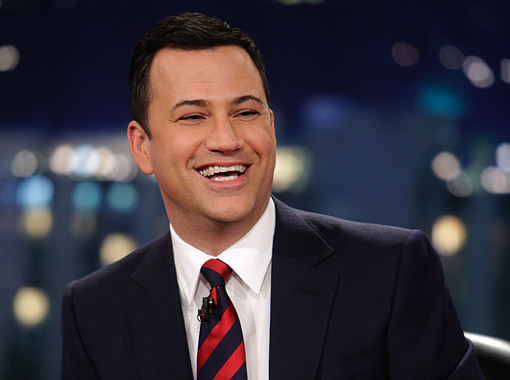 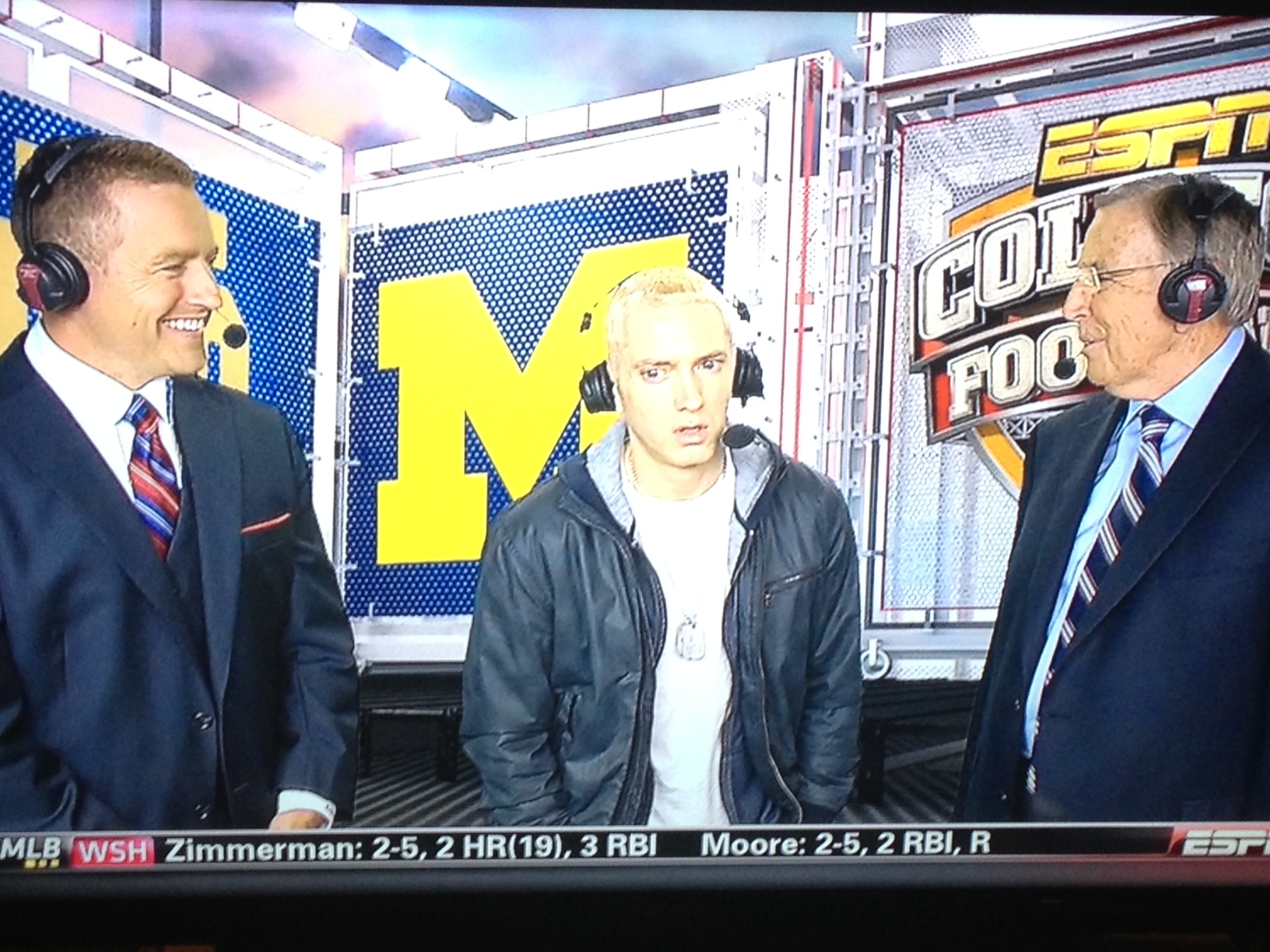 Mr. T, Barbra Streisand, Christian Slater, Jimmy Kimmel, Sarah Silverman, a Guy Fieri impostor and most recently, Eminem. What do they all have in common? Very awkward in-game interviews that left viewers scratching their heads. Going back to the very early days of Monday Night Football, the in-game celebrity interview has been a major part of sports television. However, unless the celebrity turns his or her personality on, the interview rarely comes off well. Maybe in the case of Silverman, the personality had to be turned off. No matter these interviews usually bring the broadcast to a screeching halt because the announcing team is distracted from the action and has to pay attention to stroking the celebrity's ego.

It's taken a few days, but we have compiled a list of some of the most awkward celebrity interviews in the history of sports television. We've tried to add video wherever possible. In other cases, your humble writer will try to recreate the moment. Feel free to add a celebrity interview. There could be a follow-up post in the future. 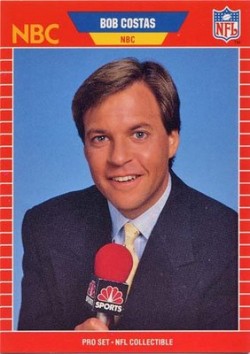 NBC was televising Super Bowl XVII between Miami and Washington and scheduled the premiere of "The A-Team" to follow the game. So the producers sent a young Bob Costas to interview the star of the show, Mr. T. Just as he is now, Mr. T. was known for his Mandinka hairstyle and flashy gold jewelry. Costas in his infinite wisdom asked, "I speak for most Americans in asking when you'll get rid of the jewelry, ditch the angry young man thing and slip into a nice three-piece suit and a pair of Thom McAn's." If you're not aware, Thom McAn was a shoe store chain that sold "comfortable" footwear. Needless to say, Mr. T. paused and stared at Costas to which Roberto thew it back to announcers Dick Enberg and Merlin Olsen who continued their commentary of the game.

On an Awkward Scale of 0 to -10, minus 10 being extremely awkward, this gets a -4 as it was also amusing as much as it was awkward.

I remember watching this live. Andre Agassi was playing an early round match and USA Network's Michael Barkann interviewed the famous actress/singer. An aside, wasn't it great when USA Network aired sports? Anyway, this was a period when Agassi and Ms. Streisand were quite friendly and there were rumors that they were dating. I'm not sure if they were actually dating, but in this clip, you'll hear Streisand gush over Agassi almost to the point of Thom Brenamman glowing over Tim Tebow. I'm not kidding.

On the Awkward Scale, this receives a -9. Very awkward. 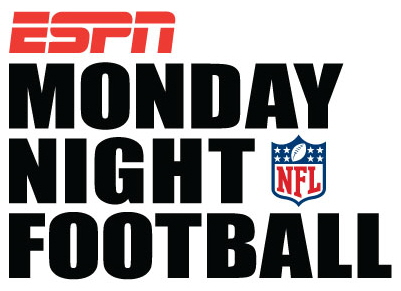 This begins a series of strange Monday Night Football interviews. When ESPN obtained the rights to MNF in 2006, the network tried to imitate the early days of the series by bringing in celebrities to supposedly increase viewership. ESPN forgot that it was a sports network and fans were watching the game for the action not for the celebrities. So Mike Tirico, Tony Kornheiser, Joe Theismann and later, Ron Jaworski were stuck talking with celebrities who just didn't care.

Example A was Christian Slater who for some reason made an appearance on MNF. To this day, it's not known what Slater was promoting or why he was in the booth. Tirico asked Slater if he was a football fan and the response was "I have a lot of friends who are football fans." Try to find a video of this interview. ESPN is so embarassed about this period, it has wiped all evidence of this interview from YouTube.

On the Awkward Scale, Christian Slater receives a -15. Extremely awkward.

While Kimmel has been in the news lately for that fake twerking video, he was also in the news back in 2007 for a very funny appearance on Monday Night Football that got him banned from the series. This is on the list more for the end result than the actual appearance.

During the New York Giants-Atlanta Falcons game, Kimmel entered the booth in the third quarter and proceeded to napalm the announcing team of Tirico, Kornheiser and Theismann replacement Jaworski.

Kimmel commented that it was Jaworski who got Theismann fired from MNF. Kimmel also asked Mr. Tony and Jaws if they had ever bet on games. Kimmel's funniest comment was "I'd also like to welcome Joe Theismann, watching from his living room with steam coming from his ears."

However, ESPN did not find it funny and announced the following day that Kimmel would no longer appear on Monday Night Football. It didn't matter as the following season, the celebrity interviews were killed.

Two weeks after Kimmel's appearance that put the MNF celebrity interviews on life support, the barely audible Russell Crowe killed them off for good. During the Indianapolis at Jacksonville game, Crowe came on to plug his movie, "American Gangster" and discuss the Australian rugby team that he owned. Instead, he was interrupted by a safety and a commercial break. When it was time for him to talk, Crowe mumbled so much that he was barely understandable. By the time Mike Tirico bid him goodbye, viewers were wondering what had happened.

On the Awkward Scale, this gets a -7.

You can argue whether Guy Fieri is an actual celebrity, but the man has his own Food Network show, has hosted an NBC game show and currently owns several restaurants. In this interview, Guy Fieri Impostor barely says anything, pulls out the cell phone and blows off the reporter. The interviewer does his best to question Impostor while genuflecting at the Guy Fieri altar.

Soon afterwards, the real Fieri went on social media to declare that it was not him on Fox Sports Kansas City nor was he in KC at the time.

On the Awkward Scale, we award a -8 for this very strange interview.

Unlike AA Fearless Leader Matt Yoder, I am a fan of Sarah Silverman, but like our Fearless Leader, I was wondering why Fox had the comedienne appear during a primetime Red Sox-Yankees game. Apparently, Fox did not learn the lessons from ESPN's Monday Night Football celebrity interviews.

Sarah's interview interrupted the flow of the game and while as a fellow New Englander it was nice to know that she grew up a Red Sox fan, it was painful to watch Joe Buck carry her along to fill the 5th inning. Tim McCarver sat like a potted plant not knowing what to do.

And while Sarah did not reference any of the current players, she did refer to former Pittsburgh Pirates pitcher Doc Ellis who admitted to pitching on LSD back in the 1970's. Buck tried to hush-hush her. And at the beginning, she made reference to "Massholes," what Massachusetts residents lovingly call themselves, but Fox excised it from the broadcast. At end of the video, Joe and Sarah did not know the delay bleeped it out.

The Awkward Scale gives this interview a -6.

No need to rehash this interview as it's still fresh, but here's the video so you can enjoy it again.

The Awkward Scale awards this a -10, but it still doesn't surpass the Christian Slater interview for Most Awkward.

That concludes the Most Awkward In-Game Celebrity Interviews. Again, feel free to add your own in the comments below. There could be a sequel if there are enough responses.